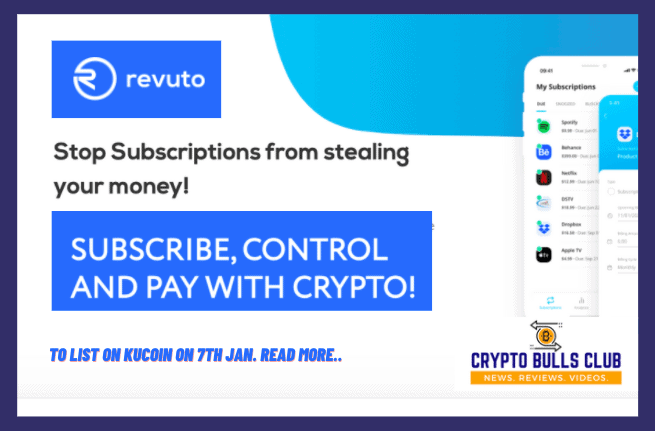 Cardano’s first native asset Revu is going to be listed on Tier 1 centralised exchanges including Kucoin and Gate.io on 7th of January 2022. Revuto is a Cardano dApp that manages subscriptions for customers by leveraging blockchain, mainly defi. Till date, it has already acquired more than 3 million early signups, making it ones of the leading fintech startup throughout the world. At present, the early signup campaign has been paused.

It is now paving the charge by listing REVU, the native token of Revuto on the two centralised exchanges. With the early success of the subscription economy, more and more traditional firms are adopting the subscription model.

Revuto in its early days, raised 10M in a few minutes during their ICO. Revuto’s wants to revolutionise the way customers save their energy, time, and money through their personalised subscription management dashboard.

Revuto is a Cardano-based dApp which uses cryptocurrencies to assist the users to manage as well as pay for their debit and credit card subscriptions. The ultimate goal is to assist users in better managing their subscriptions as well as trying to save money.

In our daily lives, we all spend money for at least 2-3 subscriptions per month on an average, and then forget which card was used on which website.

By the time we know, it’s too late. The amount for another month is already deducted. With Revuto’s subscription economy, you can stop that from happening and as a result, you could save money. Every penny saved is one more penny earned.

In this sense, Revuto would assist the user in paying for the subscription expenses at a lower cost than they might with their own debit or credit cards by bringing the users to the Cardano Native token that is REVU.

Revuto customers would be allowed to add liquidity to the other Revuto customers on the subscription due date(s) as well as earn the money by working for them such as staking the REVU tokens in liquidity pools to generate yield.

Official Statement by the Team for Listing REVU

“After releasing the first Cardano mobile wallet, as well as smashing records with our tremendous growth, we are becoming the first one to list on tier 1 CEXs, KuCoin, as well as Gate.io with REVU,” said the team.

Various legal openings for our utility token were obtained from leading legal companies, covering both US as well as EU regulations, with audits currently underway and overseen by the global leader in blockchain security. They also said that they have teamed up with Skynet Trading to provide institutional-grade liquidity.

Our objective is to only work with the finest in order to provide the best products as well as returns to our clients and investors. This could take longer and be more challenging, but it is the best method to create long-term value.” Vedran Vukman, CEO as well as co-founder of Revuto, added his honest opinion.

REVU will be available for purchase by all Retail Investors

Individual investors could purchase REVU on KuCoin as well as Gate.io which would be starting from January 7th, 2022. If you would like to purchase Revu tokens, sign up on Kucoin now.