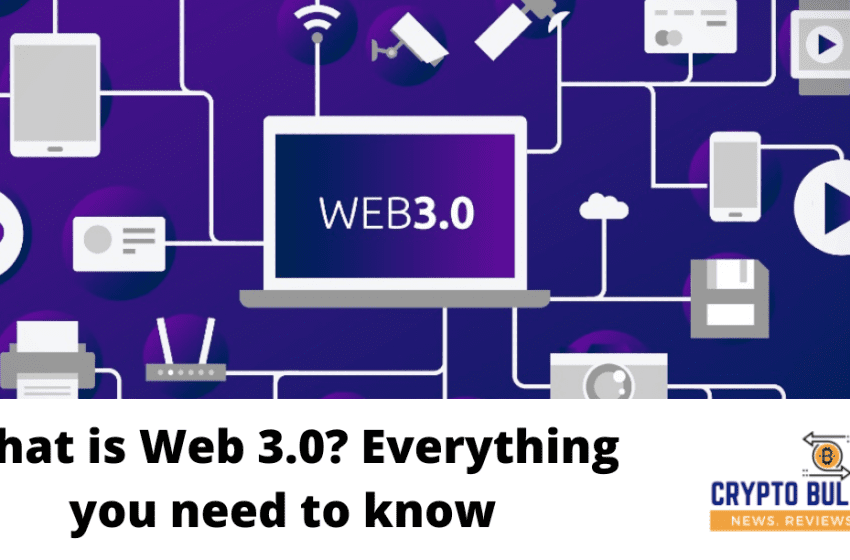 Imagine a different kind of internet which not only correctly translates whatever you enter, but also interprets what you say, whether that be through writing, audio, or even other media, as well as where most of the content you receive is more personalised than it has ever been. We’re on the verge of a new era in the advancement of the internet. It’s been dubbed Web 3.0 by some early adopters.

There really are some few early-stage Web 3.0 apps that currently exist, but it’s real potential can not be seen till the new internet is fully integrated into the web infrastructure. Read further to know what Web 3.0 really is, its characteristics and how it would impact our lives.

Tim Berners-Lee, the creator of the World Wide Web, dubbed Web 3.0 the Semantic Web, with the goal of creating a more independent, knowledgeable, as well as open internet.

Data will indeed be interconnected in a decentralised form, which would have been a big leap ahead from our present generation of the internet (Web 2.0), wherein data is largely housed in centralised repositories.

Users as well as machines will indeed be capable of engaging with data as well. However, programmes must be able to comprehend data either conceptually as well as contextually in order to make that happen.

It is the third phase of the web’s growth, often known as that of the read-write-execute stage, and it relates to the web’s future. Artificial Intelligence (AI) as well as Machine Learning (ML) allow computers to process data in the same manner that humans do.

Web 2.0 is a two way Interaction. For a reader, the user experience is more personalised. Readers not get the info they want, they also see ads of their interest. Here, the readers not only find information from the pages they visit, and the websites also collects data from the readers or their users i.e their likes, interests, pages they visit, how much time they have spent on that page etc.

Centralised websites like Youtube, Facebook use these data to make the user experience more friendly, and personalised ads can be served accordingly. Web 2.0 is basically selling data to advertisers at the cost of your privacy.

Web 2.0 has brought a new wave of users to internet. Here, you can login, share text, images, videos, data, audio and do what not. At the same time, all of your interest is also shared with the website though machine learning.

Unlike web 1.0, your screen view can be entirely different from another user. From my understanding, the only problems associated with Web 2.0 is Centralisation and Privacy. Now, that we have simplified web 1.0 and web 2.0, let us now understand what web 3.0 is.

Web 3.0 is all about solving the two major issues of Web 2.0. i.e Centralisation and Privacy using blockchain technology and decentralisation.

In Web 3.0, you are the owner of your content, and the content is stored in multiple computers across the globe. This is done, to ensure proper decentralisation.

Here, digital identity is not linked to your real identity. You can download, store, upload, interact as a user and do all the things you could have done in web 2.0 without compromising your privacy. You could stay anonymous.

As consumers and developers, everyone can accept that the web has evolved considerably over time.

There is absolutely nothing wrong with Web 3.0, the idea. However, a lot of companies are using the term, or the idea for their own benefit.

What does Elon Musk and Jack Dorsey think about Web 3.0?

There was a Twitter thread where Jack Dorsey and Elon Musk discussed that Web 3.0 is not a reality yet and it is just a marketing buzz for now. VCs are using LPs to make money in the name of Web 3.0

While what he said is not not true, but we should also not ignore that web 3.0 is a threat to companies like Twitter of which Jack Dorsey is one of the founders.

Web 1 vs Web 2 vs Web 3: Understanding the Differences

Web 1 refers to the very first stage of the World Wide Web’s development. There have only been a few content producers on Web 1, and indeed the great percentage of clients remained content users. Individual internet sites were common, and almost all of them were dynamic pages hosted on Internet service web applications or free internet server applications. It’s appropriate for use as a personal site.

Web 2.0 relates to websites that emphasise user-generated data, accessibility, as well as interoperability for end users all over the world. The participative social web is another name for Web 2.0. It doesn’t refer to a change in a technical definition, but rather to a change in the way Web pages are built and then used. The transition is advantageous, although it does not appear to be the case when the changes occur. Web 2.0 allows people to communicate and share with one another as creators of user-generated content in an online world. Web 1.0 is a form of Web 2.0 that has been upgraded. For example: Facebook, Twitter etc. Here, you, I and anyone using the platforms can create their own content and upload.

Web 3.0 refers to the growth of web usage as well as engagement, including the conversion of the Internet into a database. It allows the web’s back-end to be upgraded after a long period of focusing on the front-end.  Web 3.0 is indeed a that is being used to define several different paths of web usage as well as engagement. In this case, information is shared rather than owned, and different services display different perspectives of the same site / data. Web 3.0 connects decentralisation.

We may expect a significant convergence as well as symbiotic interaction between these three technologies as well as other disciplines since Web 3.0 networks would run via decentralised protocols, the foundation elements of blockchain as well as crypto technology. Smart contracts would allow them to be interoperable, seamlessly linked, and mechanized.

Whenever you hear about Web3, you’ll realize that cryptos are commonly referenced. Because most of these protocols involve cryptocurrency, this is the case. Anybody who wants to help build, manage, or upgrade one of it’s projects will receive a monetary reward (tokens).

What is it about Web 3.0 that makes it so unique?

The most significant advantage of Web 3 is that it aims to address the most important problem that has resulted in the emergence of Web 2: the collection of personal information by private networks, which will then be sold to marketers or possibly by malicious hackers. The Web 3 network is decentralised, which means it isn’t controlled by a single entity, as well as the decentralised applications (apps) built on the top of it and are accessible.

We really do have to examine  the four essential features of Web 3.0 to truly comprehend the next stage of the internet:

My final thoughts on Web 3.0

The new internet would offer a much more personalised and customised surfing experience, as well as a smarter and much more human-like research helper and other decentralised benefits, all of which are supposed to contribute to a more equitable web. It will be accomplished by allowing every individual user to take control of their data as well as enhancing the overall experience through a variety of innovations which will be implemented while it’s in place.

Almost all of today’s ordinarily offline machines, ranging from household appliances such as ovens, vacuums, as well as refrigerators to all modes of transportation, would become part of the IoT economy, engaging with its autonomous servers as well as decentralised applications (DApps), trying to advance modern digital worlds like blockchain as well as virtual assets to power a slew of innovation “miracles” for the twenty-first century. This concludes the article. I hope you found this article helpful. Please let us know if you require any additional assistance in the comments below.