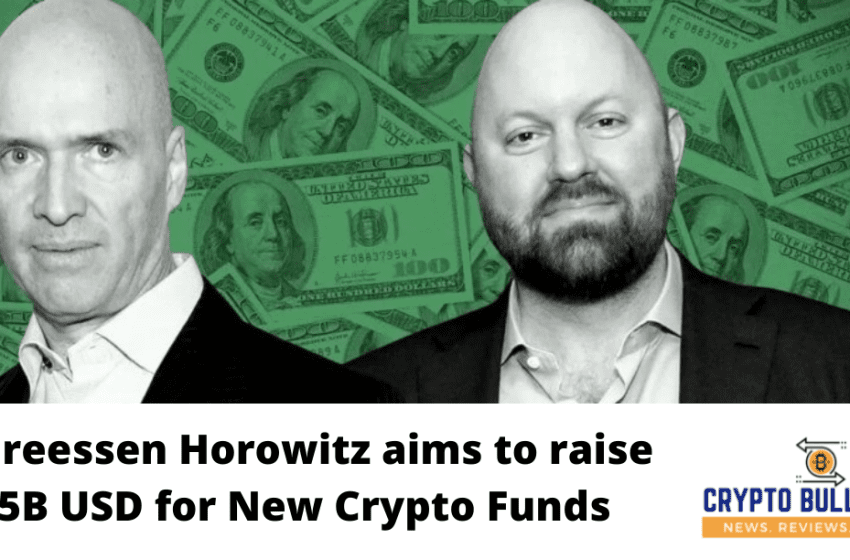 Bengaluru, January 20th, 2022: According to a source in the Financial Times, Andreessen Horowitz (A16z), a venture capital firm that has invested in Protocol Labs, Polychain Capital, as well as Opensea, among many others, is looking to raise $4.5 billion for its latest fund, which also will concentrate only on cryptocurrency.

This total is much more than double the size of its previous cryptocurrency fund, which was created in June 2021 as well as raised $2.2 billion. If the fund succeeds, this will be the company’s fourth large investment. Its initial fund raised $300 million in 2018, as well as its second fund raised $515 million in 2020. It handles roughly $3 billion in investments in crypto firms as well as protocols throughout the three funds.

Andreessen Horowitz (often known as “a16z”) is a Silicon Valley-based venture capital firm which backs daring individuals who are inventing the future via innovation. It was established in 2009 by Marc Andreessen as well as Ben Horowitz. They invest in early to late-stage technology startups in the consumer, enterprise, bio and healthcare, cryptocurrency, and fintech industries, and that they are stage neutral. The $2.9 billion Bio fund, the $3.1 billion Crypto fund, and even the Cultural Leadership Fund are among the $28.2 billion in assets managed by a16z.

Consideration for the entrepreneurs as well as the process of starting a business is central to the a16z approach. The business is run by general partners, most of whom are previous founders/operators, CEOs, or CTOs of successful technological firms with domain expertise.

Entrepreneurs, investors, administrators, engineers, researchers, industry professionals, and many others in the technological ecosystem would be connected by the firm. The firm  assembled a team of specialists that includes technical as well as executive expertise, leading media and marketing sources, Fortune 500/Global 2000 firms, as well as other technology decision makers, influencers, including key opinion leaders.

The operating teams give entrepreneurs exposure to skills as well as insights throughout the whole spectrum of company building as part of a16z’s commitment to serving their portfolio firms to expand their businesses.

Andreessen Horowitz’ venture capital business reportedly indicated last week that it could seek $3.5 billion for its VC fund and then another $1 billion for Web3 seed investments, with intentions to be unveiled in March.

The first fund would be used for investment in cryptocurrency start-ups as well as ventures that are looking for funding, whereas the second fund would concentrate on digital tokens as well as currencies.

A16z (Andreessen Horowitz) has invested in various crypto-friendly gaming platforms, the much more current of which is Carry1st, the company’s first investment in an African venture. A high-powered delegation from the venture capital business met with congress members as well as members of the administration in the U. S. in October 2021 to explore crypto regulations.