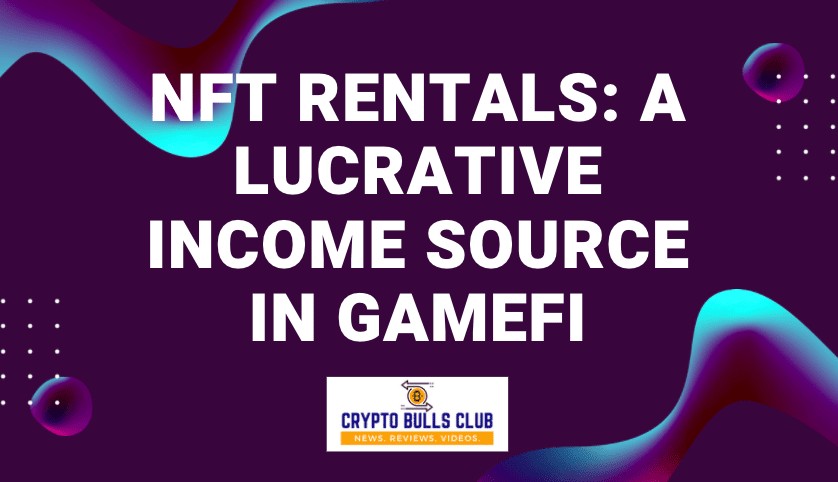 If NFTs were the hottest topic of 2021, then GameFi and Play-to Earn certainly weren’t too far behind. Games like Axie Infinity burst onto the crypto scene with a bang, causing gamers, gaming studios, and investors to take notice.

The GameFi industry has seen significant growth in the past twelve months, with Axie Infinity alone surpassing $1 billion in sales and 3 million Daily Active Users (DAU) in December 2021. With gaming industry giants like Ubisoft joining the fray, the GameFi sector shows no signs of slowing down.

As these games continue to become more mainstream, more people are beginning to discover the earning potential of playing such games. However, not all GameFi income streams are easily accessible. Read on to see how NFT rentals are literally ‘changing the game.’

How GameFi Has Opened Up NFT Earning Potential

Titles that are considered GameFi may have entirely different financial elements. However, asset ownership, a concept central to almost all blockchain games and made possible by NFTs, is perhaps the most common means of GameFi revenue.

By owning NFTs, players can participate in a game’s play-to-earn ecosystem. This mechanism allows players to receive financial rewards for completing various in-game tasks, such as winning tournaments and unlocking hidden items.

NFT assets can also be sold to other players for profit. For example, players can sell NFT in-game items such as weapons, armor, characters, etc. The rarer the item, the more it can be sold for on the marketplace.

The Challenges With Current GameFi Monetization

New Axie Infinity players, for instance, must first acquire three Axies before they can even start playing. The problem is, a ‘cheap’ Axie can cost hundreds of dollars. Some rarer Axies can even range in the tens of thousands! Therefore, players who lack the financial resources to buy these NFTs cannot participate in the play-to-earn ecosystem.

On the other hand, some gaming ecosystems are filled with a large number of NFT holders who do not actively participate on the platform. These holders are either waiting to sell their NFTs for substantial profit (using the NFT only as a trading asset), or they simply do not have time to play. Either way, these NFT owners are simply sitting on assets that do not function as an income source.

Another GameFi monetization strategy that is quickly gaining traction is NFT rentals. This gives NFT owners the option of leasing their digital assets to other players as an alternative to selling them.

NFT rentals ultimately bridge the gap between NFT holders who don’t have the time to play and players who do not have the financial resources to purchase entry NFTs.

In a typical lending/borrowing scenario, an NFT holder will simply lease their asset to a player for a fixed amount of time for a free agreed on by both parties. A smart contract system then ensures that the NFT is issued to the borrower, the rental fee is paid, and the asset is returned to the owner after the rental period expires.

All participants stand to gain from this arrangement. Firstly, NFT owners can earn significant passive income from their unused assets, while borrowers can participate in the play-to-earn ecosystem and earn tokens for their time spent in-game.

StarSharks, for example, has recognized the money-making potential of NFT rentals for players. Their ecosystem has a rental system that allows users to lease their StarShark NFTs to persons who want to enter the StarShark Metaverse.

Not only does this form of NFT lending make blockchain games more accessible, but they also create another avenue for tokens to circulate. This, in turn, generates liquidity and increases the utilization and value of NFT assets.

Are There Any Downsides to Renting My NFT?

One of the main concerns with NFT rentals is the reliance on third-party solutions outside of the gaming platform to facilitate the lending process. From the lender side, there is a risk that they can lose their NFTs. On the other hand, borrowers can risk losing their rental payments.

To eliminate these risks, gaming ecosystems, like StarSharks, have created their own built-in leasing marketplace with mechanisms to protect lenders and borrowers. These measures include:

NFT rentals are, therefore, set to push decentralized gaming to the next level by introducing new income streams for all participants (both lenders and borrowers). Additionally, the leasing system also helps break down accessibility barriers by allowing users with less financial resources to participate in play-to-earn ecosystems.

As a bonus, this system can boost volume and liquidity, which can have long-term positive impacts on the earning potential of the rental mechanism.