Blockchain Interoperability 2.0: The Biggest Challenges And A Possible Solution 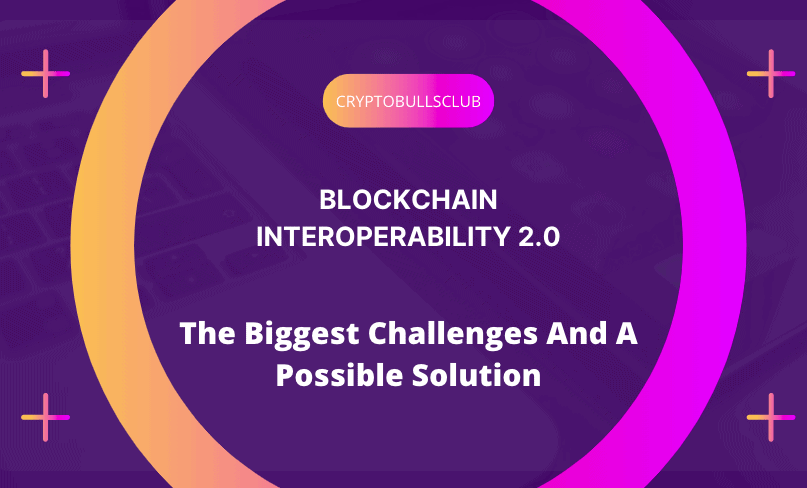 Over the past few years, the blockchain ecosystem has evolved dramatically, leading to a multi-token marketplace where thousands of “digital assets” worth billions of dollars are scattered across hundreds of individual blockchains.

However, a fundamental problem remains. The lack of interoperability between individual blockchains is one of the most critical challenges that permeate the entire crypto ecosystem while significantly impacting user experience.

The blockchain industry is still in its infancy, and accordingly, there isn’t any set of standards for how blockchains should interact with each other. As a result, most blockchains are not interoperable, which has turned out to be one of the significant challenges for developers and users alike.

Since most blockchains (and the projects developed upon them) operate in isolation, it is almost impossible for users to enjoy the actual benefits of blockchain’s distributed ledger technology (DLT). In the current scenario, three key factors lead to the problem of blockchain interoperability:

That said, the rapid development of blockchain technology ever since Ethereum entered the market with its smart contract capabilities has empowered several projects to unveil unique solutions to address the problem of interoperability. One such solution that is becoming increasingly popular among crypto enthusiasts is cross-chain technology.

A range of promising solutions has been developed in recent years, most of which have successfully solved the interoperability challenges to an extent. However, the first generation of interoperability projects is rather limited in speed, functionality, and scalability.

At present, there is no such interoperability solution that facilitates fast, functional, and inexpensive exchange of any digital asset across any chain. At the same time, most decentralized exchanges (DEXs) suffer from their own set of problems, including slow transaction speeds, a limited selection of tokens, and an inferior user experience.

This, in turn, has translated to momentum for centralized exchanges (CEXs), which are now wielding outsized control over what was supposed to be a “decentralized ecosystem.” Additionally, most of the existing CEXs and DEXs are overly focused on listing (and promoting) ERC-20 tokens, which effectively hides other network-based tokens seeking to gain mainstream attention.

Likewise, over-the-counter (OTC) trading, too, is accompanied by several hurdles. Since all trades are processed through layers of intermediaries (brokers, escrow service providers, smart contract providers, etc.), it leads to unnecessary costs and slow transaction times.

As is evident, the blockchain interoperability problem goes far beyond the simple ability of data and value exchange. Instead, it leads to many other security, scalability, and cost issues. On top of it, most interoperability solutions are primarily focused on catering to the needs of networks that share similar features and not the broader ecosystem.

Ushering In A New Era Of Blockchain Interoperability

Ferrum Network, a decentralized platform that allows users to exchange, manage, and transact their digital assets without entrusting them to a third party, is spearheading the efforts to address all of the issues of blockchain interoperability.

Any developer or project can build and deploy a solution on the Ferrum Network, thereby enabling multi-chain functionality instantaneously without navigating a multi-chain infrastructure or incurring exorbitant technical costs. Moreover, Ferrum also doubles up as a multi-chain blockchain-as-a-service (BaaS) platform, allowing projects to add deflationary mechanisms, token utilities, and advisory services across all networks.

At its core, Ferrum Network is a decentralized exchange (Fe DEX), wallet (Fe Wallet), and transaction network. It enables fast and inexpensive transactions for almost every token, regardless of the originating blockchain. All of the transactions occur through Ferrum’s DAG network, which is faster and cheaper than the wide range of existing decentralized networks. Accordingly, Ferrum addresses many of the existing problems plaguing the crypto space, including those of CEXs and DEXs, through its blockchain agnostic infrastructure.

The blockchain ecosystem needs interoperability to continue its expansion. Without interoperability, the fragmented ecosystems won’t deliver the greatest possible benefit to users. While the current infrastructure lags behind its deserved status, solutions like Ferrum Network will play a key role in tackling the existing challenges, thus unlocking countless benefits for projects and users through multi-chain blockchain interoperability.