TRON DAO and Other Blockchain Leaders Jointly Roll out USDD 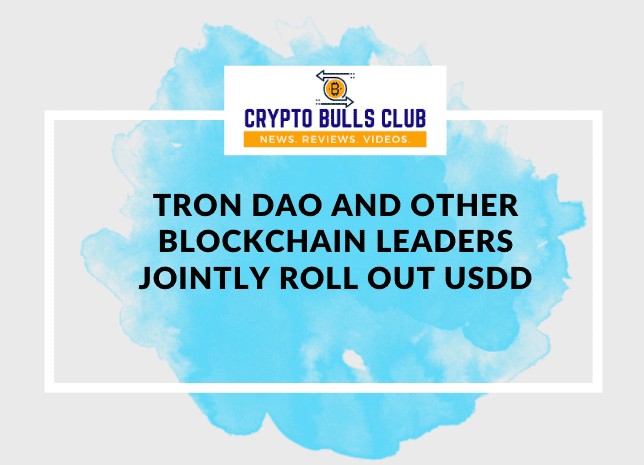 On May 5, Justin Sun, Founder of TRON, announced on Twitter that the TRON DAO Reserve rolled out a decentralized stablecoin named USDD, which has so far been listed on Sunswap, Sun.io, Curve, Uniswap, Ellipsis, Pancakeswap, Kyberswap, etc., with an initial total supply of one hundred million.  Through the cross-chain protocol BTTC, both  of the circulating supply on Ethereum and BSC are near twenty million. 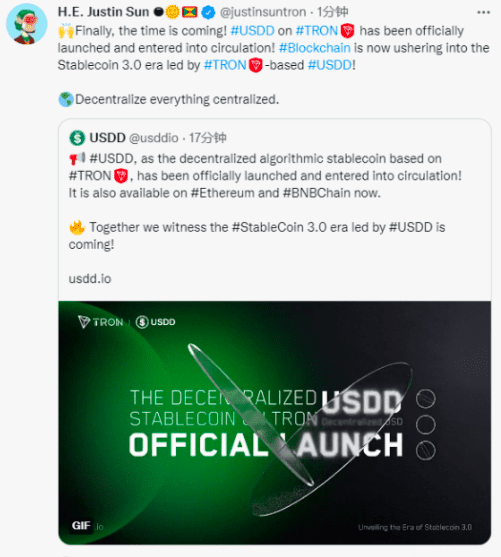 USDD is a decentralized algorithmic stablecoin launched collaboratively by the TRON DAO Reserve and top-tier mainstream blockchain institutions. The USDD protocol runs on the TRON network, is connected to Ethereum and BNBChain through the BTTC cross-chain protocol, and will be accessible across more blockchains in the future. USDD is pegged to the US Dollar (USD) through TRX and maintains its price stability to ensure users have access to a stable and decentralized digital dollar system that guarantees financial freedom. The website of USDD is now online (http://usdd.io). The contract address shall be subject to the announcement on the official website.

The addresses of Tron, Ethereum and BSC are:

USDD is a cryptocurrency issued by the TRON DAO Reserve with a highly stable price and diverse use cases. It is based on TRON and pegged to the U.S. dollar at a ratio of 1:1, which means regardless of market volatility, the USDD protocol will keep USDD stable at 1: 1 against the US dollar via proper algorithms in a decentralized manner. Like other TRC-20 tokens, USDD can be traded with no brokers; it depends solely on the smart contracts on the TRON network. Being free from the control of any individual or organization makes USDD more capable of playing its role as a stablecoin. As a fast, low-fee crypto asset with a large supply and competent for cross-border transactions, USDD brings its holders tremendous benefits of the blockchain technology without the risk of volatility.

According to available information, the TRON-based decentralized stablecoin USDD was born with the mission of building a modern financial system on the blockchain. Its permissions are managed by the TRON DAO Reserve, which functions as its early custodian. Also, the TRON DAO Reserve ensures USDD’s price stability and decentralization by collateralizing this cryptocurrency with reserves. This organization aims to safeguard the overall blockchain industry and crypto market, prevent panic trading caused by financial crises, and mitigate severe and long-term economic downturns. By setting risk-free interest rates and regulating the market through liquidity provision, it is able to stabilize the exchange rates of centralized and decentralized stablecoins on TRON and other blockchains. It also intends to formulate and implement monetary and exchange rate policies, play the role of a lender of last resort to minimize systemic risks and ensure the stability of the financial market.

On April 21, TRON founder Justin Sun tweeted an open letter stating that the TRON DAO Reserve, at its initial stage, would provide custody service for the $10 billion worth of highly liquid assets raised from initiators of the blockchain industry as an early-stage reserve, all of which would go to the TRON DAO Reserve in six to twelve months. The Reserve will continue to attract more liquidity assets into its reserves to better play its role as a decentralized institution.

After four years of growth, TRON has seen over 88 million on-chain users and 3 billion transactions in its ecosystem. At present, the circulating supply of TRC-20 USDT has exceeded that of ERC-20 USDT, making TRON the world’s largest stablecoin network, which boasts over $55 billion worth of financial assets, including on-chain stablecoins, and has settled and cleared $4 trillion worth of assets. In December 2021, the TRON network became fully decentralized and was restructured into the TRON DAO community, the largest decentralized autonomous organization (DAO) in the world.

At the end of 2021, Justin Sun was officially appointed by the government of Grenada as its Ambassador and Permanent Representative to the WTO and was authorized to represent Grenada at the WTO meetings during his mandate. Justin said that he would proactively promote the integration of cryptocurrencies and sovereign states to build a new financial system that is secure, efficient, and inclusive. In the meantime, he would also leverage his experience in the digital currency field for a joint response to the new challenges regarding digital transformation in the post-pandemic era.