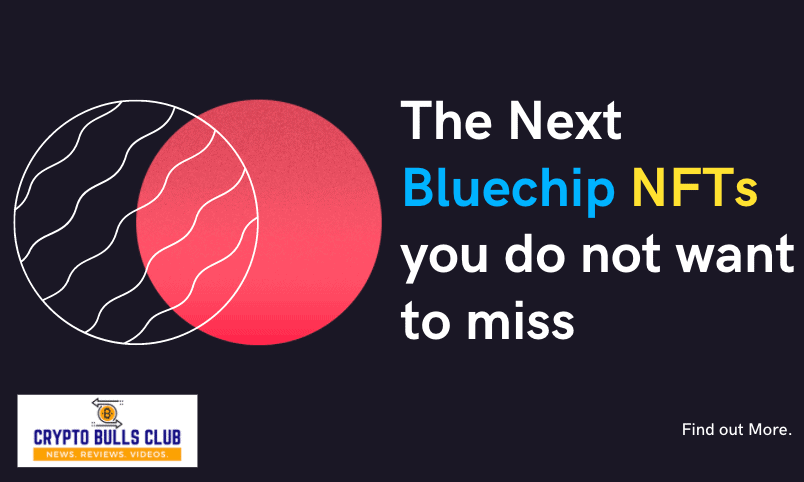 Non-fungible tokens (NFTs) are the hot topic in the Crypto scene, attracting the attention of not only collectors but also galleries and known artists in the art market. As a result, more and more well-known artists are dabbling in crypto art. However, this has the drawback of no one having a solid understanding of them

The term “blue chip” comes from a poker game in which the blue chips have the greatest value. Like Bitcoin and Ethereum, there are NFT “blue chips” that are expected to be around in five or ten years. Here are a few upcoming Blue-chip NFTs worth checking out!

Today’s most popular NFT projects are characters that folks use as their profile pictures on social media sites like Twitter and email. These projects generate 10,000 or so different varieties of their characters at random, some of which are more unique than others. An animated dog with gold fur, for example, could be ultra-rare, whereas that dog with a plain brown coat could be common. CryptoPunks was the very first project to use this model, and as such, it has a unique status. Buying a CryptoPunk isn’t cheap; the least expensive one is just under $40,000 at the time of writing, but it’s difficult to picture a situation where they won’t be important in the future.

Art Blocks is a collection of limited-edition digital art by well-known artists. Curated is the most prestigious of the company’s three distinct collections. If you had to choose just one, you should go with their first project, the Squiggle, which costs around $7,000 minimum. Fidenza and Ringers come to mind if you need two more. Most Art Blocks projects are soaring at the time of writing.

Punks Comic is a collaboration between NFT merchant and influencer Beanie and Pixel Vault, a media company founded to support the comic’s creation. You not only get access to the CryptoPunks multiverse, but you also get other financial benefits from a great team. Punks Comic, which starts at $2000, has a lot of potential in the NFT scene.

Each edition of the genesis ERC-721 PUNKS comic can be staked for the $PUNKS token.

The $PUNKS token is an ERC-20 developed by @fractional_art. The tokens are physical fractions of the actual CryptoPunks represented by characters in the PUNKS comic. pic.twitter.com/03X9i3Odvn

Zed Run is a 2019 game created by an Australian studio. It’s a virtual horse online game that’s the latest high-paying crypto to emerge from the NFT hype. Zed Run has reported that up to 11,000 horses have been auctioned, with another 8,000 being reared throughout 3,600 virtual stables. Rare horses, such as the golden polygon textured ‘Floyd Mayweather Jr,’ are now fetching $15,000 in the United States.

With an ape or a dog, take part in the Bored Ape Yacht Club. With a total sales volume of $567 billion, BAYC is currently the fifth most valuable NFT set in the crypto world. Prior to the last two months, the average price of an NFT from BAYC was less than $100,000. Today, however, that figure is $196,000.

The art project of 1,000 NFTs, which started at $40 almost six months ago, now has a base rate of $535K, a whopping 13,000% increase. Genesis CyberKongz prices soared after the project’s BANANA token was released, with each NFT earning 10 BANANA tokens per day. BANANA tokens are primarily used for breeding. Two  Genesis Kongz can be formed for 600 BANANA tokens to produce a BabyKong and a VX Kong. These are significantly bigger NFT collections, with current base rates of 11 and 1.6 ETH.

Because of their bright works of art and pleasant communities, Cool Cats has long been a top choice in the NFT space. After CryptoPunks and BAYC, which are regarded as the leading ‘blue-chip’ collections in the NFT space, the collection with 10,000 remarkable NFTs has become the third project to achieve the 10 Ethereum base value milestone. The Cool Cat NFT collection’s floor price has risen by 30% in the last week to more than 10 Ethereum, as buyers continue to pour into the booming NFT market.

VeeFriends is a hand-drawn NFT collection by  Gary Vee, which grants holders immediate access to the VeeFriends community as well as three-year access to VeeCon. The collection, which includes 10,255 tokens, targets to set an example for others in the industry by providing access, community, and real-world value through the smart contract. The market price for the least expensive NFT by this project is around $35,500.

Larva Labs, the creator of CryptoPunks, has released Meebits, a fresh collection of randomly generated NFT avatars. 9,000 Meebits were marketed for almost $75 million under 10 hours of their release in May of this year. You get access to various packs, along with the full 3D model, when you buy a Meebit. Meebits can be used almost anywhere as 3D characters, including in a variety of games. The collection quickly became a commercial success, selling millions of copies and topping sales charts. According to DappRadar, it is now the seventh most popular collection of all time, with over $127 million in overall sales.

Art is still a reliable long-term passion investment. Let us know which one has piqued your interest in the comments section.