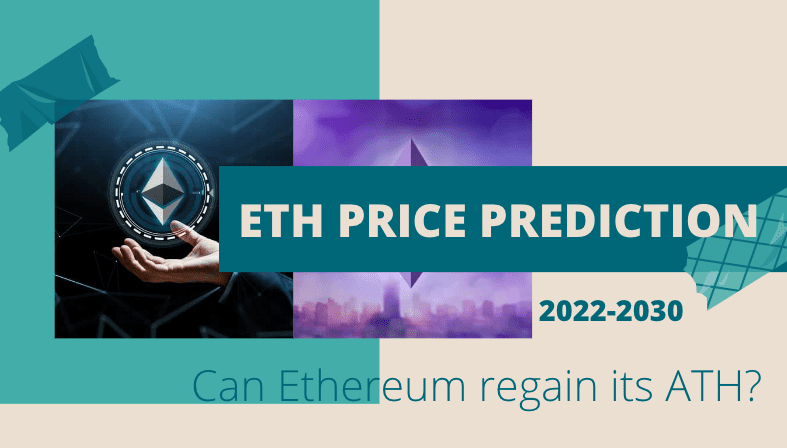 Cryptocurrency is rumoured to be the future of all financial transactions. With its growing demand and influence in the international markets, we can say that soon we’ll be paying and getting paid in cryptocurrencies instead of paper currency.

This article will be talking about a very popular cryptocurrency – Ethereum. It is the best altcoin to invest in, followed by like Solana, Algorand, FTM etc.

Ethereum is the largest decentralised open-source blockchain platform. It went live in the market in August of 2015 with an opening price of $0.7533, and has now become the second largest cryptocurrency after Bitcoin. Looking at its price now, the return on investment is at an annualised rate of over 270%, which is quadruple of what it began with. In January of 2018, it kicked off with a price 600 times higher – $1366.77,  than what it was in 2016 – $1.1896.

Let’s find out more about Ethereum and how its prices changed over the years and what it could be in the future.

Ethereum is a decentralised blockchain and smart contract technology (a command that automatically enforces the terms of the agreement based on a given algorithm). It is distinguished from the other cryptocurrencies by the symbol ETH. It has a diamond shaped logo resembling a pyramid.

It has a variety of uses like in gaming, advertising, finance, identity management, web browsing and supply chain management.

It can be used to build dApps which generate billions of dollars. It has more than a million users.

How to buy Ethereum?

Ethereum can be bought from the following exchanges :

How to buy ETH in India with INR?

You can buy Ethereum with INR from the following exchanges.

The market capacity on 08/08/2015 was $153.77 million and the year ended with a market capacity of 71.64 million. This was disheartening for the initial investors who put their money expecting good profits.

The year 2016 brought hope to the disheartened investors as the price seemed to increase from less than $1 to the highest of $20.59 which was the highest of that year. Those who bought ETH in 2015 at the lowered price earned little profit on their investment. The average price during this time was around $15 – $18.

The market capacity was as high as $1.67 billion and the year closed with a market cap of $696.99 million. This was the initiation of a recovery which turned out to become a great boost in the next year.

The market capacity increased from $715.05 million in the beginning to $73.17 billion at the end of the year.

The investors were very happy with the price rise of ETH.

Those who sold their assets at the beginning of the year, had huge profits, but those who misread the market and kept holding on to theirs, incurred heavy losses for the year.

After the devastating year, 2019 was a bit of recovery for a few months giving an opportunity to the people to reduce their losses. The price rose to a high of $336.75 but then again started falling down to $129.61 at the end of the year.

The investors began to lose faith in Ethereum looking at the great fluctuation in its price. The market was Bearish and ETH lost around 94% of it value.

It was said that the massive correction was because it was “oversold” with a below-30 Relative Strength (RSI) reading.

People were stuck at home due to Covid-19 and were out of options for earning money. So they began to invest in various markets. Bitcoin, Ethereum, Dogecoin were a few of them.

With new investors, the market was mostly Bullish and gave good returns.

2021 was a huge turnaround to the previous years. Though the year began with a price of $730.37, it skyrocketed to $4812.09 in August. The physical markets were closed since people were restricted to go out. The digital market boosted during this time and yielded huge profits to the investor.

It was proposed in several nations to introduce cryptocurrency as an official transaction token. This was promoted by several influencers like Ralph Gonzales, Rajash Karmakar, Mehdi E. Zadeh, Matthias Sunday.

2024 might be a great time for ETH enthusiasts who bought during the previous year as it might soar as high as $ 3220.23 USD.

Ethereum Price Expectations for Today, Tomorrow and This Month

ETH was Bullish in the beginning of the year but then it turned into Bearish in July.

Even this month (September) it’s a mix of Bullish and Bearish.

In October, it is predicted to rise by 5%, but after that it might slide down by 8%.

Will Ethereum ever reach $100k?

With the upcoming merge of Ethereum and the Mainnet, there is a high chance that it will reach the $100k mark. It is predicted that by 2028 it could reach $10k. So it might also reach $100k somewhere by 2050, seeing the high demand of the digital economy in decentralisation, security and programmable blockchain.

How much time does it take to mine 1 Ethereum?

It takes about 7.5 – 8 days to mine 1 ETH (depending on the graphics processor of the device you are using) NVIDIA GTX 3090 which hashes around 500 MH/s. If the hash rate of your device is lower, it could take much longer. However, post Etheruem Merge, you would not be able to mine Ethereum. It is changing its consensus mechanism from POW to POS.

Will Ethereum be profitable in the future?

If we look at the Ethereum price predictions and the demands of the digital economy rates, it is likely to say that ETH will soar to great highs and be very profitable.

Though there are certain possibilities that ETH could dip down due to uncertain situations. There are certain rumours that Netflix might be banning cryptocurrency related ad-services.

Will there be a price surge for Ethereum?

It is predicted that the price of ETH will be rising soon. It had grown in price by 600 times within 4 years of its introduction in the market. After the merge of the Mainnet and ETH, it is possible that the same might happen with its current price in the coming years. Traders like Michaël van de Poppe are promoting Ethereum making it stronger.

Ethereum is the most valuable cryptocurrency, if we look at the usecases. If any coin in the future would flip Bitcoin, for me it is going to be Ethereum.

Should Ethereum be held for a long term?

If you are a long term investor with good experience, it is suggested that you hold on to ETH for a minimum of 10 years and also purchase more in the meantime as its price might have a boost in the coming years, which could yield you huge profits.

However, if you are low on risk taking, you sell off after 5 – 7 years as there could be chances of a dip in its price depending on the various factors influencing the market. However, any downside might not be seen in holding it for the foreseeable future.

After reading this article about Ethereum and its price predictions, what do you think will happen with Ethereum by 2030? Share your thoughts with us in the comments.

Disclosure: The prices in the article, Ethereum Price Prediction 2022-2030, the mentioned prices are generated using AI, which could change according to the then market situation. Please DYOR before investing your money in ETH. The prices mentioned here do not guarantee the same results.