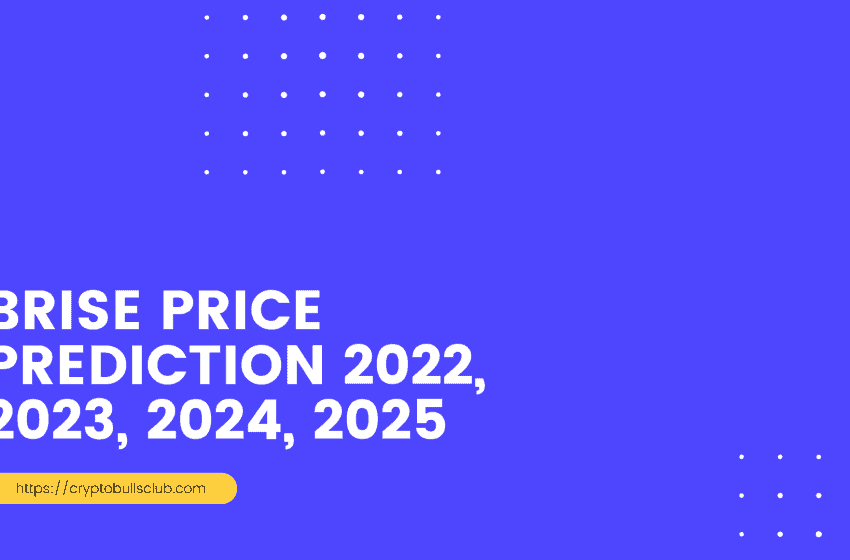 One of the top-performing crypto coins on the market right now is Bitgert, or popular known as BRISE. Infact, Bitgert continues to be the coin to keep an eye on this week as crypto experts have forecast the death of a few zeros. This high is feasible given the Bitgert bull rebound this week. The year 2022 has been a breakthrough year for the blockchain platform Bitgert and its native BRISE coin.

However, there is are some RED FLAGS! Keep reading.

In this article, we will talk about BITGERT, BRISE, and most importantly BRISE price prediction for 2022 to 2025. A lot of our readers have requested us to review the project and give our price prediction. And here, we did exactly the same.

The launch of the blockchain mainnet for the Bitgert network, which added smart contracts and the ability for decentralized applications, signified the network’s considerable advancements in recent months.

Since then, Bitgert has witnessed a large number of dApp releases, from non-fungible token exchanges to decentralized financial protocols.

Bitgert: What is it?

Bitgert claims to be a Zero-Cost gas fee blockchain. Basically, a smart contract platform, where developers can build dApps. According to Bitgert, their blockchain can process 100,000 transactions per second with almost no fees.

Developers can build decentralised apps, unrestricted expansion, regardless of cost, and security.

Beside smart contract, you can write staking contract, create Defi Apps, and mint NFTs on this platform.

However, when we click on those links, most of them were blank.

Bitgert was first introduced on the Binance Smart Chain, and it paid out incentives using Binance Coin. The project’s plan states that Bitgert initially debuted in July 2021 with the introduction of its website and the placement of its native BRISE coin on Binance’s DEX, Pancake Swap.

Before changing its name to Bitgert in December 2021, the project was once known as Bitrise. The biggest advancement in the blockchain project to far came in February 2022 when Bitgert introduced its native BRISE Chain, which was supported by the BRC20 smart contract. On the Bitgert network, developers can now create dApps thanks to the debut of its own blockchain network.

To provide quick block times and affordable costs, the BRISE Chain uses a method of proof-of-authority. In addition to being interoperable with the Ethereum Virtual Machine, the BRISE chain features smart contract functionality.

On the BRISE chain, developers can create wallets and other dApp-related tools, create new tokens, operate full nodes to get real-time updates on transactions, blocks, and consensus activities, and run full nodes to run new tokens. A significant part of the countless projects that have surfaced on the BRISE chain may be attributed to the advent of the network’s incubation program, Bitgert Startup Studio.

BRISE coin – What is it?

In the Bitgert network, BRISE is the native token. On the Binance network, it was first released as a BEP-20 token. The coin was changed into the native BRISE chain token following the introduction of the BRISE Chain. Users will receive staking incentives in BUSD when they stake their BRISE. Additionally, the BRISE dApp Wallet, which has no transaction fees, uses the BRISE token as a peer-to-peer payment method. By eliminating the need for a middleman, it enables direct exchange of cryptocurrency fees between buyer and seller.

The BRISE coin is now a more desirable token to keep thanks to the platform’s addition of a repurchase idea to cryptocurrency. The buyback strategy increases investor confidence to buy and hold the coin, hence aiming to raise both its price and demand. In the event that a sale takes place, a portion of the buyback tax paid is utilized to buy tokens from the liquidity pool, which are burnt right away after the buy.

How to buy BRISE?

It’s not too difficult to purchase Bitgert (BRISE). The Bitgert team actually made it simple for cryptocurrency investors to purchase the token. Observe the following three steps:

Pro tip to buy Birgert: Buy BRISE from Kucoin or Gate. Buying from Pancakseswap or decentralised exchanges will levy 24% losses. If you do not want to lose 24% to smart contracts, buy from Kucoin (link given above).

Bitgert blockchain: Everything You Need to KNow

In February 2022, Bitgert finally made its long-awaited blockchain public. The much-hyped promise of gas-free transactions never came to pass, and Bitgert instead switched to a near-zero transaction cost structure. The BriseChain’s block time is 15 seconds and it was created using a proof-of-authority consensus algorithm.

PoA blockchains are criticized for being extremely centralized, despite the fact that they are thought to be highly scalable. The Binance Academy states that this consensus algorithm paradigm is merely an attempt to improve the efficiency of centralized systems. While this makes PoA an appealing option for big businesses with logistical requirements, it does raise some concerns, particularly in the context of cryptocurrencies.

In short, BRISE may be faster, but it is very much centralised.

This project’s unique tokenomics is its standout quality. The Bitgert project aims to reward users. The team began rolling out goods a month following the Bitgert coin launch, with Bitgert Audits serving as the initial offering.

For Brise to reach 1 INR, the token price needs to go up by a lot of margin. We think BRISE may never reach 1INR.

What is the total number of Bitgert coins?

Uncertainty surrounds the quantity of BRISE in use. Although it is a self-reported number, CoinMarketCap’s value of 427.125 trillion is nonetheless significant. There may be a quadrillion units available at most.

Bitgert’s originator is unknown. There is no way to know whether the team members’ names and profiles are real, and there are no provided contact information. The request for such information on Telegram has resulted in blocking of users. Details about domain names are likewise concealed.

What is the expected price of Brise in 2040?

Is Bitgert a Scam?

It would be too early to call Bitgert a SCAM. However, there are definitely red flags as discussed above. One should trade with caution, if you want to buy and hold Bitgert for a long time.

We do not think BRISE can ever reach 1USD. This is because of the very high token supply.

BRISE News Or Rumor: Is BRISE going to be listed on Coinbase?

BRISE Coinbase listing for 1st September for now is just a rumor. The price increase we see now is based on the rumor. We do not think Coinbase is going to list BRISE anytime soon.

Investing in Bitgert: Is it A Good Investment?

So far, for investors, BRISE has given great result. On the Bitgert BRC20 blockchain, there are a tonne of projects in development, which will drive up the price of Brise even further. After successfully completing the delivery of the roadmap V1 in under 8 months, Bitgert has an excellent roadmap V2. Bitgert is a long-term project, as seen by the new roadmap V2, which goes as far out as 2025. The Bitgert initiative is unique because of how disruptive it is.

The crypto projects in the market with the most potential include Bitgert right now. The best cryptocurrency investment in 2022 may well be Bitgert, according to crypto analysts, who predict that it will surpass even the largest crypto ventures.

However, we see a few red flags.

and mostly what is said are good things about the project.

So, the price may go up for the time being, however, we feel BRISE is not a good investment.

Investing in Brise is nothing but a pure gamble.

We had seen a lot of crypto projects claiming high TPS, low fee failing in the past. BRISE could be another. If the team updates about the CEO, fixes their website, talks more about developing on their blockchain, building their ecosystem, then I may consider investing in BRISE in future. For now, I will stay away from BRISE.