What is Dogecoin? Doge Price Predictions and Analysis: 2022 to 2030 (Updated) 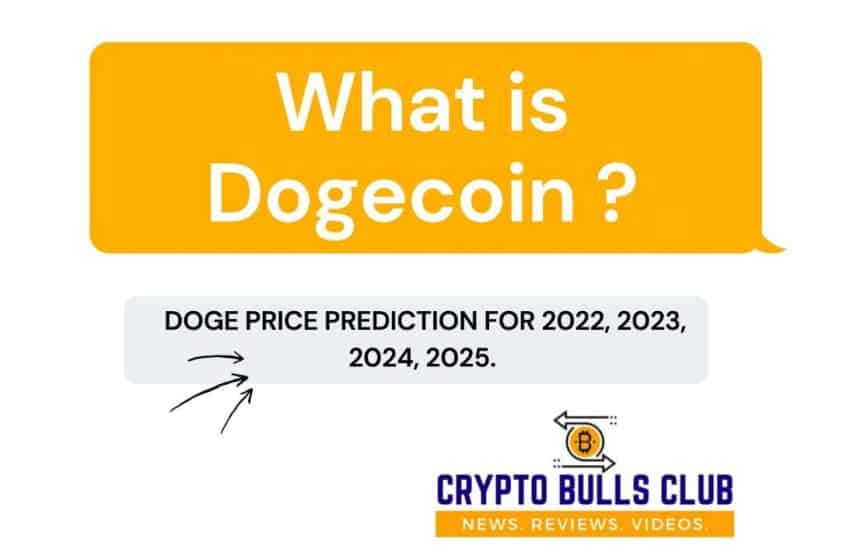 In this article, you will learn about the popular Dogecoin, its price history and Dogecoin price prediction from 2022 to 2030, where to buy the coin and an investment analysis. So let’s begin.

Dogecoin is one of the most popular cryptocurrency. It is similar to Bitcoin and Ethereum and is probably more known than most of the altcoins in the market. The origin of the coin was probably a joke but it is not a joke anymore. The coin has taken the crypto market by storm and has got investors hooked up to its bullish nature. It has exploded in popularity in 2021 and the prices have soared with the rising number of investors.

Let’s have a brief look at the prices of DOGE and how it is going to be in the upcoming years, but before that let us study what Dogecoin is. 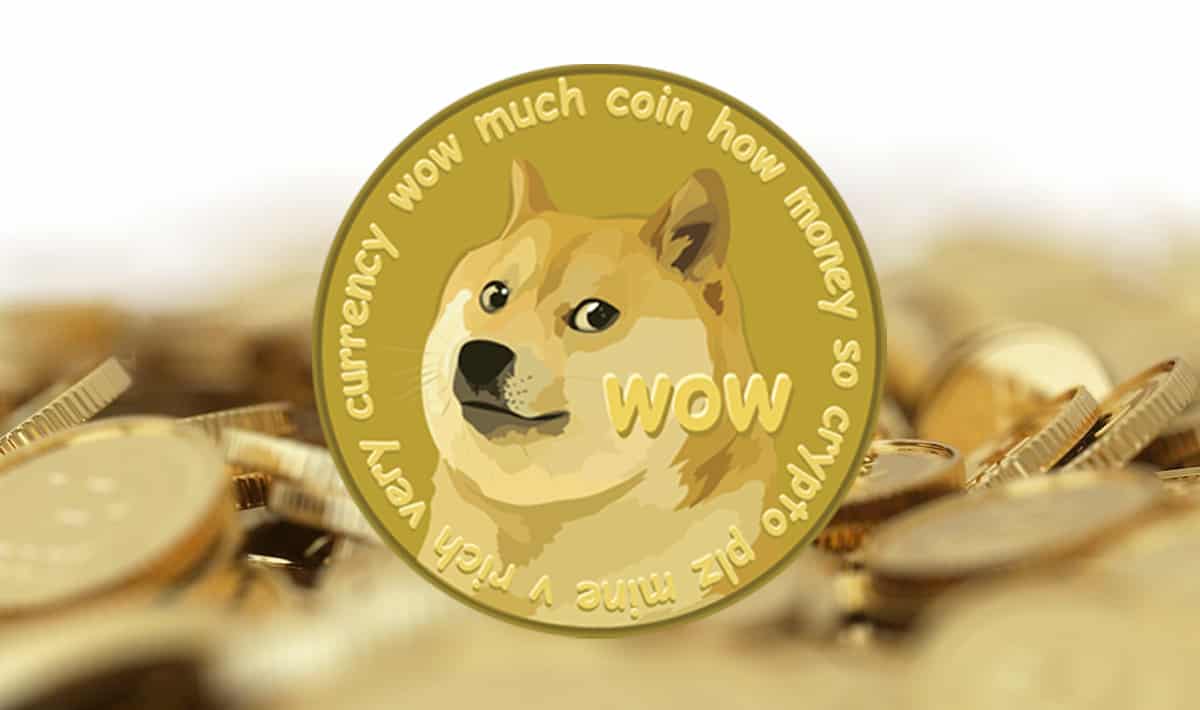 Dogecoin is a decentralised open source peer-to-peer digital cryptocurrency which is favoured by Shiba Inus worldwide. It is an altcoin based on a meme and the foundation of the coin is influenced by a joke. Dogecoin is different from the normal altcoins because of its amazing and vibrant community. The logo of the “Shiba Inu” dog, a breed of Japanese Pet dog on the coin sets it apart from the normal altcoins. But, the operation of the cryptocurrency is very similar to other altcoins.

The crypto was seemingly created as a joke to poke fun at Bitcoin, but it has grown to be a very popular and loved coin. Today Dogecoin is no joke, it has blown up and gained more than 5000% value in 2021. The token is one of the fastest-growing coins and it found its applications in transferring small amounts of money instantly with low trading fees. The fun and light-hearted cryptocurrency is one among the top 10 cryptocurrency in the world.

How to buy a Dogecoin?

You can buy Doge from the following exchanges. 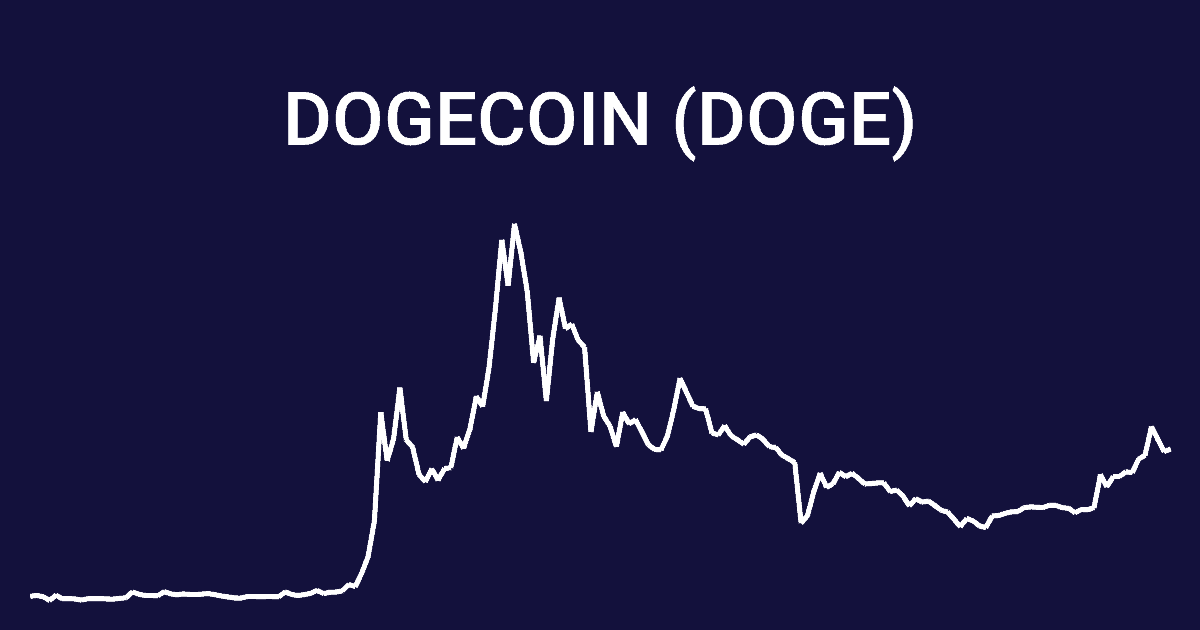 Dogecoin was launched in December 2013. The initial price of DOGE was set at $0.0002 on December 16th 2013, considering the fact that DOGE was born out of a meme and influenced by a joke. The developers wanted to build something that could challenge Bitcoin superiority in the market. The prices saw generic fluctuations in the same month and went as high as $0.001 on December 19th. The prices further fell down and reached  $0.0004 by the end of the year.

It was an unfortunate phase for Dogecoin when people started questioning its validity. The prices kept falling and ended up at $0.0001. A small recovery was noticed when the prices hiked up to $0.0004 in September but it was short-lived and the Doge started falling again. The DOGE price was recorded as $0.0001 on December 30th.

The prices remained below $0.0001 throughout January 2015. The fluctuations were limited and did not cross the barrier of the set price for a long time. Apparently the idea of a joke based coin didn’t fit well with the investors who were just settling in the crypto market. With no hope of rising, the prices further kept falling and reached $0.00009 on May 11th, 2015. It further recovered and went up as high as $0.0002 in June.

This hike was also not permanent and only resulted into a further downslide for the prices of Dogecoin which kept fluctuating around $0.001 throughout the year. A major reason for such a setback was because co-founder Jackson Palmer quit the project.

The price of DOGE was recorded as $0.0001 in January 2016 and continued to rise for the following months. The prices were almost constant from February to May when it ranged between $0.0002-$0.0003. A slight hike was noticed when the prices crossed the $0.0003 range in June, but it was instantly back to the same $0.0002 floor after June and it stayed that way till the end of the year. It was Unfortunate because Dogecoin also had severe competition in the market.

2017 was different. Dogecoin had finally started entering the cryptocurrency bubble. The initial prices were indeed low and it stayed below $0.0003 until March. This was the time when an unexpected soaring in the prices occurred and DOGE crossed the $0.0004 benchmark. The investors purchased the coins and the capitalization of the coins rose steadily. The value of the coin dramatically increased in the spring of 2017 and by the end of 2017, the prices were at $0.008.

Many altcoins started to decline in price at the beginning of 2018. Dogecoin was no different. From being at $0.015 on January 8th to falling down to $0.002 by the end of June. It was drastic and the change was dynamic but Digecoin recovered quickly and was recorded as $0.0063 on 11th September. But, the rise was not permanent and Doge went back to $0.002 by the end of the year.

The Altcoin traded on a low price for most of the year during 2019. Dogecoin maintained its consistency of price ($0.002) from the dawn of January to the end of April. A sudden hike was witnessed in May when the prices surged up to $0.0033 and then further dropped back to $0.002 and remained the same throughout the year. The prices were not volatile enough and remained under a certain limit. At the end of December 2019, Dogecoin was trading at $0.0020.

2021 was the year of Dogecoin. This altcoin saw a major outburst in the price. And from $0.004, it went all the way up to $0.7376 on May 8, 2022. The MEME season was at peak, and Dogecoin became one of the best cryptocurrencies to give massive returns in 2021. Elon Musk tweeted a lot about Dogecoin that added to the popularity. But since then Dogecoin has been on a falling spree, and by the end of Dec 2021, Doge was priced at $0.171.

Maximum price prediction of Dogecoin in December 2022 is 0.213 USD.

Dogecoin Price Prediction for next year, 2023

Dogecoin Price Forecast for Today, Tomorrow and This Month

Will Dogecoin Price ever reach $10?

The Crypto analysts are BULLISH on Dogecoin long term, and predicts it could hit $22.2 in the next five years. The Elon Musk effect also seems to be one of the potential reason why people will be bullish for DOGE.

Dogecoin is not just the hype. Also in 2022, we have seen the price have corrected by a lot. Though we expect the downtrend to continue, but long run, it could give good profits. It is however not advisable to invest huge amounts in any altcoin.

Why is Dogecoin so cheap ?

Doge is cheap because the total number of coins in circulation is extremely high. Also, Doge has no real life value, its prices are based on the hype it gets.

Is Dogecoin a dead coin ?

No, it would be untrue to say that DOGE is a dead coin. There is an active community and development is also taking place at a greater speed.

Is Dogecoin Worth Investing in 2022 (Updated)?

Dogecoin is a not just a MEME cryptocurrency and is now one of the most popular cryptocurrencies of the world. Though DOGE is no exception when it comes to risk but its recent correction has made it a peak interest for potential investors. But, for a highly volatile and inflationary asset like Dogecoin, it is difficult to make an investment decision. Even though Dogecoin has recently proved that it is capable of attaining higher prices and is a profitable investment, it is still not a wise idea to put all your money in Doge. Doge could correct by another 50 percent from today’s prices, and that should be a good entry point in Doge. The coin is also often backed up by big Crypto advocates in the market including the CEO of Tesla.

But, the fact that Dogecoin is an unstable coin cannot be ignored. The increasing number of circulation will decrease the demand, which will further lead to decrease in prices of DOGE. This is certainly not a good sign of a healthy investment. The coin is highly unpredictable, inflationary and certainly not a useful crypto. You can check both floating and fixed rate for exchanging Doge on SimpleSwap, for example.

Our take on the coin is that it is good only for short term investments. Even for long term, do not risk more than 2 percent of your portfolio in Dogecoin. Don’t forget that it is a highly risky coin, you could end up losing all your money. So, Elon Musk might influence your investment decision but he will certainly not pay your bills. Always DYOR before investing.

Now that you have read our updated article on what is Doge and Dogecoin Price prediction for 2022 to 2025, what do you think Doge coin will reach by 2030? Share with us under comments.