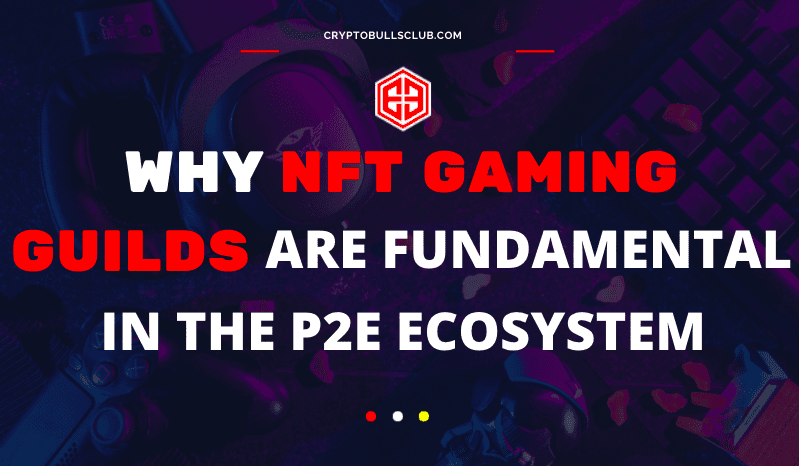 Competitive gaming has become an international sport, with some people making a career out of it. According to the latest statistics, the esports gaming industry is currently valued at $1.08 billion and expected to hit $1.62 billion by 2024. More interestingly, the emergence of gaming guilds has created an opportunity for players to form alliances and compete against other ‘clans’, regardless of their geolocation.

Dating back to the early 80s, gaming guilds have played a significant role in the advancement of competitive gaming. Today, it is common to find online gaming communities whose sole purpose is to combine forces to complete a particular ‘mission’. These guilds span across most of the existing esports and video game ecosystems; some notable mentions of traditional gaming guilds include Team Liquid, Cloud 9 and FaZe Clan.

With the debut of the play-to-earn (p2e) model, gaming guilds are again rising to fame. Innovators in the Non-fungible token (NFT) community are coming up with gaming clans whose goal is to facilitate p2e gamers with the right resources. In doing so, these crypto gaming guilds are creating an opportunity for both small-time and deep-pocketed gamers to experience the perks of the burgeoning p2e ecosystem.

NFTs took the word of the year in 2021 according to Collins dictionary; there was a massive hype after Beeple’s ‘Everydays: The First 5000 Days’ NFT collection sold for $69 million at a Christie’s auction. That said, the highlight of the year was the Axie Infinity play-to-earn game which recently set a record high of $4 billion in total sales. Developed by Sky Mavis, Axie Infinity is now a source of livelihood for some players in countries such as the Philippines.

But how accessible are play-to-earn games? Over time, the cost of playing games such as Axie Infinity has gone up hence locking out some interested gamers. This is where NFT gaming guilds such as Yield Guild Games (YGG) come in; YGG was among the pioneer NFT guilds to launch. It has since raised over $22.4 million in funding and supports several NFT gaming environments, including the Ignite Tournaments esports DApp.

Commenting on this integration, Ignite Tournaments CEO and Co-founder Krystal Young previously emphasized on the potential of the play-to-earn model and crypto gaming guilds,

We are extremely excited to have YGG on board as our lead investor, advisor, and partner. Together with YGG, Ignite Tournaments will revolutionize the future of mobile gaming with play-to-earn for mobile gamers around the world.

It is also noteworthy that crypto VCs have been investing quite a fortune in the NFT gaming guild space. According to a report by Coindesk, big names such as Pantera Capital, DeFiance Capital and Andreessen Horowitz (a16z) are some of the heavyweight players that have allocated a significant amount of capital.

Looking Into the Horizon

The future of the play-to-earn economy is bright; as it stands, the total blockchain gaming market cap is well over $13 billion. With the launch of the metaverse, it is likely that this ecosystem will grow bigger, not to mention the increasing interest by big tech companies such as Microsoft and Meta.

“Our hope is that within the next decade, the metaverse will reach a billion people, host hundreds of billions of dollars of digital commerce, and support jobs for millions of creators and developers,” noted Zuckerberg in Meta’s 2021 Founder’s letter.