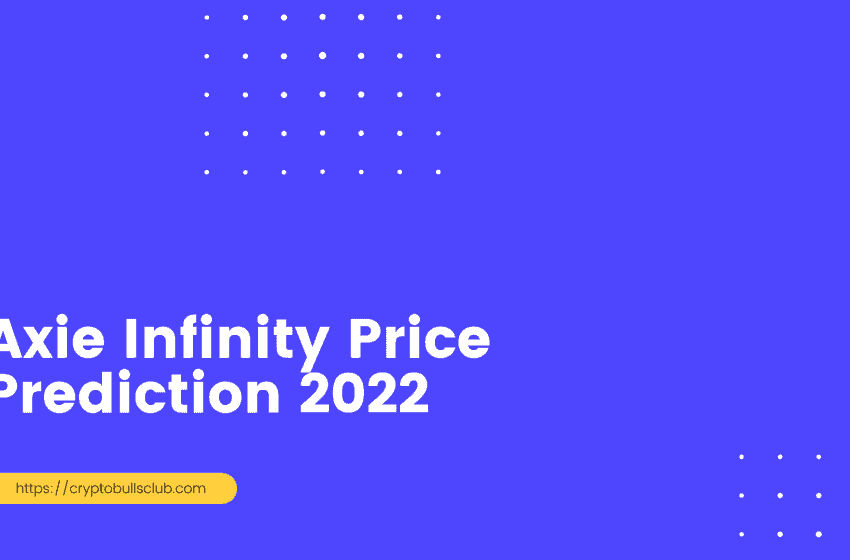 The public’s awareness of cryptocurrencies has gradually grown and gained ground. However, a large number of them fall short over time and will continue to do so as long as there is widespread adoption. This is now achievable for a breakthrough asset that puts the spotlight on what the people want most: fun.

Axie Infinity: What Is It?

More than 1 million people actively play Axie Infinity every day, making it the most well-liked blockchain-powered game to date. In order to receive daily rewards, players can gather, breed, and battle Axies. In line with Pokemon, there are nine different classes of Axies, and each class has a distinct edge in combat. Each Axie is unique despite being members of the same species. Each of the three genes—dominant, recessive, and minor recessive—is present in one of the six bodily components that axes have. Depending on the Axie’s class and the player’s preferred fighting build, each Axie can be bred a maximum of seven times, with some traits being more potent than others. The most likely genes in the progeny of their NFT can be found using the Axie Breeding Calculator.

In the player vs. player arena mode of the game, as well as in the player vs. environment adventure mode, three Axies are required for combat. Tokens for Smooth Love Potion will be awarded to players for winning. Breeding new Axies requires SLP as well as AXS, the game’s native coin. Axie Infinity rewards players for their successes and successful completion of daily objectives with SLP tokens, adhering to the fundamentals of play-to-earn gaming. Because SLP may be converted to fiat currency and other cryptocurrencies via cryptocurrency exchanges, this incentive scheme is distinctive. Additionally, through the Axie Infinity Marketplace, axes can be exchanged for Ethereum and sold as NFTs.

Axies, which are ERC-721 tokens, and its two cryptos, SLP and AXS, are ERC-20 tokens. Together, these three token types served as the basis for Axie Infinity’s initial core technology. Since then, Sky Mavis has created Ronin, a sidechain with permissions that works with Ethereum and was created to house the game. Starting in April 2021, Axie Infinity will move to Ronin. The in-game collectibles, axes, pieces of land, and every other item are NFTs that provide safe, censorship-resistant proof of ownership. Being able to always be sold in the game’s marketplace contributes to their value retention. For winning in-game battles, players are awarded SLP tokens. You could say that this game is the first one where in-game collectibles are actually held by the players. Opening a Ronin wallet and linking it to their accounts is required for players who want to make purchases from the marketplace. Windows, Android, Mac, and iOS users can all play the game.

What makes it unique?

The use of blockchain technology by Axie Infinity to advance gaming in Web 3.0 is one of its most distinctive features. Even though there have been prior attempts, this is the first game to successfully draw in a healthy, global gaming community. Theoretically, participants in regular play can generate a sizable revenue. For winning in-game battles, players are awarded SLP tokens. You could say that this game is the first one where in-game collectibles are actually held by the players. Compared to popular MMOs like World of Warcraft, where artificial gold with no real-world value is used as the in-game cash, this is a stark difference. There is no trading, selling, or character transfer available for items or rewards that players gain.

If game company Blizzard decides to ban a player’s account, they risk losing all their possessions and achievements, unlike in Axiom Infinity where these resources are the player’s property. Players aren’t the only ones who prize Axies; investors do too. Because of their scarcity, the mystic axes are valuable, and as more players join, their value will probably rise. The fact that Axie Infinity is working toward decentralization is another positive feature of the company. Along with slowly transitioning to a DAO, the company is also developing Lunacia SDK, a map editor that enables users to design game types and other encounters and save them as NFTs. The goal of the Lunacia SDK is to gradually decentralize the game development process. A detailed roadmap of Axie Infinity’s objectives has been made available. All significant previous and upcoming milestones are included in the roadmap, which provides information about how the project is progressing.

What exactly is an AXS token?

The native token for Axie Infinity’s governance is called Axis Infinity Shard (AXS). As of right now, breeding fees can be paid with AXS. The game’s future evolution will be decided by AXS holders, who will also be able to wager their AXS tokens to obtain incentives within the game. Axie Infinity intends to gradually transform into a decentralized autonomous organization (DAO) in order to support community governance.

During the first week of November 2020, Axie Infinity began trading on the Binance Launchpad and was officially launched. AXS’s price increased again after falling below $0.10, rising all the way to $0.46 by the end of November. It’s a shame that this rise was short-lived. The highest AXS price ever was $0.90 in December. AXS pricing continued to decline, reaching $0.54 at the end of 2020. Even though the price of AXS had dropped, since Axie Infinity had first introduced the token, it had increased by 200 percent.

The cost of AXS decreased once again to $0.41 in the first half of January 2021. The AXS increased to a value of $0.81 at the conclusion of the month. Axie Infinity’s price significantly increased in February to $2.38 before dropping back to $1.40 in late February. At the conclusion of the month of March, it surpassed $6 for the first time ever. At the end of April, it reached a new high as it passed the $10 threshold. Then, it went on a protracted bullish run before reaching a new all-time high of $157 on November 6. Then, prices started to drop, and it closed the year at $93 instead.

By the end of January, it had dropped to $47 from the beginning of the year’s bear market in pricing. It increased to $68 during the first week of February before declining once more. Then, as a result of the market’s sharp decline, the price of the stock dropped to roughly $15. $14.26 is the cost right now.

Prediction for the September 2022 price of Axie Infinity

How to buy Axie Infinity?

It is possible to anticipate, based on the statistics, that investing in Axie Infinity over the long term will be profitable. Long-term is defined as the Axie Infinity price estimate for a time frame of five years or more.

What is the anticipated price of the Axie Infinity coin in 2023?

What will AXIE Infinity be worth in 2030?

When will AXS touch 100USD?

Is AXS a Scam?

Some investors say AXS is a scam as the price have dropped and does not seem to go up. Well, the price may have gone down by a huge margin, but that does make AXS a scam token. Axie infinity is one of the best play to earn games out there. However, some experts do say the token model of AXS is flawed and is designed to go down with time, and is a PONZI. However, that is not true, according to us. AXS tried something new, and should stay the market leader in the world of play to earn blockchain games.

The inclusion of gameplay centred around the game’s land NFTs, which let players modify the landscape and create shareable experiences, is the next item on the game’s extensive roadmap. Axie Infinity will be able to do more than just fight and create monsters thanks to this additional feature. Along with the general release of Axie Infinity on iOS and Android smartphones, further enhancements planned for 2022 include the extension of the AXS ecosystem to incorporate governance and broader play-to-earn prizes.