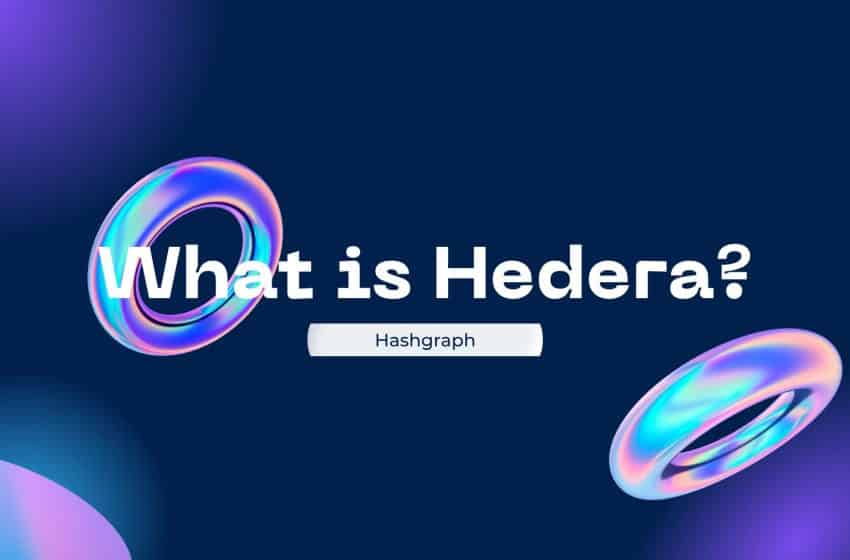 What is Hedera? Hedera is a brand-new cryptocurrency that has the potential to fundamentally alter how we think about blockchain technology. There are several blockchains used in cryptocurrency-related enterprises, however, they are not all created equal. Hedera has its own cryptocurrency, which isn’t quite a blockchain. However, it’s something you may have heard about or will hear about shortly. In any case, it’s worthwhile to learn more about it.

What exactly is Hedera?

Hedera can be defined as a network for the public with a cryptocurrency of its own. It does not, however, make use of a blockchain.  Non-fungible tokens are also accepted, although no smart contracts are used. It’s decentralized, just like the Bitcoin is, but it does have a governing body, which, like Ethereum, is open to the public. Hedera aims to be more safe and scalable than competing alternatives while also being faster, more efficient in terms of energy, and less expensive. Google, IBM, and LG are just a few of the firms that own and run Hedera. It promotes itself as a public ledger that is third-generation, claiming to improve on prior systems’ concepts and technologies while also introducing new capabilities.

It employs a Hashgraph as a consensus algorithm and that Hashgraph is a distributed ledger that maintains track of transactions between network nodes that are timestamped. Although this sounds exactly like blockchain, there are some unique differences. Transactions in the  system of Hashgraph are contextualized on the basis of their location and order in relation to previous transactions. When opposed to a blockchain, where payments are contextualized on the basis of their location on the blockchain. That is, without any regard of the amount of traffic on the blockchain or using cryptocurrency, the blockchain must remain in continual production. Instead of being distributed to every node on the network, these payments are only delivered to active nodes on the Hashgraph for confirmation.

This results in a network that is more scalable. It does, however, save time and energy. POS (Proof-of-stake) is used to prioritize transactions. In other words, what percentage of the HBAR cryptocurrency does each user hold? The Hashgraph, like many crypto protocols, allows transactions to be done using the protocol’s native coin. Some cryptocurrencies, such as Bitcoin, have no need for the protocol. Projects related with crypto can be used to trace everything related to a digital identity. You must know this if you follow NFTs up close. By adding these digital IDs to actual goods, Avery Denison, a material science business, has created a linked goods cloud using the Hedera Hashgraph. Being able to track them through supply chains.

For non-fungible tokens Hedera can be used. The Hashgraph powers a carbon-neutral NFT platform, the ARIA Marketplace operated by the ARIA system, which is supported in part by IBM. Hedera’s Hashgraph is used by ServiceNow in its cloud architecture, which supports the company’s electronic services. Hashgraph is used by ServiceNow to track correspondence between organisations that may be fierce competitors with one another., rather than keeping physical goods like Avery Denison or digital items like the ARIA network.

While Hedera does not use smart contracts, smart contract solutions such as Chainlink can be used to extend the platform’s functionality. HBAR, Hedera’s native cryptocurrency, can be purchased with a Hedera profile or from a variety of alternative exchanges and wallets. On the other hand, the majority of those who profit from the hashgraph are unlikely to engage with HBAR directly. Because of services of tokenization by Hedera, many Hedera-based applications can utilize their own tokens, such as utility tokens and non-fungible tokens, that are never traded in the same way that normal cryptocurrencies are.

The Hedera ruling council controls all nodes in Hedera, thus you can’t mine there. Members that don’t belong to the council will be permitted to operate nodes after the council reaches 39 members, and they will be paid for their efforts with HBAR in the same way that other cryptocurrencies are awarded for mining.

It’s decentralized in the sense that it’s not run by a single person. Hedera’s objective is for it to be totally managed by the users, which is Hedera’s long-term goal.

You may wonder if the Hedera hashgraph can be staked. Yes, you are able to do so. You can stake HBAR purchases on trading platforms to enhance the load of your payments on the hashgraph, even though you can’t mine Hedera right now.

Hashgraph is a new consensus system that aims to handle transactions more quickly than current networks. On top of hashgraph Hedera’s consensus algorithm, Hedera layers proof-of-stake for consensus waiting, a fee and incentives structure, a cryptocurrency, and the two key HCS and HTS services. Hedera aspires to be a platform that can manage large volume Usecases such as Micropayments, Data Integrity, and Tokenization since hashgraph has the potential to process transactions at a fairly efficient rate. The network also has a virtual machine, similar to the EVM, that can compile smart contracts written in Solidity. Hedera aims to be compliant in all jurisdictions by providing native support for optional KYC and AML checks through its verified identity method.

Is Hedera going to be a rival to Ethereum?

Hedera is much more than that, and the project is continually changing and growing. However, if you keep following Hedera, you’ll have enough information and comprehension to get started. It’s unclear whether Hedera and its hashgraph will be capable of competing with Ethereum directly. The technology that is scalable, on the other hand, is outstanding and provides for a far quicker transaction rate than the  blockchain of Ethereum currently permits. All of this could change when Ethereum 2.0 is released in 2022. Ethereum will transition from POW (proof-of-work) to POS (proof-of-stake). The measure is intended to boost Ethereum’s transaction capacity while also cutting gas fees. Hedera hashgraph strives for the maximum level of protection feasible.

Through a technique known as aBFT  (Asynchronous byzantine fault tolerance), even when malevolent hackers are there on the network, the network can be protected. Hedera hashgraph is very fast than Bitcoin and blockchains of Ethereum because payments may be executed in parallel rather than serially, and it has a fast latency. A transaction is sent out in a matter of seconds and is confirmed by the network with 100% certainty. The Hedera hashgraph technology is compatible with Ethereum’s Solidity  programming language that focuses on objects, which is widely utilized for smart contracts. By allowing smart contracts to function, the platform may be used to create decentralized applications (d apps), which can be utilized for a number of purposes such as gaming, decentralized finance products, and digital identification, among others.

It also has very low fees and fast transactions. Transactions reach absolute finality in seconds, and transaction fees are under a cent. Bitcoin transactions, on the other hand, can take up to 10 minutes to confirm and have a transaction charge of more than $1 for much of 2020. Early in 2021, this increased to more than $10 per transaction, going as high as $30. Despite its many benefits, Hedera hashgraph is not open source, unlike many other cryptocurrencies. The Hedera hashgraph is trademarked, making it impossible for developers to fork the protocol and build their own public variants, similar to how Bitcoin Btc forked into Bitcoin cash, and Bitcoin cash forked into Bitcoin Sv.

The platform’s creators, Swirlds, claim that the technique is designed to prevent the loss of network effects, which cause the hashgraph’s value to rise as the number of users increases. Because forks can separate user bases and communities, corporations developing unforkable chains face a risk, which Hedera has addressed with the help of its patents. Furthermore, with only 19 governors, Hedera hashgraph may not be able to deliver the decentralised solution that blockchain purists require. However, because each governor represents an industry-leading, highly respectable organization, it is doubtful that they would act in any way that is not in the best interests of a network in which they have a significant stake.

Only the governing members will be able to run nodes when Hedera launches under a permissioned paradigm. As the network’s native token, HBAR, becomes more widely distributed, node membership will shift from permissioned to permissionless, allowing any network participant to run a Hedera consensus node.

Is Hedera Hashgraph worth buying?

Indeed, Hedera Hashgraph is an excellent investment, according to price estimates. Many crypto experts are hopeful regarding the future price of the Hedera coin because it is a leading participant in the cryptocurrency sector that has grown at such a rapid rate. Before investing in tokens, investors are recommended to conduct proper research.

How do I deposit an HBAR?

When you activate the dropdown menu on any trading platform, you’ll be able to access your profile. When you click Deposit, you will be sent to the deposit page. You can choose whatever coin you want to deposit once you’ve arrived at the deposit page. The HBAR pricing allows more than 150 cryptocurrencies to be deposited in the cryptocurrency market.

Where and how to trade Hedera Hashgraph?

There’s a description of the exchanges available to you, as well as a buying guide to assist you. Trading systems track Bitcoin and Ethereum rates on all major fiat exchanges and combine them with current HBAR rates from exchanges to make transactions as simple as possible. Each exchange’s official web socket is used to obtain rates. Binance, OKEx, Huobi Global, and FTX are among the cryptocurrency exchanges where HBAR trades.

Where are HBAR tokens stored?

Both hardware and software wallets can be used to store HBAR. There are only a few mobile wallets that support HBAR storage.

What is the all time high price of HBAR?

The price of Hedera Hashgraph has reached an all-time high of $0.505224. Hbar’s current price projection for 2022 is $0.44. Even so, price fluctuations are unpredictable.

Should you invest in HBar and why?

The price of the Hedera Hashgraph cryptocurrency appears to have a bright future. HBAR can be burned in a step procedure in order to maintain market stability and minimize market volatility. The HBAR model is designed in such a way that this model does not support smart contracts and instead the model relies on the consensus mechanism that is called Byzantine-fault-tolerant, which uses a number of nodes such as Accelerator nodes, Validator nodes, as well as various types of nodes to help with transactions, authentication, and verification procedures at different phases.HBAR establishes a faultless opportunistic framework in which other digital tokens can also be traded. The HBAR platform, cryptocurrency, and mobile phone app all accept a number of debit and credit cards. As a result, Hedera Hashgraph can be said to be perfect for the development of decentralized applications around the world, with characteristics like controlled mutability and time-based file expiry.

Hedera was founded in 2018 and has had a strong team of devoted individuals with extensive experience in the crypto space. The HBAR coin had a wonderfully successful year in 2019. Despite the fact that the coin slowed in the third quarter of the year due to high volatility, it received a lot of momentum because of the IEO that the company introduced, achieving gains of almost 150 percent by the end of the year.

How it went on a decreasing price change pattern is entirely due to COVID-19, which first arrived at the start of the year 2020 and remained downward for a period of time before reappearing to claim supremacy and never looking back since.