Never Underestimate The Importance Of Community In Play-to-earn Gaming 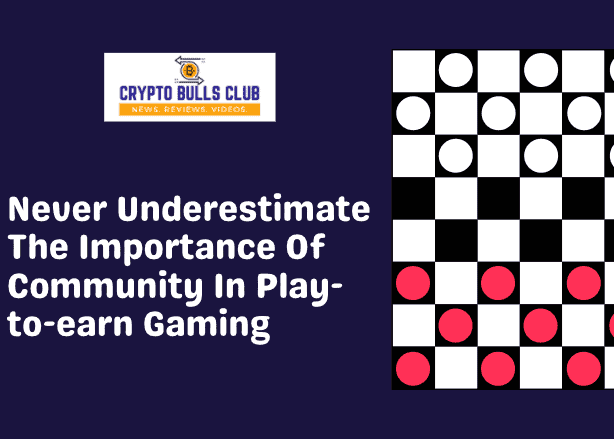 Many people openly wonder what makes specific cryptocurrencies more successful than others. Putting on a marketing campaign to spark temporary excitement is easy, but long-term plans require a radically different approach. Without a strong community, projects will not survive for long, especially where play-to-earn gaming is concerned.

Whenever a new project comes up, there will always be initial curiosity and excitement. People are always looking for the next big thing in the industry. Some projects will have an easier time retaining users than others, depending on their overall utility, long-term vision, and viability. A one-trick pony will have a tough time staying relevant, a trend that becomes especially apparent in play-to-earn gaming.

Despite being one of the more exciting industries in cryptocurrency and blockchain, play-to-earn gaming has a long way to go. Gaining initial traction is often relatively easy, but ensuring players come back for more is a different story. Unfortunately, many games struggle in this department. The lack of innovation and reasons for users to continue to participate is a big problem that needs to be addressed.

Video games – blockchain-based or otherwise – need a community of players to succeed. When players give up or move on to something else, the game becomes far less appealing. Blockchain games embracing the play-to-earn model hold tremendous potential. Giving users the option to make money by playing games is a powerful incentive.

However, if the community doesn’t care about the game’s long-term success, things will fall apart soon. Rewards earned through play-to-earn gaming are native tokens and NFTs, which can be sold and traded freely. Users who do not care about the long-term game are inclined to sell rewards quickly and create market pressure. If there isn’t enough communities to increase their exposure to the tokens and NFTs, the price will collapse, and the incentive to keep playing will keep decreasing.

The Power Of A Dedicated Community

One example of a passionate community in the crypto world is Dogecoin. The currency was developed as a meme currency with no utility or purpose. However, its community members made Dogecoin a household name through various initiatives, sponsorships, charitable events, and more. One can argue Dogecoin was perhaps the first currency to be left in the hands of its community since Bitcoin, and the supporters made the most of it.

Growing a dedicated fan base is more difficult than one may think. Developers need to deliver on initial promises and push the pace of development to ensure people remain engaged. It creates a rippling effect that triggers enthusiasm and brings more people into the fold when that happens.

Many Thanks to you friend, for giving early exposure to such 🎮 opportunity. Credible Crypto on Twitter
pic.twitter.com/I4FzDpEq0E

Building a strong community – in P2E gaming and otherwise – is a two-way street. Community members will support the project if the developers remain committed and have a long-term vision. One project noting such strong two-way momentum is Bullieverse, even though the project noted a slow start for many months. When the ball eventually got rolling, one milestone after the next got checked off, and promises were delivered upon.

Developing a full-fledged game is a time-consuming process. However, it remains crucial to engage the community every step of the way. Enabling asset holders to gain early access to a game in development is a solid approach. In addition, community members can provide feedback on certain aspects and features, even if the game isn’t necessarily complete.

Moreover, it remains pertinent for play-to-earn game developers to empower the players. Utilizing NFTs and in-game rewards is only the first step. Governance remains a crucial differentiator between blockchain games and traditional projects. Like Bullieverse aims to do, establishing an Open Metaverse requires the community to own and govern everything under this banner.

An open, transparent, and decentralized era of gaming dawns upon the industry. Involving the community must be the top priority for all developers, as a different approach will not succeed in the long run.

In the current stage, play-to-earn gaming is mainly about rewards above anything else. Therefore, it is understandable that players want to make money by playing a game, although that is a narrow vision. Ultimately, these projects stand or fall based on community development and engagement, something most projects still lack today. Whichever play-to-earn game can become the proverbial “Dogecoin of decentralized gaming” will have a competitive edge in the industry.