Cryowar, the budding blockchain gaming project plans on bringing in next-generation GameFi by combining the best of NFTs, DeFi, and high-level gaming technology.

This gaming platform is trying to use cutting-edge gaming technology combined with DeFi to give a riveting gaming experience to the users with attractive visuals. It is a sci-fi game with real-time multiplayer PVPVP where users can collect and trade in-game elements for value. Cryowar runs on Solana which is one of the most secure and fastest blockchain networks. The immense graphics are provided by The Unreal Engine and AAA Graphics.

The Cryowar team has been developing this GameFi for more than three years. This team has been dedicatedly working on this next-gen project to lay out the groundwork for the gaming future.

P2E is the basics of this gaming platform. P2E is one of the hottest platforms in blockchain gaming right now. P2E is also one of the newest concepts in gaming which was introduced with the help of NFT and Blockchain. While there is a huge demand for in-game assets like tokens and NFTs, here users can own legitimate in-game purchases and even transfer them between games. Players can even keep their earned NFTs, and later as their value rises in the NFT Marketplace, they can sell them on Solana-powered marketplaces.

Learn about Nakamoto Games, one of the most hyped P2E games here!

Very conveniently Cryowar has limited the combat gameplay timing to 3 minutes. This enables players to play at their convenience wherever they are and whenever they want. Since the visuals are provided by AAA Graphics, this cut-edge gaming technology provides an immense video gaming experience.

First Look into the game!

The first look into the Cryowar website is enough to give you an insight into the cutting-edge graphics and visuals used in the development of this P2E Game.

You’ll get a brief introduction to the game modes which explains the rules of the game. You’ll have to go through various level objectives before every match. This P2E game lets you fight against friends and enemies across an immersive array of battle modes and maps, that are engaging enough to keep you at the edge of your seat. 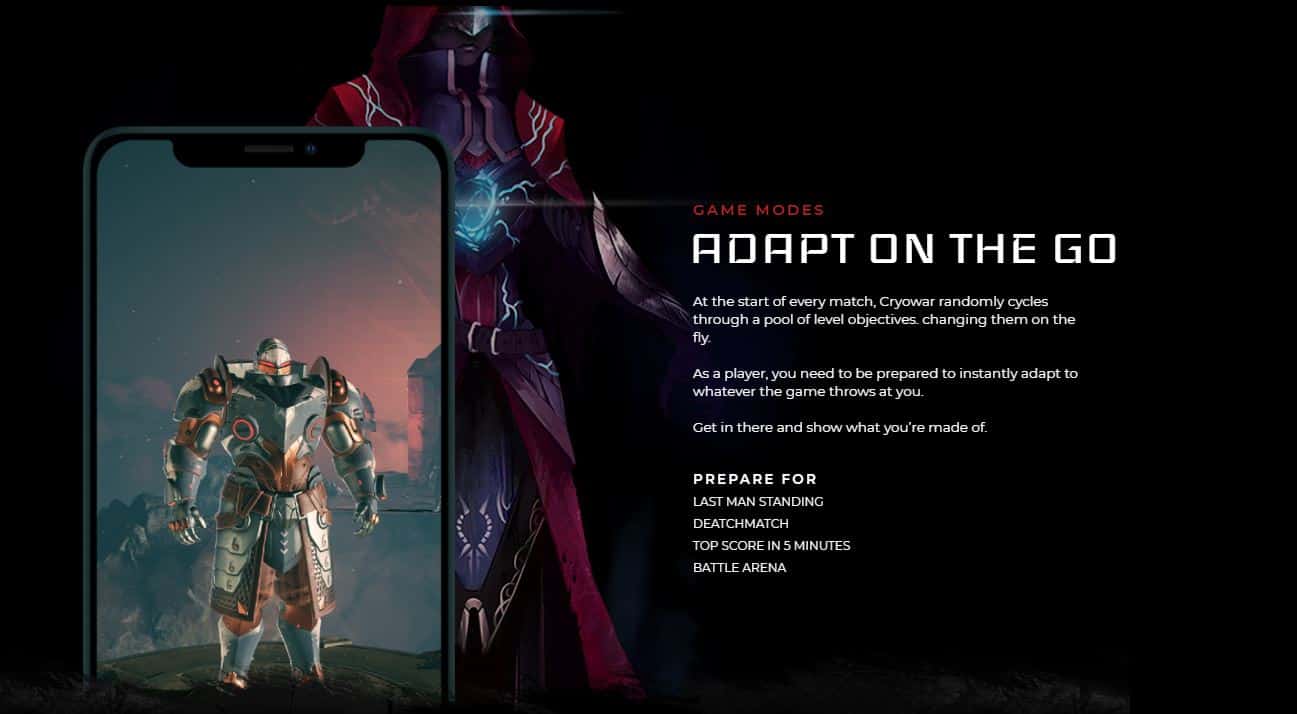 You’ll be given a choice of heroes to pair them, customize their powers and play your way. You’ll get to meet the battlefield heroes, their powers, playstyle, and their characteristics. Here’s one of the characters named after the mythical fighters Valkyrie.

Here’s a short summary of the Cryowar Ecosystem Tokenomics:

What can you do with $CWAR Tokens?

With these $CWAR Tokens, you get access to in-game DeFi Staking, Yield Farming, Exchange Trade Utility, and Governance Voting. NFT Staking will win the token holders randomized rewards on a monthly basis which includes NFTs, $CWAR Tokens, Arena and Tournament Tickets, etc. Token holders will be able to provide liquidity, receive extra tokens, or stake the tokens for rewards.

Cryowar plans on introducing DAO Governance and provide additional rewards for the community to help the project reach new heights. There will also be a 30% token burn, hence investing in $CWAR now might give you more value in the future.

Meet the Team and the Partners behind Cryowar

Nikolai Petrovich (CEO) and Allesandro Ciavola (COD) have experience in Game Designing and have brought this game with cutting-edge visuals into the DeFi-DAO Metaverse.

Cryowar is backed up by notable partners like Amazon, CocaCola, SAP, Atos, Adobe, MySQL, and WAX.

A GameFi like Cryowar is very much required for the future of Blockchain Gaming. With more than 3 years of developing this game, Cryowar has seamlessly brought together DeFi, NFT, and Blockchain Gaming. GameFi is slowly taking over the Crypto world, and by combining these elements Cryowar is taking a big step towards the next-gen gaming experience. While gamers are shifting from conventional gaming to P2E, Cryowar is here is stay for the long run!