10 BEST CRYPTOCURRENCIES TO BUY IN NOVEMBER 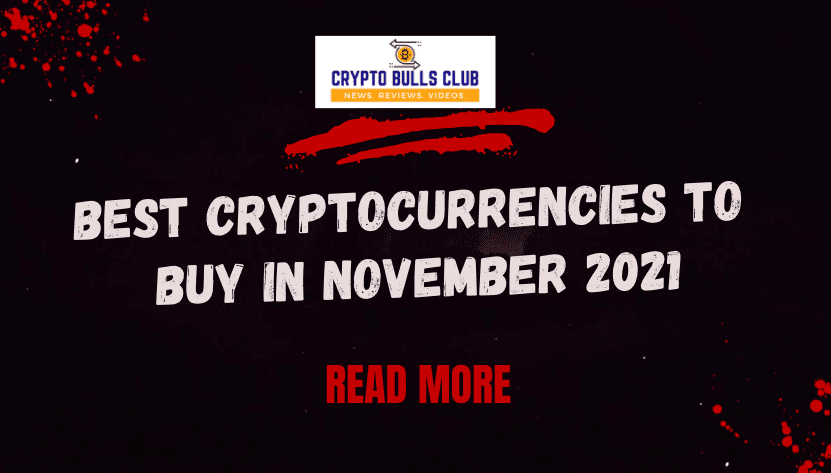 November 2021 is expected to be a bullish month for the cryptocurrency holders and in this article we have mentioned which are the top cryptocurrencies you should be holding in this month. Investing in cryptocurrency carries a high degree of risk, but the rewards could be enormous. To start off November, the price of Bitcoin is rising, providing support to the recovering crypto market, which saw several record levels among the most prominent digital currencies. For the first time in its history, Ethereum’s price has risen above $4,450 due to an increase in the number of people using its blockchain network. Polkadot also increased by over 18%. In the very last two months of 2021, some crypto analysts predict that even more records will be broken. Read more to know which cryptocurrencies you should be considering right now to invest in.

10 Best Cryptocurrencies To Buy In November 2021

To list the names of the best cryptocurrencies to buy in November:

Top Cryptocurrencies to buy in November 2021 (in Detail)

These cryptocurrencies should be there in your portfolio for the month of November.

On October 20, 2021, Bitcoin, the world’s first and most popular cryptocurrency, hit a new all-time high of $66,974 and has gained 4.14 percent in the last seven days. Bitcoin’s acceptance and use are increasing at an exponential rate. Bitcoin is now accepted as a payment method by Microsoft, Paypal, and many other companies. The US Securities and Exchange Commission recently approved a futures-settled Bitcoin ETF, and more Bitcoin ETFs are expected to follow, facilitating institutional demand and flooding the market with billions of dollars. When these increases in demand are combined with Bitcoin’s limited supply, the price will only rise, indicating that BTC has an enormous and promising long-term potential.

The price of Ethereum has recently risen over 5% and exceeded $4,500 over the US dollar. ETH has reached a new all-time high, and it is expected to rise to $5,000 in the near future. It’s a fantastic platform for developing decentralized applications and tokens. It also has the most users, with 3-4 times the number of transactions and daily active addresses as Bitcoin. In the short term, a break above the next major resistance level could push the cost above $4,720. Any further gains could push the price up to $5,000. Prices are expected to rise as a result of rising demand and slowing supply.

One of the most popular blockchain-based metaverses is the Sandbox. SAND, the company’s utility token, is used to purchase in-app NFTs and pieces of land. Sandbox is set to start a few games in its virtual world in the near future, causing SAND token demand to skyrocket. Since its introduction to the market, the coin has attracted a lot of attention from investors all over the world, with many of them investing large sums of money in it. According to a recent prediction, the price of the coin could reach around $5 USD by the end of 2021. During the current crypto market cycle, SAND is unquestionably a good investment. 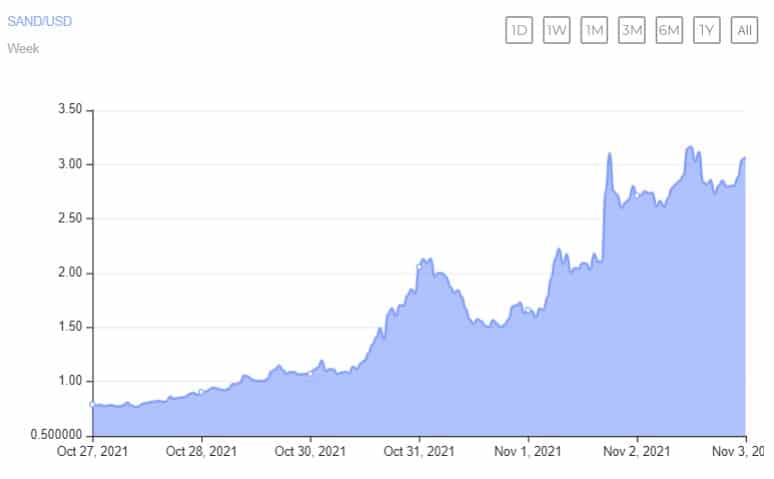 Mana is the virtual token of Decentraland, a metaverse platform where consumers can purchase and sell digital assets. It was launched in 2017. The land is acquired using NFTs, which are a type of electronic asset used to record the ownership of items. It is based on Ethereum, the second-largest digital currency in the world. The value of mana reached an all-time high of $4.16, up 400 percent from where it was trading fairly soon after Facebook announced its rebranding to Meta, with the goal of focusing the troubled social media company’s attention on the metaverse, a type of virtual platform where people can connect with each other and digital items.

The blockchain-powered next-generation gaming metaverse, Star Atlas, is built on the two tokens of Star Atlas. The main token is ATLAS, which is a standard in-game currency. Players can earn a token by performing a variety of tasks, or selling their assets. Just about everything in this metaverse is an NFT. In the last seven days, the value of ATLAS has increased by 75.27 percent. The current ATLAS price is $0.163169. Star Atlas is currently trading 41.73 percent below its all-time high of $0.28, but it has the potential to rise in the near future.

Bloktopia is one of the best Metaverse projects that launched in 2021. Although the project has given returns over 400x for the IDO participants, we still feel there is a long way to go. BLOK is one of the Biance contenders, and is currently trading at 0.09 USD. The current marketcap is 606,986,888 USD.

Polkadot’s price has increased by more than $15 since the beginning of October, and it has a high likelihood of increasing in value as a result of a series of events that could result in an excellent rally in Polkadot. Polkadot recently announced that its first parachain bidding would take place in November, so it’s obvious that we should keep checking on its current valuations. You can learn about Parachains and Crowdloans here. Analysts say we could see some new all-time highs before 2021 if Dot can break through a strong resistance level at market levels.

This cryptocurrency is community-owned and influenced by Floki, the Shiba Inu of Tesla, and SpaceX CEO – Elon Musk, who has been seen pushing forward the project since March of 2021. The 275% price jump in its valuation is due to an advertising campaign on London’s bus transport. Floki has risen 1,200 percent in the last two and a half months. The trading volume of Floki Inu is now just over $16 million. On October 18, the value of Floki went up by 24 percent in just 24 hours, making it a good cryptocurrency to invest in.

Gitcoin is a cryptocurrency project that is particularly created to assist in the advancement of the ecosystem as a whole and the development of the future of the open internet. As newer members connected with the project and its main objective of improving the Web3 infrastructure, the price of GTC soared 103 percent from a negligible of $4.78 on July 20 to a high of $9.71 on August 11 this year. GTC’s recent strength can be attributed to three factors: its growing list of associates, features from the DAO governance that enables the community to control the platform, and more than sufficient funding that can be used to develop programs and improve guidelines.

$GTC Golden cross on the 4h chart #gitcoin it’s so bullish whale’s will enter when we don’t expect. pic.twitter.com/4AQYWJhupS

Project SEED is a gaming environment that aims to be at the forefront of widespread blockchain adoption. Project SEED recently closed a $3.1 million private funding round, receiving capital from many partners that is 33 times greater than the initial goal. Around 40 top venture capital firms and associates in the crypto market took part in this funding initiative. Project SEED’s upcoming Initial Dex Offering, which will be launched on Solana and BSC at 12 p.m. UTC on November 9, 2021, is a great way to invest in cryptocurrencies.

With cryptocurrencies, there is always a risk because they are not always predictable. If you’re thinking about investing in one of these cryptocurrencies, it’s always a good idea to seek advice from someone who knows what they’re talking about. While crypto trading is trendy now and could potentially pay off handsomely, it’s important to remember that crypto can be an uncertain and volatile investment. The industry is still in its early stages of development. If you’re going to invest in something new, you need to be prepared for different changes in the market.

Which are the cryptocurrencies you think would give great returns this month? Share with us under comments