This week, Big Time Studios is getting bigger with marvelous funding of $21 million to bring NFTs to the gaming economy. Ari Meilich, the co-founder of Decentraland, now teamed up with the gaming industry to launch the new RPG gaming experience.

The prime mission of this tuning up is to bring the blockchain-based games in front of the mass audience, and today they came with a surprising announcement of collaboration and raising funds to $21 million.

And everyone from Sam Bankman to Ashton Kutcher is involved in raising these funds.

Also Read: What are NFTs and how to invest in NFTs?

Also, the investors such as North Island Ventures, OKEx, Blockdream Ventures, Digital Currency Group, Circler Financial, Alameda Research, and many more became part of this fund-raising series. They had raised 10M in Series A round.

On Wednesday, the Big Time Studio also announced closing a $11 million funds, taking the total funding to 21M, that will be used to invest in the gaming company to adapt to the latest technology.

What Is Big Time? A multiplayer action RPG that makes collectable NFTs accessible to everyone.https://t.co/d5dL6JstU2

Ari Meilich said, we are trying to create all the mesmerizing technology to make it smoother for gaming companies. However, we are building the first game as this is our way to enter the market. This will be a multiplayer action-RPG game that allows you to team up even with six people and dig into the dungeons where you kill the monsters. 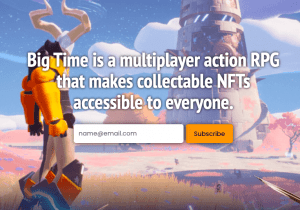 But the way this innovative game is designed, the individual with no experience of the blockchain can start collecting the NFTs without having prior knowledge and experience of blockchain technology.

Ultimately, Ari Meilich says that we’re trying to underline the technology and enhance the value proposition for the gamers. The gaming world will remain forever around us, and we’re just trying to be the “Walled Gardens” so that users can leverage the online platform and blockchain technology.

What’s in this game? Players will be playing roles of different characters in the game, go back in history and save it from collapsing. On the way, the players can earn rare and infamous NFTs on the go which can be later traded inside or outside the game. they are truly building a game that you would love spending your time on.

Imagine having armor and clothing history to choose from, a customisable time machine of your own to travel back to the past and future. Cool, isn’t? Not just that, you would also be able to customise your space and decorate it like you want. You will be able to show your trophies and NFTs you own with your friends within the game.

We look forward in getting to play the game when ready. The game is supposed to be launched for the Windows version first, in early 2022.

When asked about if they have plans to issue tokens, the team confirmed that they do not have tokens or have any plans now to launch tokens.