What is Optimism ($OP)? Everything You want to know about $OP 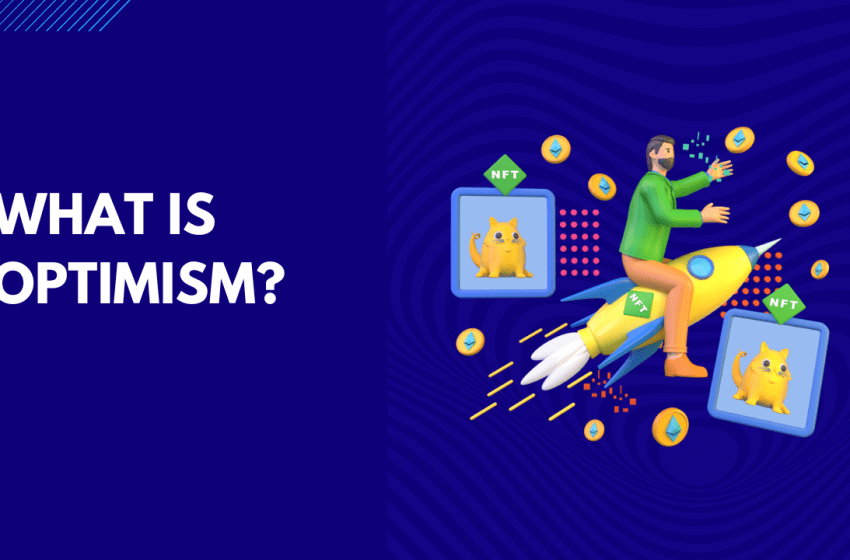 Optimism is a blockchain Layer 2 project that aims to offer quick and cheap transactions to Ethereum utilizing optimistic rollups, a layer two scaling solution. Mostly because, as you may have been aware, Ethereum is quite sluggish, though most decentralised layer 1 solution. Besides OP, other layer 2 projects are Matic, Avax, Fantom etc. Click here to read about all Ethereum alternatives of 2022.

What is the difference between Optimism and Optimistic Rollups?

The much-anticipated airdrop of Optimism’s OP coin took place on May 31, 2022. The airdrop was so popular that it caused the Optimism blockchain to slow down for a short period of time.

What are Optimistic Rollups?

We can use optimistic roll-ups to publish transactions to the blockchain without executing them on Ethereum. Here publish means any transactions made on optimism are actually published internally and are finalized once they touch the Ethereum mainchain.

So, to summarize, an optimistic rollup allows us to move from the Ethereum main chain, which is a very slow and sluggish solution, to the layer two solution, where we can conduct thousands of transactions without having to worry about gas pricing.

When we make those transactions, all we do is write them down and keep a record of them.

Once a number of transactions have been completed, we can roll them all together and treat them as if they were one transaction. So once we’ve finished, once we’ve published all of them to this tiny rollup, we can go back down to the main chain and publish or execute it on Ethereum’s main chain.

o it’ll be set in stone at that time. As you can see from that example, it’s almost completely scalable. The time between completing those transactions on the layer 2 solution and getting it back down to the first layer is the question.

The time between having that rollup published on optimism and having it executed on Ethereum is used to verify that everything that has been published is authentic. If a transaction appears that isn’t supposed to be there, there must be enough time for someone to notice it and erase it.

So it’s really just for checking whether anything was invalid or inaccurate, to see if anything was published on that optimistic rollup because if there was, you’d be publishing a fraudulent transaction on the Ethereum main chain, which is a no go. The most important thing to remember is that it takes around a week for an optimistic rollup to get from being published on optimism to being executed on Ethereum, which is quite a long time.

I think that end-users like you and me who utilize the platform will be given some type of placeholder or credit in the form of Ether for transferring over since, to be honest, I can’t image anyone relishing the thought of their Ethereum being stranded for a week without being able to use it. They could be working on a solution for it, whether it’s a credit or a derivative of Ether.

Nonetheless, this is a really cool technology, and it’s incredibly inventive in the sense that it allows us to grow a lot faster than we could if we had to wait for each 2.0 to arrive. Furthermore, there appear to be few to no compromises in terms of security, owing to the fact that users are rewarded to expose any erroneous transaction outcomes that are published on the optimistic Ethereum chain. As we previously stated, there is a week time period in this situation for a purpose. We want to make sure that no one publishes false information, and in this situation, if someone does divulge false information because people are incentivized to do so, they will be compensated. It’s a win-win situation.

Projects that rely on Optimism

The best thing about optimism is the number of large projects that have already committed to fostering it once it is widely known. This is significant because you must pay a one-time large gas price to migrate from layer one Ethereum to layer two Ethereum.

However, after you’ve reached layer two, you’ll be able to interact with all of the major DeFi projects in the same way that you would normally, with little to no gas cost and near-instant transaction speeds.

So, once you’ve transferred all of your Ethereum, or a portion of it, to layer 2, you’ll want to have enough to play with and enough projects to work on.

So, rather than swapping it and returning to layer one, you may interact and stay in there for a while while using it.

However, it appears that some projects that said they were going to be on optimism with synthetics are already running some form of the private main net.

Then there’s Uniswap v3, which will be publishing itself on both the main chain and optimism once optimism goes live. You have a sizable number of decentralized and centralized parties utilizing and planning to use optimism, which is critical for the ecosystem’s survival. Simply because there are numerous layer two solutions.

The optimist team had to postpone their formal Mainnet debut in order to plan a better community launch.

Their goal is to offer enough time for projects related to the foundation, infrastructure providers, block explorers, wallets, and token bridges to integrate and test.

This means that Optimism will not have a specific date in the future. If you’ve dealt with developers before, or if you’ve been given enough time, you know that things don’t always come out when people say they will.

This is especially true when dealing with developers because, at the end of the day, you never know what kind of bugs, code issues, or other issues they’ll run into.

Not only that, but they’re postponing it because they want to make sure that other projects or the actual DeFi ecosystem are ready for optimism whenever it’s released.

It’s almost as if you’re establishing a theme park, with all of the rides ready to go and taking you practically anywhere you want to go.

If they were to open right now, you’d have an entire playland with just one ride. So it’s logical. Before people arrive, they want the ecosystem to be established.

In the long run, it may turn out to be an excellent explanation.

When was Optimism founded?

It was created in 2019 and is situated in New York. It offers an Ethereum layer 2 scaling solution to help developers create blockchain-based applications.

Is it worth it to buy Optimism?

You can base this on Optimism’s future and the token’s potential in the coming years. You should study about the platform on your own and then decide if you want to invest in it or not. If you are a fan of Layer 2, and would like to buy one with much smaller marketcap, Optimism (OP) is a good choice.

Can Optimism rise in value?

Although digital experts estimate small profits for today’s investors, it will be early to make predictions on Optimism’s token. If the platform does not achieve enough traction, the value of OP could plummet. Always invest prudently and only with money you can easily lose. However, since it is a small marketcap coin, we are hopeful OP will do long for long term investors, once the market is bullish.

What is optimistic ETH?

Optimistic Ethereum is a rollup scaling method that enables users to share payments on the Ethereum network and have them processed quickly at a cheaper gas cost.

Will OP be able to break through its current ATH?

In the year 2022, OP is an excellent investment. Furthermore, Optimism (OP) has a good chance of reaching new highs this year.

In 2022, optimism (OP) has a bright future ahead of it. We may see OP reach new heights as a result of the current changes inside the Optimism ecosystem, as well as in the general crypto market.

The price projection for Bullish Optimism in 2022 is $1.66. As previously said, it may potentially reach its new ATH in 2022 if investors conclude that OP, along with popular cryptocurrencies such as Bitcoin and Ethereum, is a worthy investment.

At the time of writing, OP is trading below 0.54USD.

OP is just getting started. Having said that, do not put all your money into OP or any other cryptocurrencies.

Crypto investment is volatile, and posses huge risk. Please invest only what you can afford losing. I would not invest more than 0.5 percent of what I have invested in Crypto in OP.