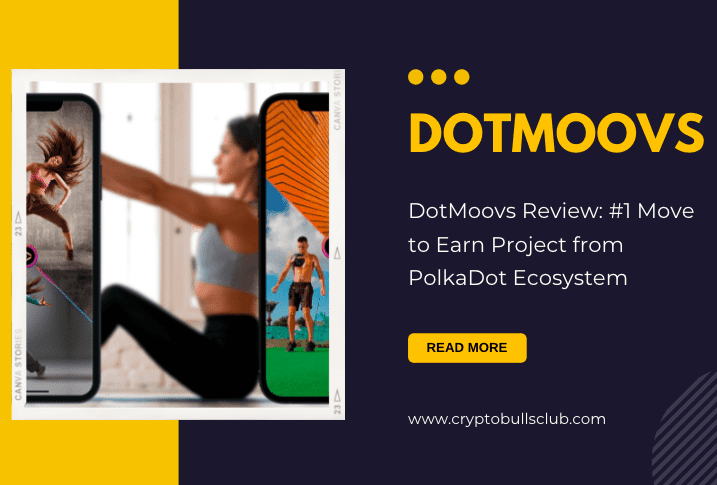 All these activities were mere hobbies till now, you have done them only for yourself. But now, you can do these not only as hobbies but also as a way of earning.

So these activities need not be your profession to earn. Sounds cool? Yes, it is.

To learn more about what I have been blabbering about till now, you need to read ahead. And remember to read till the end. And thus, welcome to the world of DotMoovs! Let’s find out if DotMoovs is #1 Move to Earn Platform from Polkadot Ecosystem.

Essentially DotMoovs is a blockchain-based peer-to-peer sports competitive platform. It is a combination of AI, blockchain, and NFTs, and being a player there you can challenge other players like you on the platform.

Dotmoovs had started with the company’s development of artificial intelligence, a computer vision algorithm, and a sort of arbitration code that detects the various positions and movements of human limbs. And this algorithm is also responsible for keeping a record of the scores of different players in order to understand their skill-sets and how they are performing when compared to other players.

From these developments, DotMoovs put this unique technology into action, started using it for peer-to-peer challenges, by combining it with blockchain technology, and added their own cryptocurrency and some NFT collectibles.

Some unique thing that sets apart this project from other move-to-earn projects like StepN and Sweatcoin is that they require you to run, or walk. And it is the mobile on which the application is there that does the tracking with GPS and all. But DotMoovs employs something like an artificial intelligence referee that basically works as an Anti-Cheating checker when you upload your video. It is this referee that ensures there is no cheating on your part while doing the movement for which you shall be paid. Also, you do not absolutely require to run or walk in order to register your movement with the app. This project intends to do justice to the word ‘move’ and thus it allows all kinds of movement to be monetized. These movements can include freestyle football stances, dance movements, boxing, skating, and basically anything that involves moderate to high-speed limb movements. 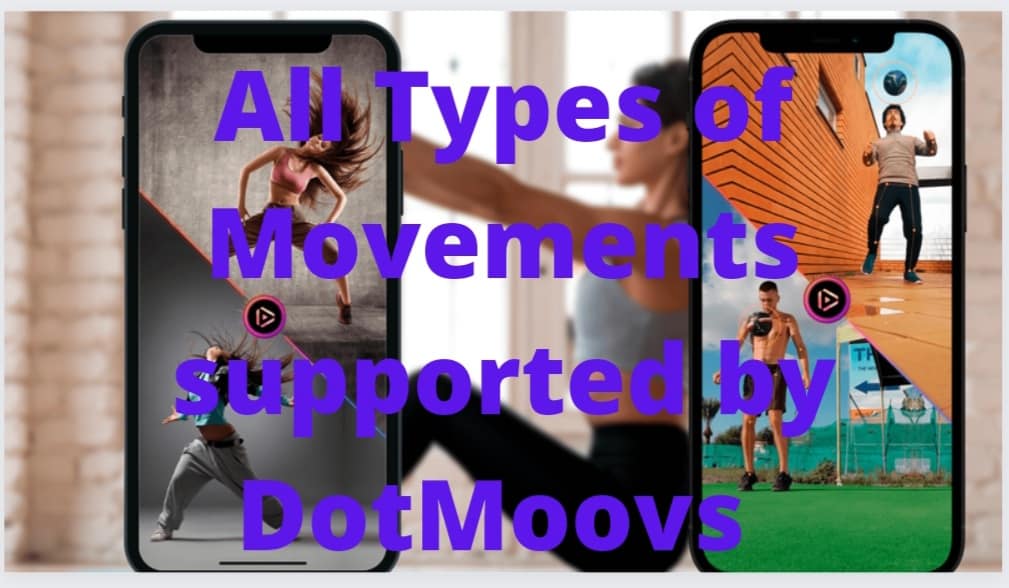 So how does this project intends to work out?

In DotMoovs, all you need to do is perform some activity and record it. Now the DotMoovs mobile application has an inbuilt AI algorithm that reads and detects your movements. So once you put up the recorder on the AI, the AO starts reading it. It compares with other players if it is a competition and also determines the player’s skills as and when required.

But again, as is with these decentralized applications, there is always a catch. A small thing you need to do to even go near that big thing.

For instance, in StepN, it is getting your hands on the activation code that is significant and in DotMoovs it is purchasing some shoe NFTs from the Movesclub site. Only if you hold these NFTS can you get access to the DotMoovs move to earn token MOOV, the game’s revenue!

The DotMoovs project was launched back in June 2021. It claims to be one of the best Metaverse sport competition platforms! It is also reported that launched during the time of lockdown it was aimed to create a platform that would allow sports competitions remotely.

The DotMoovs Tokens is the MOOV token. This token is based on the Ethereum blockchain.

What is the price of the MOOV token? 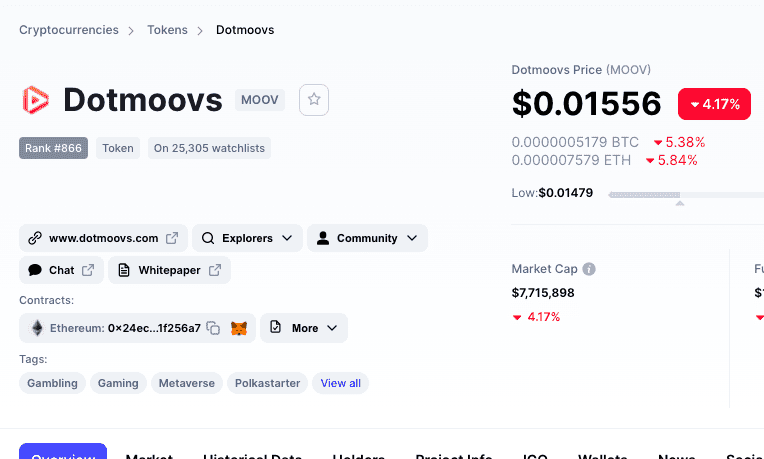 We all know how fluctuating and volatile crypto can be. The sneakers go for the MOOV token. Presently the MOOV token is trending at around 0.015 dollars. This process compared to other times are average because the MOOV token has fallen to as low as 0.007 dollars and also reached peaks of 0.09 dollars per MOOV.

How many MOOV Tokens are supplied?

Presently there have been 100 crores of MOOV Tokens launched.

Where can I buy DotMoovs NFTs?

DotMoovs NFTs can be brought from in-app marketplace places powered by DotMoovs itself.

How To Make Money From DotMoovs?

One primary way to make money on DotMoovs is to participate in competitions and events. This you do by doing some activity and recording it. Now with the help of the AI, the app will determine how skilled you are, compare you to other participants, and then declare the winners. If you win you are entitled to MOOV Tokens or NFTs.

Well, you can also lend out your DotMoovs NFT sneakers to your friends or someone and let them use them for making their videos. And then when they have earned something, you too can make a cut from that.

Now, the utility of the MOOV Tokens is inside the DotMoovs game. As we discussed before, you can earn the token by participating in and winning the competition organized by DotMoovs. And it is here that this game becomes unique. Because while other games might charge a fee and where currency becomes a barrier, DotMoovs does not do any such thing. Its essence lies in just analyzing your videos and if eligible rewarding you for the same. And this makes the game more democratic than anything because it sort of levels the playing field.

You can earn MOOV Tokens by participating as well as by reaching milestones or getting great ranks.

Use Cases Of MOOV Tokens

In terms of allocation of the MOOV Tokens 32% is allocated to Private investors and the public. 24% is for the initial supply in the decentralized and centralized exchanges to maintain a proper secondary market. 24% is allocated to the partnerships and markets etc. 10% has gone to the foundational pool that secures the future of the growth of the company. And 10% is allocated to the team itself to keep in touch with the token holders and users.

In terms of distribution, the public sale was totally unlocked. In the private sale, 20% went to the Token Generation Event and another 20% per month. 25% of Tokens were released to the team quarterly. The remaining percentage is given for liquidity fund and foundational reserve.

DotMoovs can be downloaded on your phone. 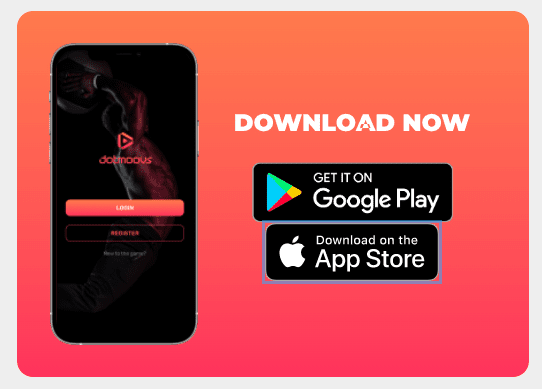 How to buy $MOOV tokens?

You can buy $MOOV on international crypto exchanges.

Now that you have some idea about this literal move-to-earn platform, will you be trying it out? It was after all a lockdown special launch that wanted to ensure people stayed active and fit through virtual sports competitions!

The application and the Tokens are both very young so much cannot be said about their future. But whatever it is for a new launch like this, we, crypto enthusiasts can always hope for the best.

But again, this does not mean we are encouraging you to invest in this game. Because you and we both know how volatile crypto is. No single article (not even ours) can be trusted with all the information. The best option before you start putting your money in such speculative areas, do your own proper research, secure your financial bases and try and consult a professional financial advisor.

As a parting statement, we hope that this article could answer some of your questions about DotMoovs if not all.