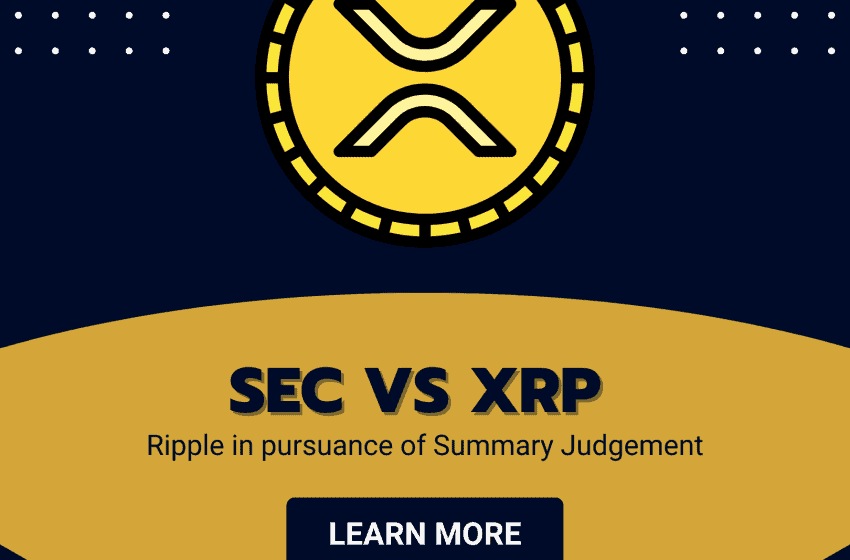 The Ripple Labs Inc and U.S. Securities and Exchange Commission.

In an effort to end the lawsuit which was filed by SEC in December 2020, Ripple requested a summary judgement to end It without a trial.

Both the Ripple and U.S. markets regulators submitted motions to Judge Analisa Torres of the U.S. District Court for the Southern District of New York requesting her to provide a summary judgement, which is a decision made based on statements and evidence without a full trial.

In December 2020, the SEC filed a lawsuit against Ripple, alleging that the business fraudulently generated about $1.4 billion by selling XRP in violation of investor protection laws, while its co-founder and CEO, who the SEC also sued, made hundreds of millions of dollars in trading profits. According to the firm, XRP is used to make foreign payments and is not an investment subject to SEC regulation.

For the past five years, the SEC has been grappling with the question of how to define cryptocurrencies as securities or not. Both Gary Gensler, the current commissioner, and prior SEC commissioner Jay Clayton have stated that the majority of digital currencies are in reality securities that need to be registered with the federal body.

The securities commission noted in the Saturday filing that Ripple did not contest that they issued and sold XRP in return for “money,” which the SEC claimed fits the “investment of money” component of the Howey test — which alludes to a U.S. Supreme Court decision used to determine whether an asset can be labelled a security.

An investment agreement “occurs when money is invested in a joint project with a realistic prospect of benefit from the work of the others,” says the Howey test, according to the SEC website.

Ripple continued by claiming that numerous assets are acquired with the intention of reselling at a greater cost without becoming securities and that although few investors purchased XRP for speculative motives, this does not constitute it an investment agreement.

Regarding this, Ripple stated that there is no proof that would allow a rational fact-finder to infer that buyers of XRP anticipated gains from Ripple’s efforts.

According to CoinMarketCap information, XRP has traded up 7.5% in the previous day to $0.4079 at 11:00am Indian Standard Time.