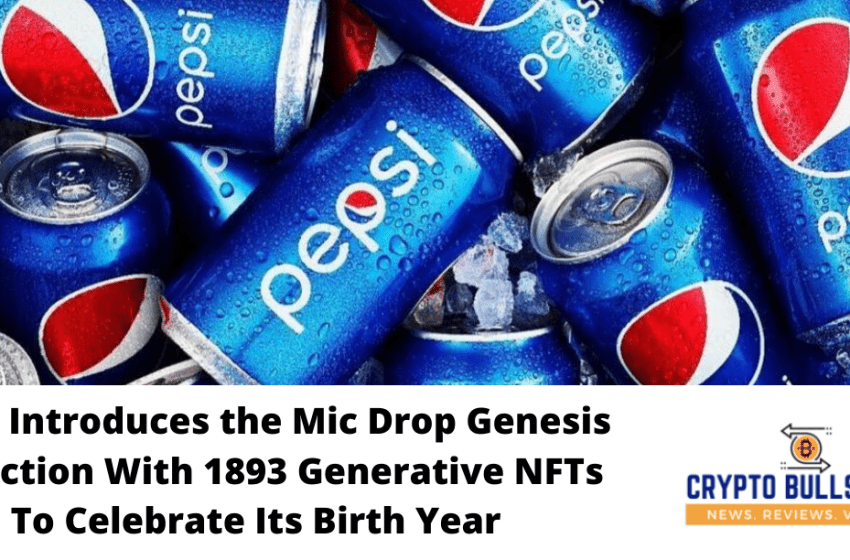 Bengaluru, 10th December, 21: Pepsi has recently announced the launch of it’s first ever collection of non-fungible token (NFT) assets, marking the company’s introduction to the world of block chain technology. Yesterday, the company itself introduced the Mic Drop Genesis Collection, which has around 1893 generative NFTs in order to celebrate its birth year.

Pepsi is among the popular brands of carbonated soft drinks which are produced by PepsiCo. Caleb Bradham invented and presented Brad’s Drink in 1893, but then it was renamed Pepsi-Cola in 1898 and afterwards simplified to Pepsi in 1961. Pepsi-Cola as well as Coca-Cola are indeed the two of the most popular carbonated drinks in the market at the moment.

How to Participate in the Pepsi’s Mic Drop Genesis Collection?

Pepsi’s NFT collection has been sponsored on the online portal micdrop.pepsi.com, and Vaynernft assisted the company in producing the NFT collectibles. The wallet waitlist has already opened today, that is on December 10 at 12:00 p.m. (EST), and those who are approved will indeed be allowed for 2 days to mint their Pepsi Mic Drop genesis NFT for free of cost that means excluding the Ethereum gas fees on Tuesday, December 14 at 12:30 p.m.(EST).

The NFTs would then be able to purchase, sell, as well as trade on the users’ preferred marketplace. Due to tax purposes, the collection is usually only available to the US inhabitants.

To obtain a small quantity of ETH, customers can deposit straightforwardly into their MetaMask wallet or even use widely known exchanges such as Coinbase as well as Gemini, as well as services such as MoonPay. Normally, 0.1 ETH suffices for gas, but the amount of gas could change depending on how crowded the network would be.

It should be suggested that customers on the waiting list can only generate NFTs. To confirm this, the user will link the wallet at micdrop.pepsi.com on December 14, 2021. Those who did this, can tap the button “mint”.

Why is Pepsi getting into NFT World?

The company’s vice president of Marketing said that Pepsi has always been a company with a strong heritage in music as well as pop culture, then it is only appropriate that they bring that heritage into the modern world of NFTs with Pepsi’s Mic Drop Genesis Collection.

They got into the world of NFT because of the support from their fan base. By introducing this they try to favour the concerns and desires of their fans and provide them an opportunity to undergo the NFT world by making sure the NFTs are indeed available for free and displayed evenly as an affordable and accessible opportunity for everyone.

It is advisable to not to miss this golden opportunity that is to engage in Pepsi’s Mic Drop Genesis Collection. If you have some queries, you are free to ask in the comment section.