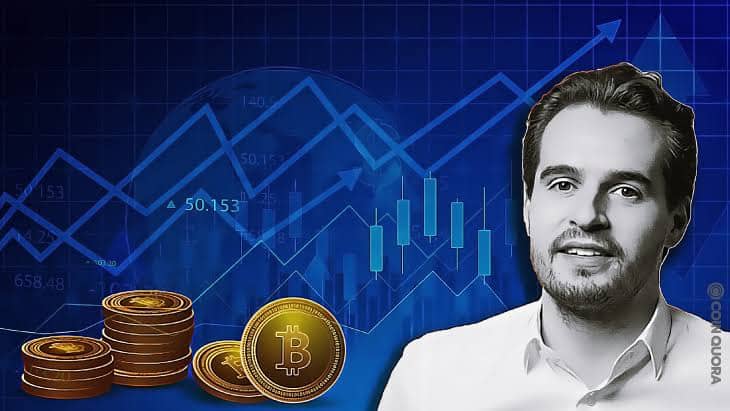 Trenchev spoke to Bloomberg about his point of view on the present market. The Nexo managing partner alluded to the current state of affairs and acknowledged that Bitcoin had reaped benefits significantly from the “loose monetary authority” when queried about the influence of the US Federal Reserve on the current price action.

When questioned about key drivers for Bitcoin, Trenchev restated the results of inflation as a key factor. He also pointed that the present price range of Bitcoin looks to be stable between $32,000 and $40,000. The absence of leverage traders was assigned as one of the causes for the market’s recovery at this point.

Trenchev talked about his Bitcoin price target of $100,000, and said that there has been blowing up of leveraged accounts, and as such there is no leverage in the system. Hence, leverage could build up again which in turn pumps the price up. He even touched upon the slow-moving adoption with institutions as a driving factor for advanced price growth of Bitcoin.

In fact, other crypto critics and analysts see eye to eye with his point of view and are confident that BTC could go up to $100,000. In particular, Lark Davis, a crypto analyst with around 300,000 followers on YouTube and Twitter stated that BTC is yet to reach its final all-time high.

Adoption of BTC in other countries

Additionally, Trenchev also mentioned the recent news about El Salvador. The small country’s President Nayib Bukele has firm intentions of making Bitcoin as legal tender within the country. Furthermore, the country has also placed a huge order for Bitcoin ATMs, and they’re ready to ship out. Trenchev was excited about this news.

Similarly, Texas will also start setting crypto ATMs in its grocery stores. Also, along with firms investing millions of dollars in BTC, celebrities also have also started endorsing crypto for its easy access.

Even in India, the Cryptocurrency Regulation Bill has been proposed which will make Bitcoin an asset class. This is a major step forward contradictory to the government’s hostile behavior towards crypto.

Trenchev even laid out his opinions on the probable adoption of Bitcoin by other countries.

“Not immediately, El Salvador is a small country, 20% of their economy comes through remittances so for them it makes sense, I see some of the latin countries following it up sooner rather than later.”

Eventually when inquired about other cryptos possibly surpassing Bitcoin, his reply was in the negative. According to him, Bitcoin will maintain the position of being the number one digital currency by market cap for a while, and other cryptos could “not at all” offset Bitcoin. He further stated that he was super excited about Ethereum.