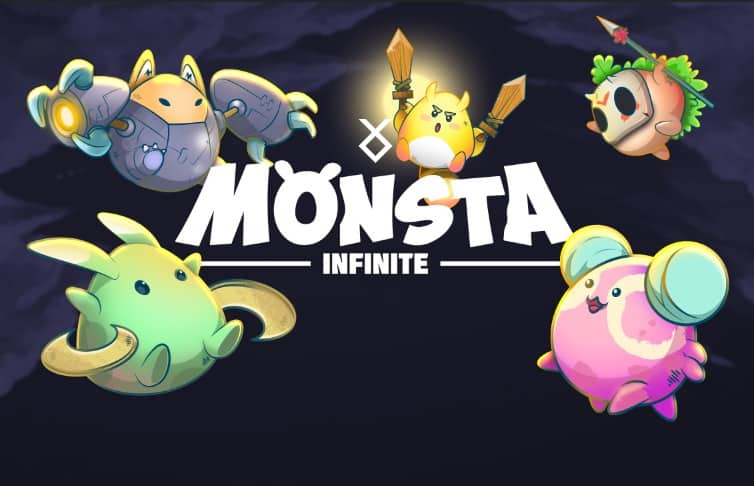 Monsta Infinite employs a combination of turn-based card battle system and the match-three puzzle mechanism for its users to experience a battling game play that is more competitive and interesting. It offers a decentralized gaming ecosystem where anyone is eligible to earn tokens via the game by playing it competitively or as leisure.‌

Monsta Infinite is a NFT Play to Earn (PTE) game powered by the Binance Smart Chain (BSC), that is highly inspired from Axie Infinity, but here’s the catch. Monsta Infinite aims to be the more affordable alternative to the very popular NFT game, Axie Infinity. But the development team noticed several issues as they delved deeper. The problems they wish to address include:

The team behind Monsta Infinite seeks to develop the platform for easier and greater adoption rates of blockchain technology.

Every Monsta team needs a total of 3 Monstas. Each Monsta consists of six card skills, two attack cards and two defend cards. During a battle against the enemies, players can choose from the five cards ((Cyborg, Elf, Orc, HP recovery and MP recovery)) which are shuffled randomly. The player is required to drag the card to the assigned target, for facilitating it to, either an ally or an enemy.

After each round, the player has only five seconds to move the orbs by continuing with the match of the three puzzle mechanism. If the orbs matched belong to the same color class, then their skills can be enhanced. Particularly, HP and MP orbs are special orbs which have the ability to restore the Monsta’s HP and MP.‌

The initiation of the battle is decided from the difference between the AGI and the INT, which will determine the turn for each Monsta. Some specific cards held by the player has the power to affect the battle sequence and restrain their opponents from making a move, which makes the battle more dynamic and strategic.

The MONI token serves as the native utility token for Monsta Infinite’s governance. It is BEP-20 token, which adheres to the standards of BEP-20 and is powered by the Binance Smart Chain (BSC).

Holders of the $MONI token are qualified to claim rewards by staking their MONI tokens, playing the game actively and by taking part in the voting procedures related to the game’s  core governance.

Players can also earn additional $MONI tokens if the users play the numerous other games within the Monsta Infinite gaming universe. 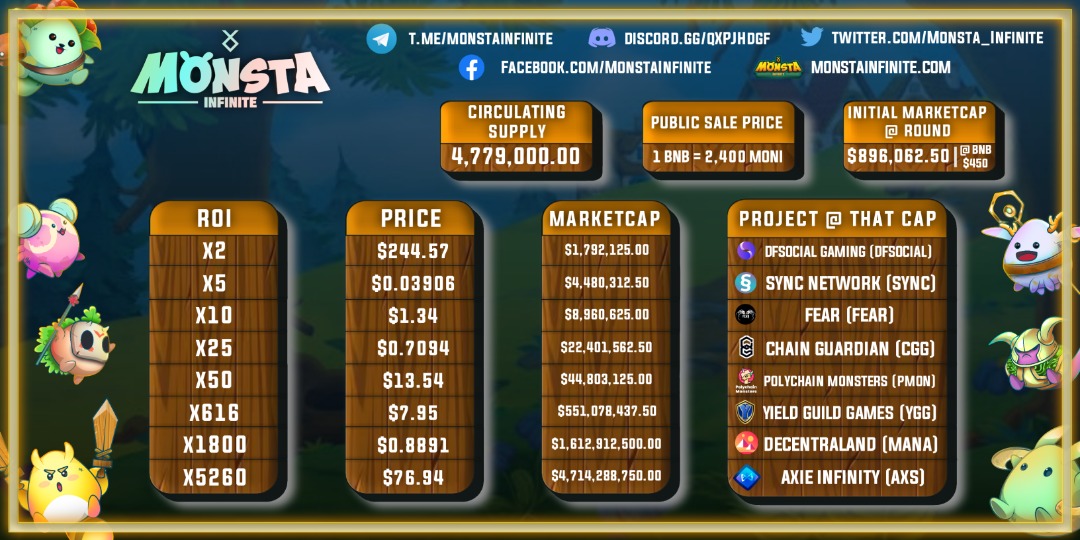 The token distribution is as follows:

How to earn on Monsta Infinite?

Monsta Infinity: Worth the Hype?

The marketplace is yet to be released. The whitelisting of the MONI tokens has begun. The pre-sale of the tokens has already started. IDO coming up on multiple platform. The game will be publicly launched around early 2022. To find out more about their development road-map, click here.

After the recent success of Pocoland, the hype around Monsta Infinity has gone up. Their IDOs on multiple platform is adding to the craze. They already have more than 150k Twitter followers. IGO on Oxbull is set to happen on 15th September, 2021. DuckDao and Moonstarter, Ignition Paid are some other IDO platforms. Their next IDO is on Moonstarter on 16th of September. $MONI token Presale 1.0 has officially SOLD OUT in 27 seconds. Currently Presale 2.0 is all set to happen. The lisitng date of $MONI is not yet decided but it should happen anytime soon.

By now, I am sure you must have been able to make a decision on whether to invest in upcoming Monsta Infinite IDO’s or not? If you ask me, I will be all in.
Our Ratings: 4.5/5
Tags: BSC moni monsta infinite