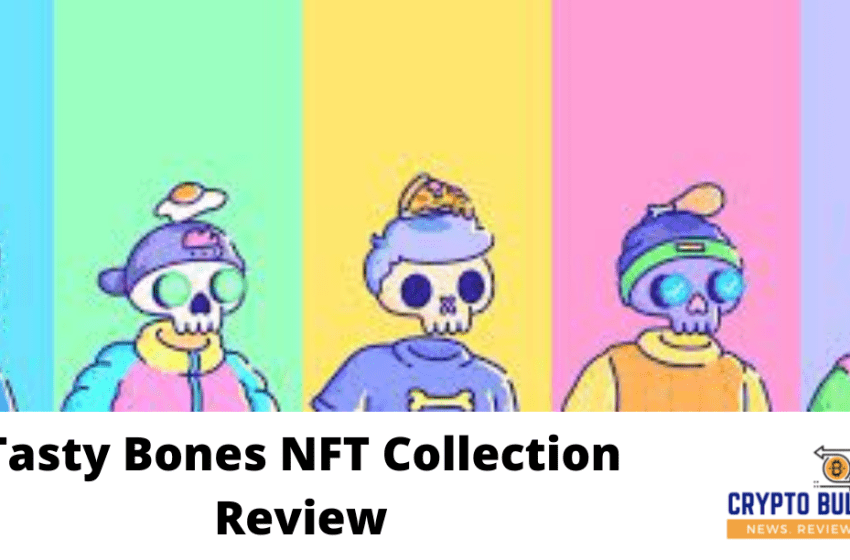 The NFT Collection of Tasty Bones is currently among the most talked-about initiatives in the industry. This is already gaining traction on Twitter, with nearly 224,000 followers before its February 2022 launch. On the Ethereum network, NFTs of Tasty Bones seems to be a set of five thousand skeletons. Thus, there’s something about this five thousand – items initiative that is so exciting, and know that why there is conjecture that it will follow the lead of Doodles. Let’s get started with the review about Tasty Bones NFT Collection.

5000 skeletons “gather selections of foodstuff from either the Land of the Living then They were returned to the Land of the Dead.” are featured in the collection. So yet, the initiative has just shared a few teaser photographs on Twitter, and everyone agrees it has a very catchy riff, similar to Doodles.

It’s getting a lot of attention for its colourful imagery, which is basic but detailed. The colour scheme appears to be simple and understated. As a result, the community has already classified it as a “cool project.”

The project is further shrouded in mystery since their channel on Discord is invite-only. As a result of the limited availability as well as exclusivity. Furthermore, the Discord strategy of the team has resulted in a strong as well as natural community. Furthermore, other than social network links as well as a “shorty coming” banner, the website contains very little information regarding the project. This emphasises the fact that the Discord Channel has all of the exclusive information.

Royal Labs, situated in Delaware, is an NFT launching pad. They’re in charge of smart contracts as well as Web3 interoperability. The team does not include connections to their Insta, Twitter, LinkedIn or even other social media accounts that can provide details about their experience in business beyond the development firm.

We are always wary of investing in startups led by founders who aren’t doxxed since the risk is considerably higher of a rug pull. The excitement surrounding this project, on the other hand, is genuine, and the artwork is outstanding.

People have been calling this initiative the “new Doodles” because of the art. Most of the diverse colours and basic designs immediately give you a Doodles sense. It’s quite pleasing to the eye, basic yet detailed, and uses a variety of colours. The artwork is excellent, although I’m not the one who feels so, based on their enormous Twitter following of over 224,000 followers.

How does Tasty Bones NFT work?

NFT of Tasty Bones  initially appeared to really be strictly a Pay – for – performance NFT endeavour, and as per the Twitter, company want to provide additional usefulness to their owners. Since their homepage is limited, there’s not really much information on its post-mint intentions readily available.

With their Tweet, they’ve revealed everything that we have to understand about just the strategy and also their plans for the future. Tasty Bones must register to organizations for instruction before travelling into to the World of the Living to who had their first meal distribution following the revelation. As soon as Tasty Bones were interested in acquiring food, Supernatural Beings will attack them inside an attempt to take their meals.

How to Purchase the NFT Tasty Bones?

In February 2022, the Tasty Bone’s NFT would release its ten thousand Tasty Bones collection. The 17th calendar emoji in their Social media account, Twitter bio could have been a clue at the minting date, thus it’s most likely nothing. The company has now stated that a Tasty Bone’s NFT will cost ETH 0.070 to mint, which is a very reasonable price.

Because of the current volatility in the cryptocurrency market, several projects are delaying the announcement of the official minting price. Teams do not want to declare a minting price in order to determine the price of a crypto tank since It places the company in an awkward situation.

The Tasty Bone’s NFT would have a pre-sale the day prior to the public sale, probably in February 2022. Many followers are over there gazing in because the Tasty Bones Discord is closed (invite-only).

How to get listed on the Whitelist?

If users want to be on the whitelist, then must contribute to the community. Fans can accomplish the following to obtain a spot, according to the team:

Tasty Bones has gottena huge proportion of buzz in the weeks preceding its release, and it’s been dubbed the “new Doodles.” I believe that this project will sell out, and that at a minting price of ETH 0.070, holders as well as investors will have a great opportunity to make money.

It’s quite high-quality, features a huge proportion of vibrant colours, and is simple to replicate.

The mint price of 0.069 ETH is also a plus for this initiative. This isn’t just a fantastic pricing for an NFT initiative, although it is quite reasonable. This low price demonstrates that the team members are concerned about their neighbourhood. It does not force buyers to abandon their initiative, as well as that it enables holders to profit as well. The project is still in its early stages, so if you really can figure a way to enter their Discord, take advantage of it so you don’t miss out on the juicy details!