PhotoChromic: Blockchain Based Verification Platform That Can Affect the Way We Use Passports in the Future 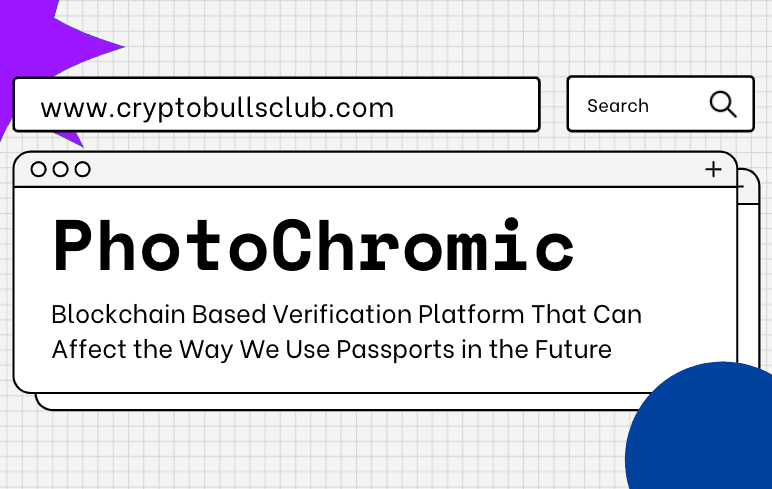 The current format of passports has been used for a long time. Needless to say, it was upgraded a couple of times by adding chips and facilitating travel between countries. However, we’re a far cry from reaching the perfect passport. At the moment, our current system has many flaws that can disrupt border crossings and ruin someone’s travel plans.

This article will make a short overview of the history of passports, examine their current state, and explore possible options for the future.

It’s difficult to pinpoint when passports originated, as there is evidence of travel documents dating back to hundreds of years ago. However, their first official inventor was King Henry V of England, who introduced passports in the 1414 Act of Parliament. In the coming centuries, there were several similar attempts, including standardized pass-cards across German states in the 19th century.

The actual need for passports increased in the late 19th and early 20th centuries as new modes of transportation appeared. All international passports were made compliant with ICAO standards in 1980, allowing border control to process travelers more quickly using optical character recognition.

After that, the biometric passport was created, which included travelers’ personal information and photographs for easier identification. Nowadays, passports have a contactless chip that contains one’s digital signature and ensures data integrity.

There are many ongoing issues with passports at the moment. The most common one is travel document fraud, such as:

However, passport fraud is just the tip of the iceberg. Namely, travel will not always be ideal, and when many people are moving across borders, all hell can break loose on border control.

Take a look at the current situation in Ukraine — at the moment, more than three million people were forced to leave their homes and go to the neighboring states. Some of them might not have a passport at all, but there are probably different rules during wartime, and people may be allowed to cross the border without a valid travel document.

People with no passports or expired ones looking to escape the horrors of war definitely don’t think about the validity of their documents first. They just want to survive, so they end up in a foreign country without an official identification paper. For many, this is just the beginning of another horror show — endless bureaucracy and kilometers of red tape.

But is there a way to prevent that?

It’s no secret that passports have undergone continuous upgrades ever since they were first standardized. All the problems discussed above would have been worse without some of the technologies we already use. That said, there’s still plenty of room for improvement, and one solution stands out from the pack when passports are in question — blockchain.

Blockchain is widely used in all spheres of life nowadays, including upgrading our passports and our entire digital identity.

A project called PhotoChromic is currently working on blockchain-based verification. You can think of it as a framework for creating and managing your digital identity, delivering independent management, and immutable security at the same time. PhotoChromic will initially run on Ethereum, Polygon, and Cardano, but it’s aimed to be a multi-chain protocol. Blockchain was popularized with the introduction of Bitcoin, and some of the brightest minds in the world started finding additional ways to use this popular technology.

To understand the bigger picture and grasp how blockchain can help with passports, we need to look at how the current databases work. All information from your passport is stored on a centralized server that your country’s government owns. If someone manages to make a successful cyberattack, your passport information can be stolen and used for fraud, compromising your identity.

There are two models on how passports (and digital identity) can be combined with blockchain.

First, data would be recorded on the chain directly so that authorized devices, such as border control points, could easily access it. Users would have to use a mobile app to provide consent for having their data scanned in that case.

The other model is called self-sovereign identity. In this scenario, all travelers’ sensitive data would be stored on a personal device, like their smartphone or tablet. Then, blockchain would only keep proof of validity and certificates for the information found on the device.

To sum up, as means of transport continue to improve, more people will move around the globe, be it for work or pleasure. Because of that, we need to find a way to make passports convenient, secure, and safe. Most importantly, we need to ensure that nobody can access the info on them unless authorized, and blockchain offers the best chance of achieving this.