What is Neo Tokyo Identities NFT Collection? Everything you need to Know 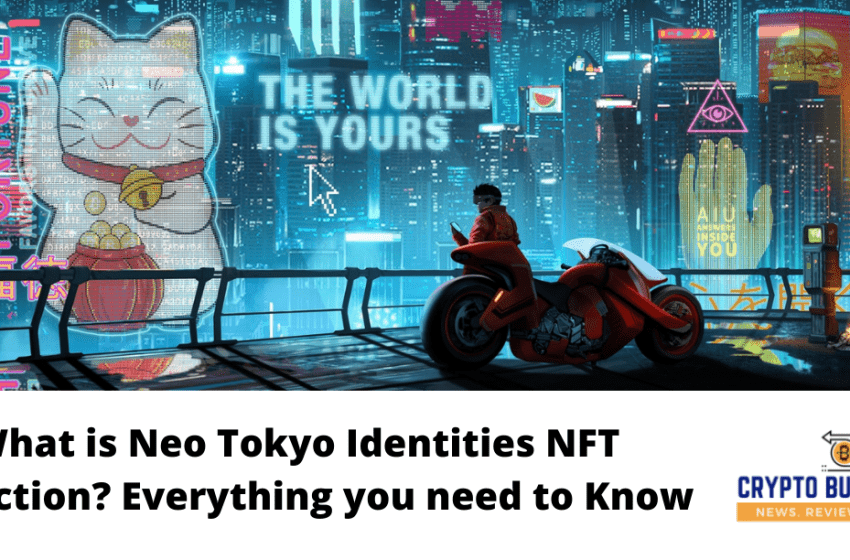 The Neo Tokyo NFTs were released in October 2021 and were created by the well-known Crypto YouTuber Alex Becker as well as developer Elliotrades. The collection is available on OpenSea Marketplace, runs on the Ethereum blockchain, and is divided into four parts. Basically, these are Neo Tokyo Identities, Vault Cards, Item Caches, as well as Land Deeds . However, unlike the typical NFT project, Neo Tokyo Identities is kept under wraps. People must enter whitelists by attempting to solve riddles in order to mint the NFTs. It’s also difficult to enter their Discord. Everybody is discussing non-fungible tokens (NFTs), and for a valid reason: the market is exploding. Another project making a splash is Neo Tokyo Identities. Read further to know everything about Neo Tokyo Identities NFT Collection.

Neo Tokyo was originally a 1987 Japanese animated film that is regarded as a cult classic in the anime community. The film comprised of three 50-minute short stories, each one with a distinct screenwriter as well as director. The film is set in an urban dystopian environment. People would be participating in riddles in order to get NFTs and access into this project. He started putting out these riddles and clues all over his social media and people were trying to solve them. The people who did ended up getting an id and at the time there still wasn’t a full understanding of what exactly the id did. In the coming weeks he started to do more riddles and people started to solve them to win more free NFTs. People ended up getting 3 more NFTs which were vault, item and land.

People are also given a cryptocurrency called bytes which are going to be used in the game and the individual NFTs and the bytes were starting to sell for extreme amounts of money. It is eventually revealed that in order to be a citizen of Neo Tokyo, you will need all the 4 items to upload. The ape citizen is the culmination of all 4 of those NFTs put together.

The NFT collection does not appear to have had any official ties to the film, but that was undoubtedly influenced by it. The NFTs are nothing more than text information of the various aspects. Alex Becker, a popular Crypto YouTuber with over 1 million subscribers, launched the Neo Tokyo NFTs. The Neo Tokyo NFT Collection has been divided into four parts:

You can see how the components of a blockchain-based video game are now being assembled. One thing that perplexes me is that when the items as well as character types in this game cost significant amounts of money, I’m not sure how many people would be able to enjoy it.

Alex Becker and Elliotrades, crypto YouTubers, debuted the Neo Tokyo Identities NFT project in October 2021, with a governed minting strategy. Minting Neo Tokyo NFTs needed first passing a test to be added to a whitelist, as well as NFTs appearing as codes that transform into avatars once uploaded.

The Neo Tokyo NFT project aims to create a community which will advantage its members in the long run by providing them with opportunities to earn additional income as well as other benefits. One of its projects is a Neo Tokyo metaverse game in which NFT avatars serve as characters. Furthermore, the project will invest in crypto games as well as provide its members with instant access to them.

The value of Neo Tokyo NFTs has skyrocketed as investors see them all as a way of generating additional income while also gaining exposure to the metaverse. Meta Platforms, the parent company of Facebook, and a slew of other companies are making significant investments in the creation of the metaverse, which is predicted to have a larger economy than that of the physical world.

Neo Tokyo Identities consists of 2018 identities as well as 2500 vault cards. Becker describes the collection as the “fairest NFT drop in history.” There would be no pre-sales, it will be free to mint, as well as Becker and Elliotrades each will have one NFT.

What is the net worth of Alex Becker, the founder of the Neo Tokyo Identities project?

Alex Becker has established several companies in addition to the Neo Tokyo Identities NFT as well as gaming projects. Source Wave, Market Hero, as well as Hyros are among his digital marketing startups that yield millions of dollars in revenue. Becker served in the Air Force before venturing into business. Becker, who was born in 1988, had quite a net worth of more than $1 million while he was only 24 years old. He has now become a multimillionaire, with a net worth of much more than $10 million.

Is it worth joining the Neo Tokyo Project?

The most important factor was Becker’s desire to establish a community of extremely high-level individuals interested in the crypto space, crypto gaming, as well as the Metaverse. He is attempting to bring all of the top-tier people into this community and so far a lot of them have joined. Certain citizens will be able to invest in these games that no one else will be able to. So being able to invest in these projects at an early stage almost guarantees that you will make back the money you have put into it, plus a lot more. Regular citizens and Elite citizens are the two types of citizens. The elite simply have more rare items and have access to more things that ordinary citizens do not.

They have announced that they are doing the meta tournament which is going to be live streamed on Twitch. This has not happened in the history of crypto gaming and it’s absolutely crazy to see and jumping into the tournament and being able to potentially make a lot of money. One of the coolest functions of Neo Tokyo is that your character will yield bytes every single day. The amount of bytes that your character yields varies depending on all the different items that assembled your character. The craziest part about all of it is that it is completely free. Everyone who got these citizens  and ids got them for free. They literally just had to solve riddles. So, I think that it is worth joining the Neo Tokyo project as you can earn a lot of money.

The Metaverse appears to be the game changer, and any investment in Neo Tokyo Identities NFT Collection or other Metaverses may turn out to be a good bet. There is a lot of excitement surrounding Neo Tokyo and all of the things we currently know, but there is so much more that has yet to be announced that will be added to the community on a regular basis. If you have any further questions, please leave them in the comments section.