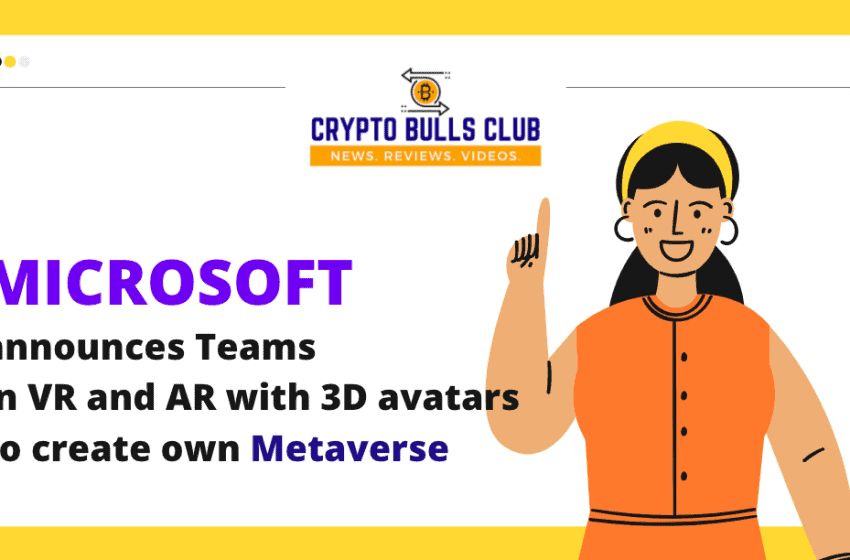 Microsoft has entered the fray to create a Metaverse within Teams. A few days back, Facebook renamed to Meta in an effort to create virtual places for businesses and consumers. Next year, Microsoft will integrate Mesh, a collaboration platform for VR experiences.

The Virtual Meetings are here to stay: Microsoft

With the advent of 3D avatars and immersive spaces to Teams, Microsoft is taking virtual meetings more carefully. When you don’t want to turn on the camera, your 3D avatar will be able to participate in meetings. Microsoft will also use audio cues to animate your face as you converse.

How will this work?

Microsoft Teams users will be able to appear as avatars in meetings and tour immersive virtual spaces thanks to mixed-reality innovation. “The metaverse facilitates shared experiences across both real and digital worlds,” said Frank X Shaw, Microsoft’s corporate vice chairman of communications in an interview.

“As organisations speed their digital transformation, the Metaverse can help people meet in a digital setting, make meetings more comfortable using avatars, and promote creative collaboration from all across the world.”

Mesh, a new mixed-reality technology that helps users feel like they’re in the same room as each other, was originally announced by Microsoft earlier this year. However, the business has now offered a preview of how this technology will be implemented into Teams. Users will be able to create customised 2D and 3D avatars to represent themselves in a Teams meeting when Mesh for Teams launches in 2022. Other guests may likewise be represented by avatars, and they may continue to appear on video with a static image or bubble displaying their initials.

Using it as a framework, organisations will be able to use and create immersive workplaces, or metaverses, inside Teams.

In a nutshell: Avatars in Teams are supposed to work in both ordinary 2D and 3D meetings, despite the fact that they are plainly optimised for utilisation with a VR or AR headset. Essentially, the virtual environments and animated avatars in Teams should be available from a variety of devices thanks to Microsoft Mesh.

“As the digital and physical worlds merge, we’re inventing a whole new platform layer called the Metaverse,” Microsoft CEO Satya Nadella said during event. “We’re entering a new period in which you and the important job you accomplish will be more significant than ever.”

Microsoft envisage virtual places inside Teams where members can network and socialise through games, as well as collaborate on assignments utilising Microsoft tools.

This virtual environment quickly proved valuable, since the corporation utilised it to enrol additional employees throughout the epidemic.

Microsoft Teams large enterprise user base and integration with its cloud computing, teleconferences, plus Microsoft 365 product family naturally establish it as a formidable rival for would-be metaverse users.

Keeping it Real and stressing on Compassion

Satya Nadella, in an interview with Harvard Business Review stressed on how Metaverse is the new future for team collaboration but also how everyone should have realistic expectations. Below is what he said, summed up beautifully, to understand the whole idea better and also keeping us curious about the upcoming Meta Tussle.

For example, when we see all of the data, the reality is close to 70% of the people say they want flexibility. At the same time, 70% also want that human connection so that they can collaborate. So therein lies that hybrid paradox. Interestingly enough, if you look at the other sort of confounding piece of data: 50-odd percent of the people say they want to come into work so that they can have focus time. Fifty-odd percent also want to stay at home so that they can have focus time. So the real thing I would say is right now, it’s probably best not to be overly dogmatic. Because I don’t think we have settled on the new norms.

That’s what compassion is. That is the basis of idea generation. While we say that creativity is really all about fulfilling unfulfilled, undefinable market demands, we mean unfulfilled and expressed market demands of individuals and organisations made up of people. You must also have a high level of empathy. So, I should say that the basis of all invention is compassion, which would be the greatest humane characteristic we each possess.