What is Kusuma? KSM Price Prediction and Analysis 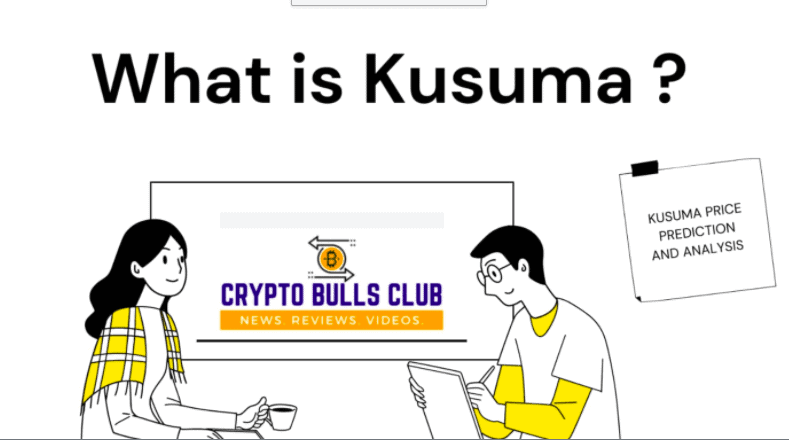 Kusama has been one of the best performing crypto coins since 2020 and has given enormous returns to anyone who invested early. If you are planning to buy Kusama token now, it is important to gather information about the project. Learn what is Kusama and what is the price prediction of KSM for 2021 and beyond and what is its relation with Polkadot.

Polkadot is one such cryptocurrency project which seeks to power the decentralised future of the internet. Its platform is interoperable with other blockchains and it allows for the creation of smart contracts and new blockchains (and tokens). Kusuma describes itself as, “Polkadot’s wild cousin”.

Let us have a look into this new blockchain-based system that is related to Polkadot.

The Kusuma Network is a complementary aspect of the Polkadot Network. The Kusuma network was created by the founder of Polkadot, Dr. Gavin Woods. It is an experimental blockchain network that is designed to solve the Polkadot ecosystem’s concerns of coding vulnerabilities.

Kusuma is a scalable network of specialized blockchains built using Substrate and nearly the same codebase As Polkadot. Briefly, it is a place for initial proof of a project before it is carried out in the Polkadot Network. It is designed to provide a massive interoperable and scalable framework for developers.

The Kusuma network is the early, unaudited and unrefined version of Polkadot developed to serve as a testbed for developers who are looking to innovate, test or deploy their blockchain projects and use it before launching it on Polkadot. This will test any early bugs, problems or security breaches beforehand and will give a fine and safe finished project.

What is a KSM token?

KSM is the native token of the Kusuma platform. This token can be used by holders to stake, become a validator, nominate a validator, vote on the governance mechanism of Kusuma network, interact on parachain auctions and avail all the features of the platform. Kusuma is a permissionless network and anyone can come along and start using it.

There are a total of 10 million KSM tokens in circulation. The latest reports suggest that Kusuma has a circulating supply of 8.47 million. But luckily the maximum supply for KSM tokens is not fixed and it keeps increasing at an inflation rate of 10% per year.

The initial KSM token distribution reflects Polkadot’s DOT token. Anyone who bought DOT in the sale also received an equal share of KSM. The DOT token sale participants had KSM tokens airdropped to them at a 1:1 ratio. So, everyone who participated in the Polkadot genesis sale can claim an equal amount of KSM.  You can claim KSM by signing a message with the Ethereum account that holds your DOT indicator tokens. There is no deadline for claiming KSM.

What does Kusuma Do?

Kusuma is often referred to as the “Canary Network” for its wild cousin Polkadot in reference to the old practice of miners carrying canaries with them into a coal mine to receive an early warning of toxic gases that could hurt the miners. In this network, Kusuma is the canary that forewarns the developers of Polkadot about any bugs or problems related to the code or blockchain that they are building. The “wild cousin” of Polkadot, asks the developers to “expect chaos” and warn them that there are “no promises”

Kusuma is an unaudited version of Polkadot. It is built on the same codebase, but it is unrefined and intended to act as a development environment to test new features before launching them on Polkadot. But it is to be noted that Kusuma is a real blockchain network and not just a testbed. It has its own governance, its own token, and its own operation. Even the users can participate in the Kusuma Network as builders, network maintainers and validators.

Kusuma functions as a decentralised unregulated and independent main network. It works as normally as Polkadot and carries out its operations smoothly.

Kusuma was built on the same codebase as Polkadot. It was also built by the same team as that of the Polkadot network, a company known as Parity Technologies. Parity technologies consist of some of the world’s most successful blockchain engineers, and has over 100 employees in total spread throughout the world.

Dr. Gavin Wood is the founder of Kusuma Network. He initially began originating blockchain as the co-founder and CTO of Ethereum. He invented fundamental components of the blockchain industry, including Solidity, Proof-of-Authority consensus, and Whisper. He is a world renowned computer scientist and Programmer.

Kusuma Network is funded by Grants from the Web3 foundation. Peter Czaban, the co-founder of Polkadot and technology director of Web3 foundation is also the team member of Kusuma. Web3 foundation helps Kusuma with research and community development.

What Does Kusuma offer?

Kusuma is significant among other blockchain platforms since it is built for developers who want to launch projects.  With Kusuma, you can bring to your project the following features :

How to buy KSM token?

Kusuma is currently available for trading on numerous platforms including Binance, OKEx and Huobi, Bittrex, and Kraken  Let us see how you can buy KSM token on Binance platform:

One can also get a KSM token in the following ways :

KSM token initial price was as low as $1.74 on December 14th, 2019. In January 2020, the prices were as low as $1 which was the consequence of a common opinion that Kusuma was originally built as a testbed for Polkadot.

People believed in buying DOT more than KSM. After bouncing between $1-$1.20 between January and almost half of February, the prices finally started going up and reached $3.41 on March 4th.

This was a substantial growth.the prices kept soaring up throughout the year , but it witnessed an exponential growth in August 202 when the KSM token prices went from $10 to $46 in the same month. This was the response to the launch of the Polkadot mainnet. The year ended with a boom and the prices were recorded as $62.04 on December 30th.

The prices hit a staggering $623.75 on May 18th and have retreated since then. This drastic growth in the prices are a sign of growing bullishness.

KSM is a strong buy in a monthly chart 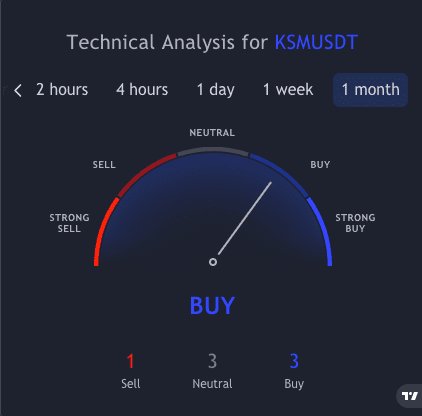 KSM is a SELL on the weekly chart. Other than that, in daily, hourly, 30 minutes, all chart gives a buy call.

KSM Token price has impressively risen above many key resistance levels. The Crypto analysts are surely bullish on the token. Let’s take a guess at the tokens prices :

DISCLAIMER : The price predictions are a wild guess depending on the past performance. This is not financial advice. Please DYOR before investing.

These nominators also receive a fraction of the inflation reward if their validator is selected. Validators who use unfair means or dishonest ways to operate the platform can be deselected and their stakes will be instantly slashed.

Kusuma also uses a queuing mechanism based on Merkle trees to resolve cross-chain transactions. The chain validators are responsible for moving transactions from the output queue of one parachain to the input queue of the target parachain.

The entire process of validating each input and output makes it secure, trustworthy and reliable. The Parachains also bring security, speed and scalability.

Let’s look at the price forecast of Kusama.

What is the price prediction of Kusama in 2030?

Kusama is expected to be worth a little less than 1500 USD.

What is KSM price prediction by the end of 2021?

Is Kusuma Worth Investing in 2021?

If you’ve been following the updates of Decentralized Finance (DeFi), you know that KSM’s prices are about to explode. And, if it is to follow Polkadot’s lead, crypto analysts believe that Kusuma might just be the next best thing. The network is very promising and has given exceptional returns in the past one year.

Hundreds of projects in the Kusuma network are a plus for the KSM token prices to rise. Another important aspect that adds on to KSM being a valuable asset is its founders. It was developed by the same visionary mind that helped build Ethereum and Polkadot.

A project like Kusuma empowers developers and is hence expected to see skyrocketed prices very soon. So, if you haven’t invested in it yet you might want to do it now. There is no good reason to neglect such a potential crypto.

Kusama looks to have a great future as Kusama Crowdloan is ongoing. With more crypto investors knowing about Crowdloan, they would jump in and stake their KSM which should drive the price further up.