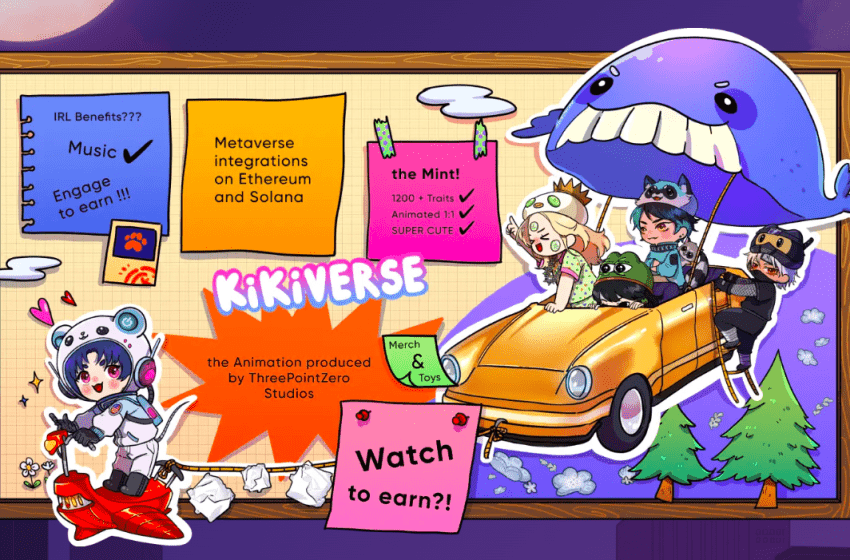 Kikiverse is one of the rising new mutli chain projects, it is inclusive of both SOL and ETH and is even integrated in the SOL and ETH Metaverse. However, Kikiverse NFT collection exclusively trades on Solana.  The entire artwork for the project has been done by the legendary FourLeafClover it is also part of a larger watch to earn animation series. The Kikiverse website goes into more detail about the project stating how there more than one thousand two hundred ‘extra cute’ hand drawn character traits or unique features, not only that but there are also more than a hundred unique characters as well. To top it all off all of these traits and characters have been hand drawn by FourLeafClover himself. The entire collection was more than six months in the making to get to the final products.

One of the unique aspect of this project is that it is led and founded by a woman which is rare to see in the NFT space. The primary founder of this project is cborg.eth (twitter handle). She along with three others, who are PepeCloverNFT (twitter handle), NFTmickrich (twitter handle) and Bas1call (twitter handle) have come up with a new way to make NFTs more fun and appealing. What makes this project stand out and become instantly recognisable is the artwork behind it. It is as the website says extra cute which is an accurate description for the work that has been done. All the characters come with their own unique traits and this means there is something for everyone.

Perhaps the most exciting part about this project is the animated series that will launch later. The animation is being done by ThreePointZero Studios. Although not much information has been put out by either the founders or the Kikiverse official account itself it is safe to say that by the looks of it, the animation is going to add yet another silver lining to this project. The Kikiverse twitter account does mention it in its bio that the animation is in production phase so we should expect it to launch soon.

The collected was minted in three phases. First was VIP only meaning investors and contributors of the project itself. Second was for the SOL and ETH and third phase was for the general public.

Another thing which sets this project apart from the rest is its approach when it comes to the roadmap. The website mentions the roadmap as being dynamic meaning they are not going to follow a strict path and instead consider other things such as the community which will build around the project. This can hugely work in the favor of the project because of how engaging such a tactic can be.

As I mentioned earlier the Kikiverse NFTs are also a part of the Solana and Ethereum Metaverse which means that in the future these NFTs could serve as tickets to that digital space and even carry exclusive perks. The website also talks about potential merchandise and toys.

Kikiverse is currently having a floor price of 2.97 SOL

How to buy Kikiverse NFT Collection?

Kikiverse NFTs are trading on Solana NFT marketplaces. You can buy from the following marketplaces:

Kikiverse although still being in its early stages shows promise as a potential big time NFT and Metaverse project. It has been backed by established artists in the NFT space and also includes HGE.SOL the biggest whale on Solana as its advisor. All in all the project looks like it is going to continue to increase in value as its final perks and features get released. Kikiverse is one of the top Solana NFT collections of 2022.

Who is the founder of Kikiverse?

The founder of Kikiverse is Cyborg

What was the mint price of Kikiverse NFTs?

The mint price of Kikiverse NFTs was 0.5SOL and is currently above 5x. At the time of minting, one could have minted at max 2 NFTs per wallet.

Who is the artist behind Kikiverse?

What marketplace was Kikiverse NFT minted on?

The NFTs were minted on Magic Eden NFT Marketplace

Disclaimer: The NFT collection looks promising, but please keep in mind that this NFT collection is entirely new and will only succeed only if it meets its roadmap, and the community keeps growing. Do not invest a lot of money into this project.

Rahul is a 3rd year Graphics and Multimedia student from St Pauls's Institute of Communication Education (Bandra). His work ranges from writing articles to designing adverts, social media posts and much more.