Best Innovative Peer to Peer Exchange Networks and their Significance: Qtum and Envision 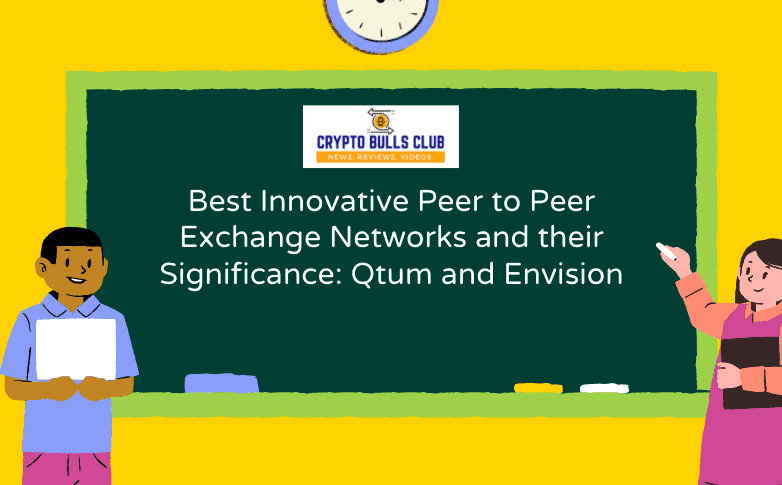 The Peer-to-Peer (P2P) network is the basic foundation of the crypto industry. Though the concept of P2P exchange of value has become popular since the Bitcoin invention, the idea goes back to the 1990s when a college student Shawn Fanning created Napster, a music-sharing service. Today, the P2P model is one of the core attributes of blockchain technology, and it has found a new use case with the advent of cryptocurrencies.

A P2P network can be defined as a decentralized communication between two peers or nodes and avoids a central server. While a client-server model depends on a central server to fulfill the requests of users, the P2P model works independently. The peer-to-peer model is maintained by a distributed network of computers from different regions.

Instead of using a central server to store the data, the nodes would have their hard drives to store and process the complete data of the network. Each node would have common capabilities to transmit and receive the files, which make the whole P2P network faster and efficient to process the data. The nodes act as both the server and the client. Unlike traditional networks, a P2P network is highly secure as it eliminates a single point of failure.

The inception of Bitcoin

Around thirteen years ago, an anonymous person or a group of people using the name “Satoshi Nakamoto” developed Bitcoin intending to eliminate all the drawbacks of fiat currency. Nakamoto published a whitepaper named “A Peer-to-Peer Electronic Cash System – Bitcoin” in October 2008 as a response to the great financial crisis and the dependence of people on banks and financial intermediaries.

As the name of its whitepaper suggests, Bitcoin was created to enable borderless P2P transactions of value, eliminating third-party institutions. Having gathered a wide user base and acquiring a significant amount of market capitalization, Bitcoin has come a long way since its inception. However, the fact that its utility has deviated from the intention and vision of its creator is noteworthy.

Because of the large user base, more transactions take place on the Bitcoin network daily. This results in network congestion, which causes the transactions to move slowly. Transactions would have to wait in line to be accepted and executed by the network. Users need to pay higher transaction fees as it will likely execute the transactions faster by providing more incentive to miners.

Meanwhile, Bitcoin has found another interesting service as a store of value. It is often referred to as “digital gold”; many Bitcoin enthusiasts have echoed the idea. One of the most strong arguments to prove Bitcoin is a store of value is its scarcity. Bitcoin’s supply was predefined by its creator and limited to 21 million coins by halving the number of bitcoins mined for every four years. While volatility makes it unworthy of being a store of value, the massive increase in its price over the years surely makes the users believe that it can be a separate asset class like gold.

Buying and HODLing the Bitcoin has become an agenda of Bitcoin enthusiasts as there is a high possibility of increasing their profits in the long term. The strategy of holding the asset for a long time ignoring the short-term volatility has led to perceiving Bitcoin as a store of value. Despite the pros and cons of treating it as digital gold, Bitcoin surely has chosen a path different from allowing peer-to-peer transactions.

As the idea of eliminating banks, financial institutions, and all the third parties to enable transactions is solid and worthy of consideration, the need for coming up with more innovative projects has risen.

We will discuss a few innovative peer-to-peer exchange networks in the following sections.

Qtum: The Best of Bitcoin and Ethereum

Qtum is an open-source, public blockchain platform that focuses on bringing out the best from the world’s top two largest cryptocurrency networks by market capitalization – Bitcoin and Ethereum. Both networks have their unique advantages, such as Bitcoin allowing the peer-to-peer exchange of value in a highly secured way, and Ethereum provides extra functionality by allowing developers to build decentralized applications. Qtum is an innovative hybrid blockchain that uses Bitcoin’s UTXO (unspent transaction output) transaction model while providing the flexibility of smart contracts.

In addition to using Bitcoin’s transaction model and allowing developers to build applications, Qtum runs on a proof-of-stake consensus mechanism which is an energy-intensive and cost-effective model when compared to a proof-of-work mechanism. By combining the UTXO transaction model with an additional layer interface to the Ethereum Virtual Machine (EVM), Qtum became the first-ever UTXO-based smart contract platform.

Qtum bridges the gap between the transaction model and EVM with its most defining feature, called the Account Abstraction Layer (AAL). As a result, developers can leverage the most powerful smart contract capabilities to build decentralized applications. Qtum is a unique platform with developed features while allowing peer-to-peer network benefits.

Envision is the new-age peer-to-peer exchange that facilitates buying and selling of stock media content without any central authority. The platform connects content creators and buyers, which allows them to sell the media directly to the consumer. This way, the platform helps creators and buyers in avoiding massive charges.

Envision gives power back to the creators by allowing them to price their own content. Creators like photographers and videographers upload the content directly on the content marketplace of Envision through the creators portal. By bringing the blockchain technology benefits like P2P exchange to a creative space like the stock media market, Envision Coin solves various issues in buying and selling creative content.

Considering the significance of P2P networks, more and more innovative projects are being developed by overcoming the difficulties and issues of the present structures. Even though Bitcoin was developed as a means of exchange, it has been gradually turned into a store of value over the years. We are likely to witness more efficient P2P platforms like Qtum with advanced features in the coming years.