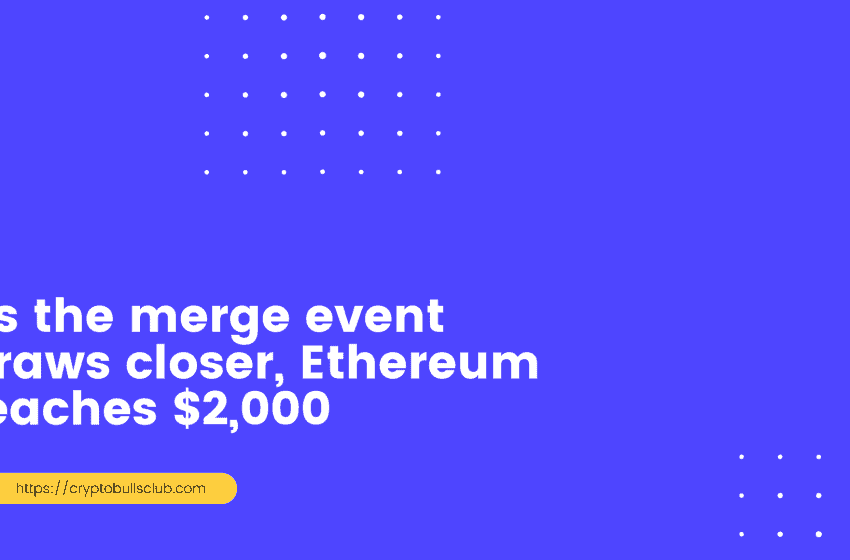 For the first time since May, Ethereum recovered the $2,000 barrier late on Friday night . Ethereum is continuing its bull run. In terms of market valuation, the second-placed cryptocurrency at the moment of writing had increased to $2,024; this represented gains of 7% from the day before and 17% from the week before. The past month has seen a roughly doubling of it.

On August 13, ETH/BTC passed 0.08 BTC by overcoming a significant barrier. Because the area around 0.075 marked a troublesome selling zone that already had kept bulls at bay since January, the change is noteworthy for Ethereum, the biggest altcoin. Since traders are unsure of how long the strength will last, ETH/BTC is currently trying to retain the recently attained level.

Relative Strength Index, which has risen beyond 70, may be a red flag. Ethereum will probably stop performing if it performs like it did in November 2021 and April 2022, either by touching or even before hitting the resistance zone. It is reasonable to anticipate that $1700–1800 will be retested in this situation.

What is ETH being pumped by?

The merge is the central focus. The testnet completed the transition to POS mining early in the week, functioning as the penultimate practice run just before mainnet merge, which is currently slated to occur on September 15 or 16.

A testnet is a version of Ethereum that is still in development and allows for testing before the main network goes live. In order to increase overall network efficiency and utilize up to 99% less power, the Ethereum mainnet will migrate from a POW method that uses a large amount of power to a POS consensus method. The upgrade is projected to lower Ethereum’s high transaction rates, even though some users don’t believe the post-merge Ethereum will look quite as nice as some of the network’s key developers have promised.

In the current environment, experts have noticed a growing trend among investors to increase their exposure to risk. As investors switched their money from bitcoin to altcoins in a less risky environment, part of bitcoin’s force weakened. In its weekly marketplace update to users of the Telegram channel, experts emphasized the need for care in a market for cryptocurrencies that is growing.