10 Cool Things About NFT You Need to Know 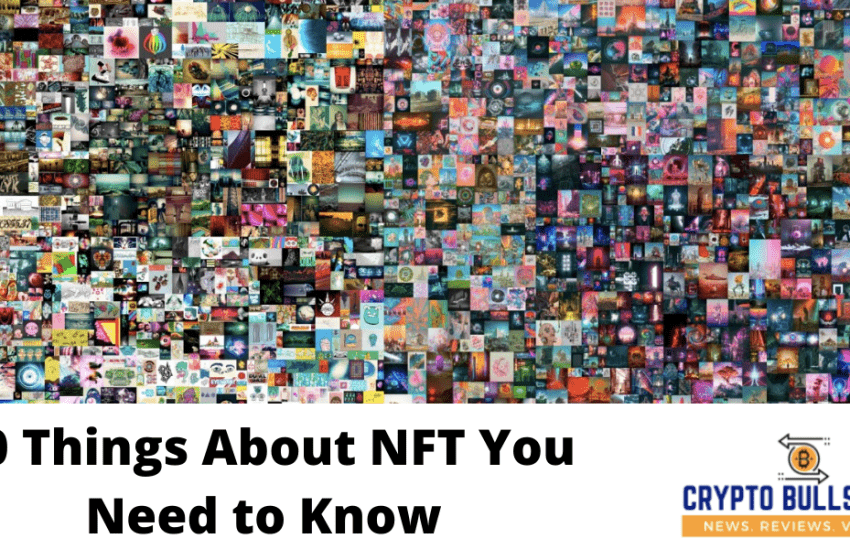 Many individuals still have misconceptions regarding NFTs and also cryptocurrencies in general. Non-fungible tokens (NFTs) have changed the way people think regarding virtual assets by making their ownership and also sale lawful. For several artists and also collectors, NFTs are the way of the future, providing financial freedom and also investment opportunities.

NFTs, or non-fungible tokens, are blockchain-backed digital-only collector items. When it comes to NFTs, the entire procedure can appear to be difficult. It’s actually a lot easier to grasp than you might imagine! Before you actually invest inside the NFT market, here are ten things to keep in mind.

What exactly are NFTs?

NFTs (non-fungible tokens) are one-of-a-kind crypto assets. They cannot be exchanged for just another token of the same value, unlike cryptocurrencies. NFTs are being used to signify ownership of digital artwork or valuables and are authenticated using the blockchain. The owner may buy them as they like the item, believe that it’s a smart investment, or would like to add to their social status. NFTs have worth since a large section of the population believe they do, just as real-world pieces of art or collections like baseball cards or comic books.

Here are the 10 things about NFT you need to know:

1. Anything digital can become an NFT with the help of smart contracts.

Anything digital has the potential to become an NFT. Although the majority of the attention is focused on the sale of digital art as well as collectibles, the technology’s versatility allows nearly everything to be tokenized. Domain names, in-game assets, tweets, songs, as well as movies, to mention a few, could all be linked to a smart contract to produce ownership proof.

2. The Major Blockchain That Supports NFTs is Ethereum

Although we have Solana NFTs making a huge roar in 2021, Ethereum is still the #1 blockchain for NFTs.  Ethereum supports a lot of NFT collections and allows their sale through multiple online auctions, with such an emphasis on confirming holdings using proof of stake procedures.

Ethereum, a blockchain technology renowned for its security as well as protection, allows for safe and stable transactions that really are free of fraud or third-party interference, making it the ideal platform for supporting NFTs.

3. NFTs assist artists in reaching out to potential consumers.

NFTs, considered as the “new disruptor” of the art industry, are making headlines in a field formerly dominated by traditional investors. Artists like Trevor Jones as well as Fewocious are now being brought together along with investors seeking for another huge thing through marketplaces including OpenSea, Nifty Gateway, as well as SuperRare. The industry is bursting at the seams, has over 1.4 million everyday unique users including over total sales volume is $165,348 as of December 30, 2021. On Opensea platform, 20 B USD in NFT that were sold in the year 2021.

4. Investment in NFTs can be quite profitable, but remember they are illiquid

Traders are flocking towards the NFT industry to partake inside the virtual discovery of goldBuyers are frantic not even to lose out on another big thing, including NFTs such as Cryptopunk #7523 increasing its price by 71,000 % in just just few months, between 1646 to 11.8 M USD.  So because business is still in its early stages, there are also several chances to engage. In June 2021, for example, the generated artwork Fidenza #313 being auctioned for 1,400 USD. Following month, it must have been reauctioned for 3.3 M USD.  CryptoPunk #4156 must have been traded for 2500 Ethereum during December 2021, world’s third largest CryptoPunk transaction worldwide.

5. According to Google Trends, ‘NFT’ is currently more popular than ‘crypto’.

According to Google Trends, interest in NFTs is overtaking interest in cryptocurrencies. According to the most recent Google Trends data, interest in the search phrase ‘NFT’ has surged. The drop in popularity of the crypto word could be largely due to the fact that now the price of Bitcoin has remained stable for some period. The NFT market, on the other hand, is in a good place. As a result, it’s only natural that interest keeps going up.

Additional reason is that the term NFT is just now growing rapidly. As a result, numerous newcomers look up the term on Google. 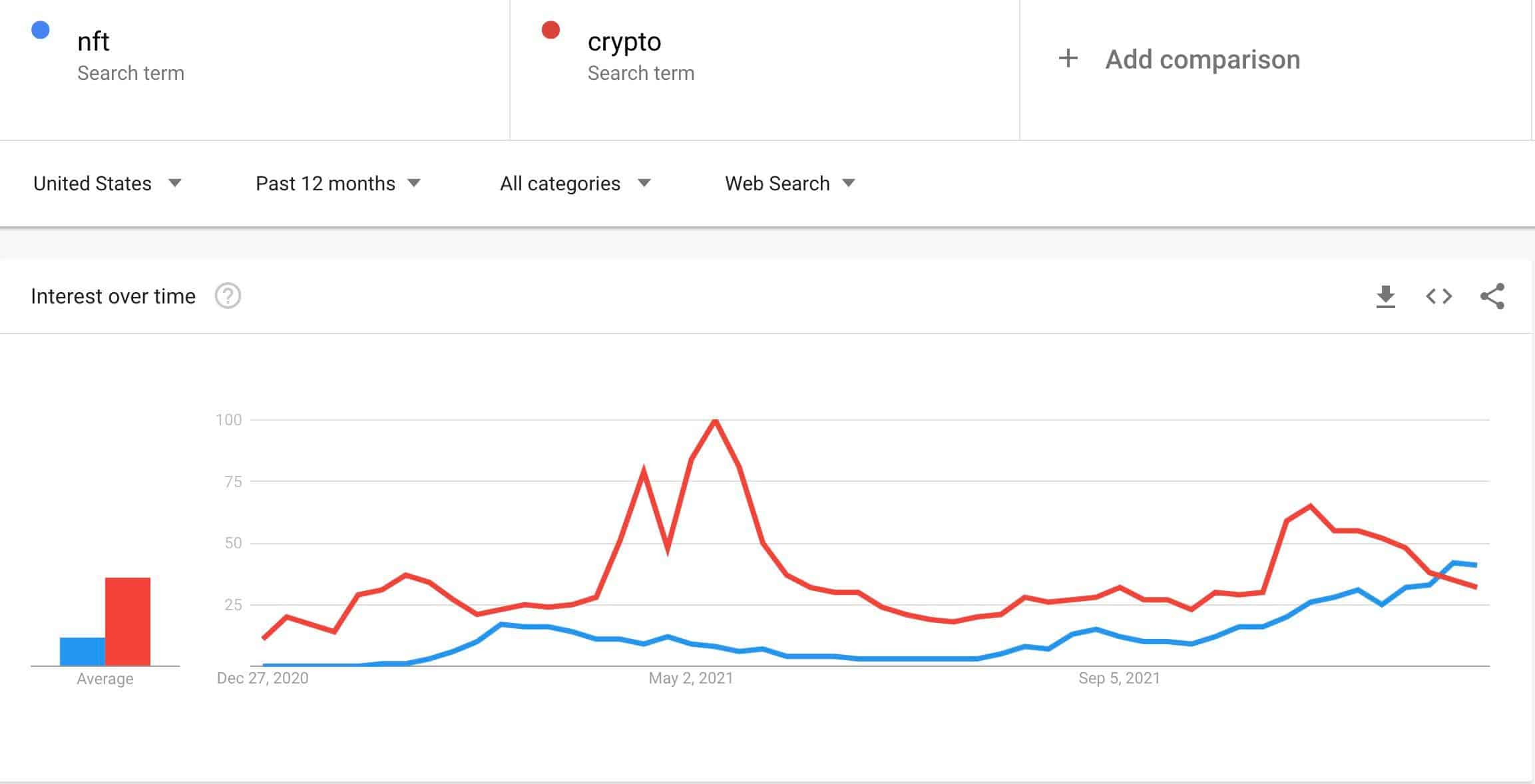 6. The first mainstream NFT projects were Cryptopunks as well as Cryptokitties

CryptoPunks as well as CryptoKitties, both launched in June 2017 as well as November 2017, were the first NFT initiatives to achieve public success. Both projects used Ethereum and also were the first to adopt the ERC-721 token standard for non-fungible tokens.

7. The market for digital land NFTs is expanding.

Decentraland aswell as the Sandbox are digital realms that are moving ahead towards digital real estate. These platforms leverage NFTs to let users not only to occupy as well as engage with virtual environments, but also to purchase, sell, and now own land within them, which they can expand as they see appropriate. The market is about to blow up, with plot sales now exceeding $1 million.

8. Solana is a NFT Competitor that competes with Ethereum.

Solana has emerged as a blockchain to explore, with the potential to threaten Ethereum’s dominance. Several blockchains have incorporated NFT technology, but they have mostly relied on Ethereum. Solana’s NFT tokens would be native to its blockchain, with cheaper gas fees and quicker transactions, and Solana has got a lot of volume.

9. NFTs could be utilized as a collateral

NFTs could then be used as collateral kudos to dApps such as NFTfi. NFTs could be used to borrow crypto in DeFi apps or held to make loans on due to the interoperability of Ethereum’s tokens. This company enables the owners of NFT to sell their collectibles and earn a profit.

NFT admirer and Twitter co-founder Jack Dorsey traded its debut Twitter post as an NFT worth 2.9 M USD in the month of March 2021. The NFT reportedly bought by the CEO of Bridge Oracle, Sina Estavi, after a frenetic price competition just on V.Cent.co platform, who still bought on Musk ‘s post on tweeter. NFTs enable the archiving of web history, including such Dorsey’s Twitter post, with both the proceeds benefiting welfare dependency charities.

What is NFT and Why NFTs matter?

If you would like to learn about what is NFT, and why NFTs matter, you can check this video

Because NFTs are new, it may well be worthwhile to spend small amounts to test them out for the time being. Investing in NFTs, in other words, is essentially a personal choice. If you have some additional money, it’s something to think about, especially if the artwork has sentimental value for you.

Take into account, though, that maybe an NFT’s worth is purely decided according to what somebody is willing and able to pay for that though. As a consequence, need will push prices rather than basic, technological, or economic factors, which generally influence share prices therefore, should at the least, provide the foundation for investment opportunities.

Alerting: Because of this, you might be tempted to resale an NFT much less than you paid for it. You may have not been able to buy and sell it even if nobody really purchases it.

Do your own research, be aware of the hazards (including the possibility of losing all of your money), then proceed cautiously if you choose to jump right.