WOW (World of Women) and WOWG NFTs: Everything You Need to Now 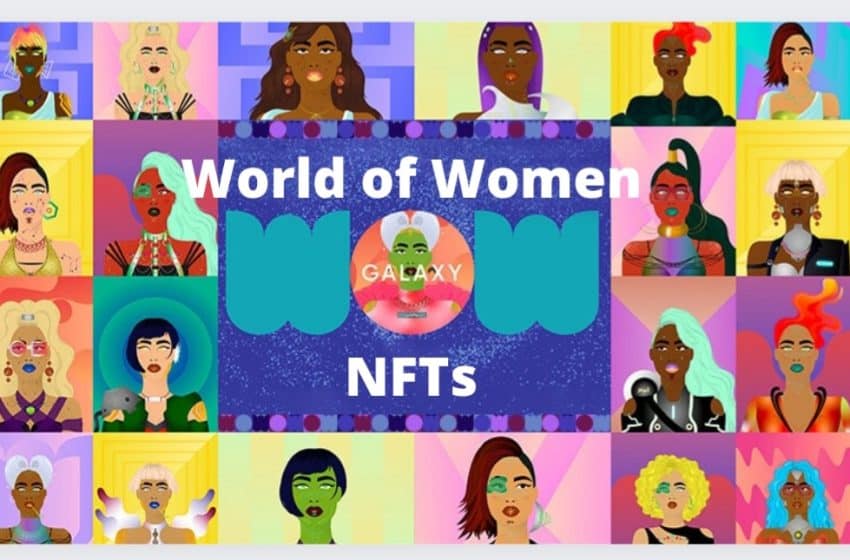 WoW sold out within three days after being launched with 14 million dollars in primary sales?

WoW ranked 11th in the NFT scene by floor cap?

In recent news, WoW, or rather WoWG has been featured time and again. While many are aware of what WoW is, you might not be.

So in this article, in very simple terms we have tried to explain WoW, how it works and what is making it so popular in the present Scenario.

What is Wow NFT?

The WoW or the World of Women NFT was released back in 2021 with a collection of digital images, that is, the virtual arts in the collection all depicted women from different sectors of society.

This year too, the project has launched its second collection of World of Women Galaxy NFTs in April 2022.

The way the arts are portrayed includes images of white women, women of color, women of fashion, women with different colored hair, different eye features, women represented simply, women of fashion- it is all a testament to the project’s aim of creating something that has the potential of being an all-inclusive community and the representation is as broad as possible.

With an abundance of variety portrayed and it being an all-women art collection, this project also aims to be a community celebrating equal representation and equal opportunities for all.

This project basically aims to ensure that in the world of NFTS, women have equal and fair opportunities.

Their vision is of building a web3 through the community and the collections that are inclusive.

They perhaps intend to alter the report back in November 2021 that revealed there are around only 5% NFT women artists. This project and its collections aim to create a space for the underrepresented; it can be a niche for women in a male-dominated field. 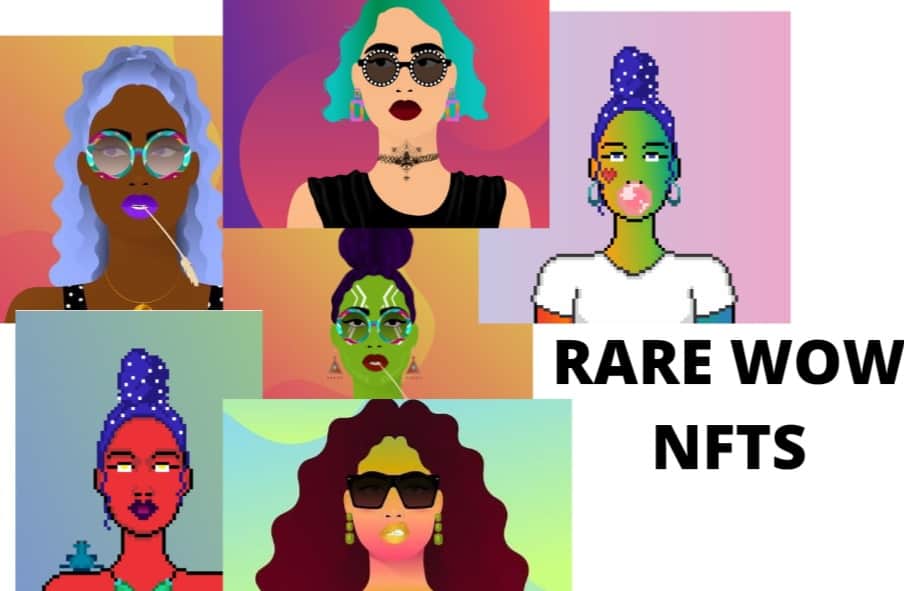 It intends to bridge the gap between the virtual NFT world and the real world by being a space for community representation.

After their signature release of NFTs in July last year, they announced the second release in 2022, which has already been released.

The Team is calling the new collection, the World Of Women Galaxy-NFT Collection.

This collection is more diverse and has included more variations of portrayals of women.

The Team has a new mission of donating the royalties to new charitable causes. Also some Tokens are to be kept aside for the World Of Women DAO project.

This time the WoW owners are scheduled to reward the original WOW NFT holders, where they will be allowed to mint a new WOW Galaxy NFT.

The WoW project was started by Yam Karkei. She was joined by three others, who together were the founders of the WoW Project.

This team has grown into a nine membered team with artists, designers, community managers, etc.

How Many WoW NFTs are there?

There are 10,000 unique pieces of WoW NFTs that have been generated from 200 assets that Karkei herself drew by hand.

These are brought together by an algorithmic code.

The new World of Women Galaxy is featured more artwork by Yam Karkei herself.

The original WoW holders were eligible for free NFT airdrops. So they were airdropped 10k WOWG NFTs.

The WoWG holders own the artwork as well as all of its intellectual properties.

The digital assets are randomly generated rarity arts that are placed in the Ethereum blockchain as ERC-721 tokens.

And thus these NFTs can only be purchased with Ether (ETH).

Presently the floor price of WoW NFTs is 6.79 ETH.

There are around 5400 owners and the volume traded ranges somewhere from 66.6K ETH. 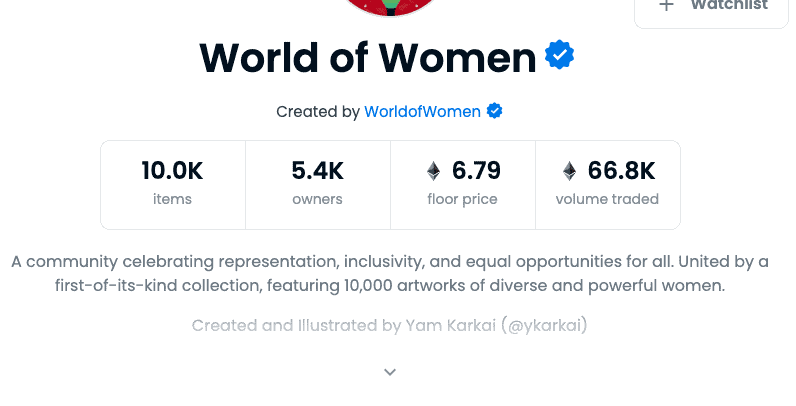 Floor price of WOW G NFTs is just below 1 ETH and more than 26.5k ETH is already traded. There are more than 11.2K owners. 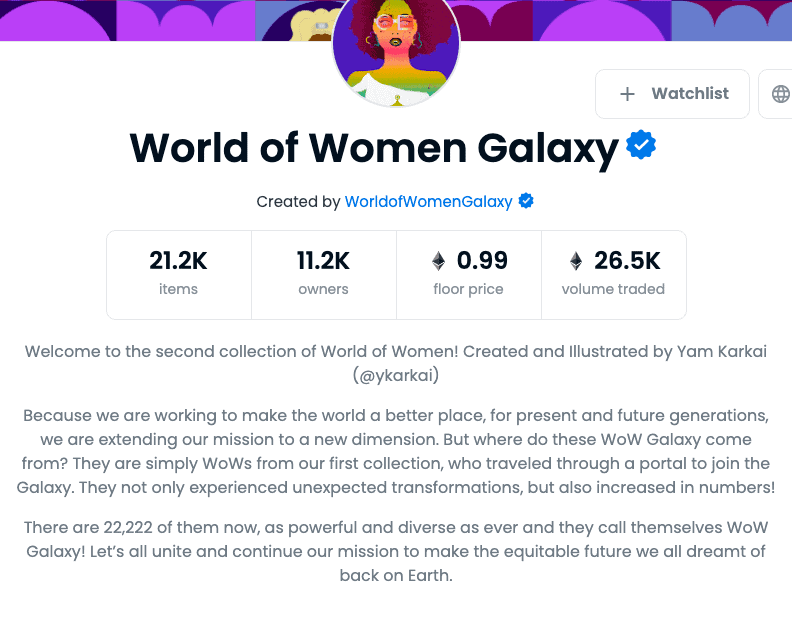 How To Collect My Own WoWG NFT?

There are several ways through which you can become eligible to own your own WoWG token:

One way is for you to participate in events of giveaways by the partnered communities. That means that as WoW is partnering itself with many other communities, you as an interested holder can use it.

You can also start some direct interaction with the WoW team, showing your interest and faith in the community and what it represents. You can get in touch with them on their social media. This can be quite effective because the team is always in look for diligent supporters like yourself.

You can’t claim WOWG NFTs if you are not a WOW NFT holder.

Else, you can buy WOWG NFTs from Opensea.

What Makes WoW NFTs so popular?

The reason for WoW being so popular today where people are actually going for the second collectibles can be the novelty of the entire concept.

The tech, the code, and the methods might have been the same old, but the concept around which they were placed was new.

And drew a lot of people to it.

The WOW community is very strong.

The motto of inclusion, diversity, and representation all are very common and relatable issues in modern society.

So that too has helped build a community where people would actually want to be a part of such a thing!

And this is how even the real world gets incorporated into the virtual one. The community with similar interests and talents has space for representation.

WoW has also signed a partnership with Ryse Witherspoon, Hello Sunshine and attempts to bring its vision to the forefront. Future scripting for films or series can also be expected.

The WoW Foundation has purchased some lands on the Sandbox game. It also has received a grant of 25 million USD from it.

WOW Foundation will get 10% of primary sales and 25% from royalties. With this, they have broad plans for women inside the metaverse. And one of the first plans is to launch 10000 3d avatars of women.

The WoW Foundation already got a 25M grant from @TheSandboxGame. It will now also get 10% of primary sales & 25% of revenues from our royalties from #WoWGalaxy! 🔥

Our plans?🔭
To lead and support women in the metaverse; through education, mentorship, charity initiatives & more! 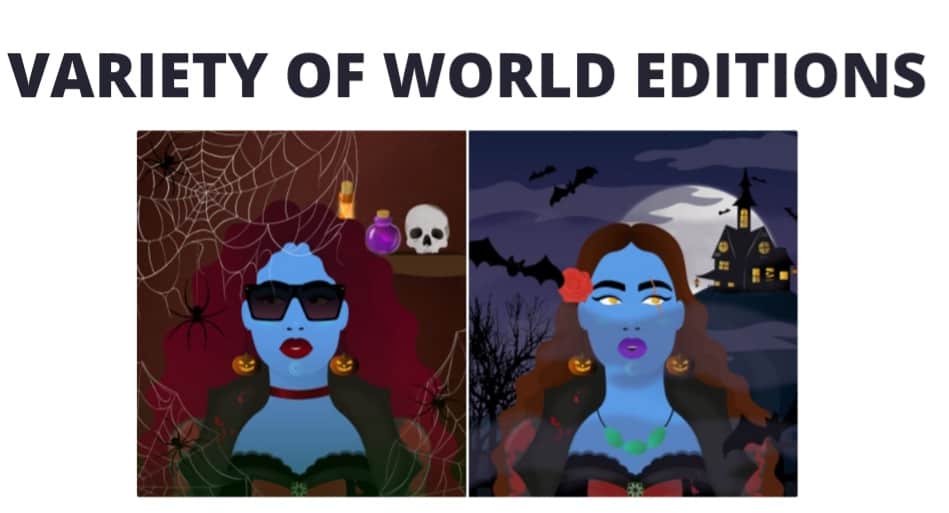 Other launches of WoW NFTs include the WoW museum in an attempt to show support to other artists.

The WoW University will attempt to bring the uninitiated on board with Web3.0 space.

The WoW Academy will provide a space for artists to act as incubators, advisors mentors, and fund donations.

Apart from charity and DAO, the WoW NFTs or basically the project is aiming to go to other lengths too. By this I mean, the celebrity with this project is something to be reckoned with.

The popularity of the project is evident as we saw in February KPMG Canada bought a WOW NFT for 25 ETH.

Then again in March another NFT from WoW was auctioned off for 260 ETH or 755000 dollars!

The question of is WoW NFTs a safe bet for investment does not have a proper answer. Because like any form of digital asset, NFTs too is a volatile market. Now to avail of all the perks associated with the WoW Project one can definitely choose to be a holder. Looking at the impeccable community behind and around the project is alluring too.

And as the manifesto of the WoW NFT project has claimed to aim toward “balanced representation in the NFT space” along with pushing it forward to “support causes” that are precious. Such powerful one-liners in a project’s manifesto are bound to attract attention and garner investors.

In conclusion, we would like to say that WoW really has a unique appeal, especially for a particular community and thus it does seem to have a promising future. But as we always say that our article should be treated as financial advice. It is just some personal opinions expressed. For the right technical knowledge on such speculative earnings, consult a professional financial advisor and do your own diligent research.

Hope this article was helpful enough!

Want to learn about another BlueChip NFT Collection? Click here