Why Should India Not Ban Cryptocurrencies? 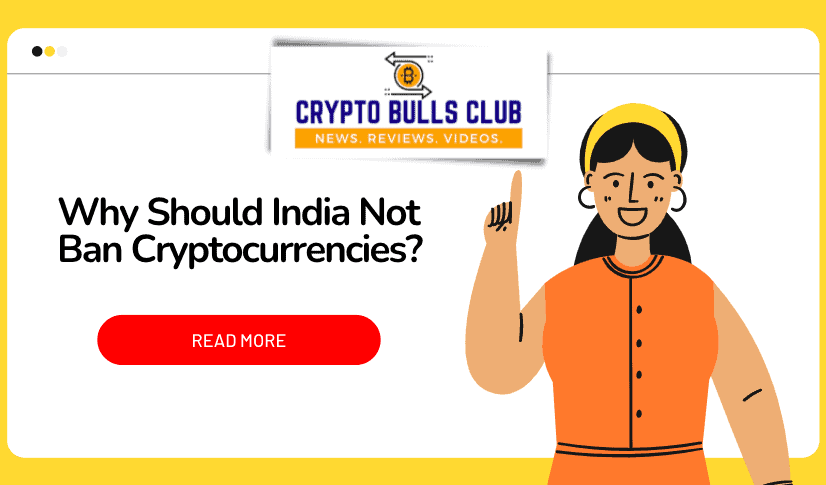 After RBI’s desperate attempt to strike down Cryptocurrencies in India in 2018, with repeated injunctions about risks and the overall volatility of Crypto, the Supreme Court’s decision in 2020 finally struck down the ban imposed. While our old-school minds still adjust to this new world of currency, let us weigh our pros and cons, and give a subtle closure to the question; Why Should India Not Ban Cryptocurrencies?

After the 2018 ban, if the Indian Government decides to repeat the currency control move again this time, the backlash on the Indian Economy might be much worse than anticipated. One of the main drawbacks this might have on the general demographic and investors is the stunted growth in the cryptocurrency sector.  If the Indian government imposes the bruited cryptocurrency ban in 2021, it might have an adverse effect on the economy. An obsolete ban on crypto might create a parallel economy leading to illicit use due to unmonitored exchange which again brings us back to square one. Also, this is one of the main concerns of the authorities that they are unable to monitor the value and track the exchange. This concern regarding the tokens arises mainly due to a lack of awareness and exposure to these digital currencies.

Now, to briefly break this down, cryptocurrencies are based on blockchain technology. In Layman’s language, there is a public record of each and every transaction which minimizes the security factor. To bring this whole situation to a common ground, instead of a complete ban on cryptocurrency, the government could regulate this form of the economy with strict KYC regulations for better tracking and security.

To state stats, despite the rumors on the upcoming ban in India, the crypto transactions are multiplying multifold every month, and according to Reuters, 8 Million investors now hold about 100 billion rupees. Although the “Fear of the Unknown” drives the majority of the demographic, the factor of accessibility, mobility, and low transaction rates continue to be a safe haven for investors.

With this rumored ban, the government is not only putting a ban on digital currency, but it is also going to penalize any trader. This bill criminalizes “possession, mining, trading, and transferring crypto assets.” This would take a huge toll on the traders, as a lot of deals are based on crypto transfer. For example, the most recent Flipkart and Walmart trade was known to be done over cryptocurrencies. Investors and entrepreneurs are also in a state of limbo. Since this nationwide ban is not going to affect foreign investors, after the ban many of the Indian crypto investors and entrepreneurs are going to move abroad. Basically, we’re going to move the millions of crypto volume out of the nation and into a silver platter to the international exchanges.

Post-covid there has been an exponential growth in the technology and the adaption to it. Numerous budding entrepreneurs and blockchain startups are being fueled by cryptocurrencies. Several blockchain-based products might be just stuck to being mere ideas on paper. The potential jobs, revenues, and new projects on the blockchain are heavily dependant on the basics of cryptocurrency.

The current demographics investing in cryptocurrencies are in millions, and this bill is going to be affecting crypto traders and entrepreneurs. WazirX has estimated an amount of $21.8 Billion transferred by over 7.3 Million users. For a more detailed Marketplace Review on WazirX NFT, click here! CoinDCX has over 4 Million active users. CoinSwitch has estimated a 7 Million monthly transaction value of Rupees. 15,318 Crores.

There are crypto companies that have placed themselves in the community by becoming a unicorn. Matic, an Indian cryptocurrency company has a current market capitalization of 1,292,270,091 USD.  In fact, the Maharashtrian Government has joined hands with Print2Block and Polygon’s Matic Network to issue COVID-19 Certification. The Government certifies patients registered with a viral disease on testing negative. Matic’s use cases are pretty extensive.

CoinDCX is another such unicorn that has received the latest funding of $1.1 billion. Even with the rumored ban around, CEO Sumit Gupta believes that the use and trade of crypto will be regulated and it will serve as an effective wealth generation technology for us.

Nischal Shetty, the CEO, and co-founder of WazirX has been tweeting every day, for more than 1000 days now in the favor of regulated crypto with the tag #IndiaWantsCrypto. He aims on spreading knowledge and the right information on crypto.

Dr. Balaji S. Srinivasan, Investor & Entrepreneur at Moneycontrol Masterclass had stated that while India is venturing out into various digital domains like UPI and Aadhar, it would be a trillion-dollar decision if they decide either way on executing the ban on cryptocurrencies. If they bring about harsh regulations with this bill, we’ll be risking trillions worth of crypto.

Lastly, from a business point of view, the ban on cryptocurrencies would result in mass unemployment and loss of revenue.  Indian blockchain startups would be rendered unfunded and ultimately cease. A ban on crypto might ultimately channel into illicit means triggering a black market trading of crypto, considering cryptocurrency is a digital model of the economy, it can be transferred as easily as a document over the internet. Thus, regulating crypto transactions might be a better option to avoid parallel economies. In fact, the Internet and Mobile Association of India (IAMAI) have appealed to the Indian Government, to not impose a nationwide complete ban on cryptocurrency, and instead regulate the trading. Also according to IAMAI, almost 10 Million Indian Crypto Investors are going to get affected by this bill, thus giving a generalized answer to the question Why Should India Not Ban Cryptocurrencies.