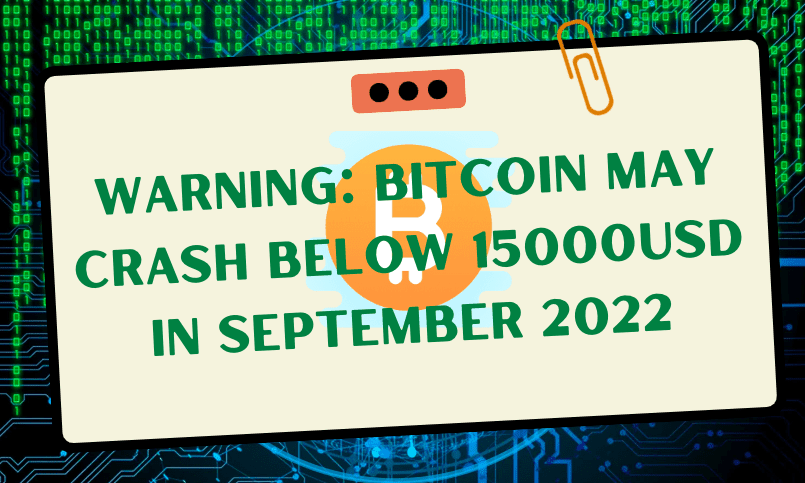 Bitcoin has historically been on a downtrend in most of the September. Only twice in history, BTC ended up in Green. If history is to be repeated, BTC could also end up in red, in 2022. And in crypto many a times things repeated in cycles. Nothing has changed, and I do not think it will also change in the near future.

Based on historical Bitcoin monthly returns. Throughout history, every September Bitcoin always gets negative returns. Only 2x green, namely in September 2015 and September 2016 pic.twitter.com/tp1c2swBbv

The same history of 2018 is seen to be repeating in 2022, and we are now in September. Next few months could be in red, and my prediction says Bitcoin could fall below 15000USD this month.

Ethereum Merge is nearing, and is due to happen in September, 2022. Even ETH chart suggests we could be in for a long bear market.

Wise Advice, an Indian based Crypto Youtuber suggests 19500 USD as a crucial support for Bitcoin, and if it breaks Bitcoin could be headed to 17500USD. He thinks we could see a pump in Ethereum in the first week, followed by first few days of the second week, from which there could be a downfall. By then, BTC could break 20700 USD mark, and from 21700-20000 USD region, BTC could again be heading South. He predicts BTC could head towards 12000 USD by November, 2022. It is better not to trade post September 2022.

It is important for us to follow the Mt.Gox Bitcoin release event too. Though the release date is not yet announced, 15th September, 2022 is the last date to submit your wallet addresses if you have lost any of your Bitcoin during the Mt.Gox hack back in 2012.

Once this is done, the release date could be announced. Bitcoin release will happen in parts, and which is why I think the bear market is going to be a long one.

In some other news, we have seen Michael Saylor quitting as CEO of Microstrategy after investing Billions of dollars in Bitcoin, which is currently trading in losses. He now holds the position of Executive Chairman of Microstrategy. If BTC goes further down, Saylor and Microstrategy as a whole could be in a very bad position which may force the entity to sell some of their holding which may bring further crash in the market.

So what should you as an investor do? DYOR but do not sit idle on your gains. Keep your eyes open. I could be selling some of my portfolio and may later re-enter once the BTC drops below 15,000 USD. I do not see any positive news in the future which could take the price back up anytime soon.

Do not forget, there is a global recession all around.