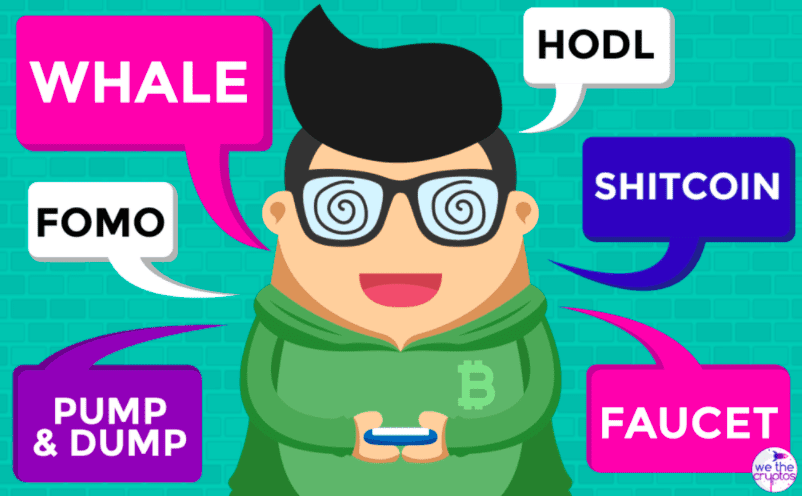 Crypto slangs are quite common in this industry, and they are everywhere. Cryptocurrency is in vogue, no matter the price fluctuations. If you are brand new to world of crypto, these terms will help you blend in. Among the many existing slangs, below are the most commonly used terms in order to swoop into the blockchain world!

Among the most common crypto slang is ‘HODL’, which stands for ‘Hold On For Dear Life’,  and in crypto terms means clinging on to your crypto for the long term and paying no heed to the short term price activity. People who HODL are called ‘HODLers’ and some of them aspire to hold on to their crypto until a single native coin is worth millions of dollars. Other HODLers aim to hold on to cryptocurrency until it becomes the newly accepted financial standard with BTC as a worldwide store value. On the contrary, people who can’t stand the huge fluctuations and sell their crypto instead are known to as ‘weak hands’. Mostly these are retail investors.

‘FOMO’ stands for ‘Fear Of Missing Out’. Pertaining to crypto, FOMO is what you feel when you see the price of a coin you don’t possess pushing past new records. Intriguingly enough, FOMO is practically a kind of social anxiety which was identified 25 years ago by Dr. Dan Herman. It wasn’t until 2004 that the phrase FOMO was devised by the author Patrick J. McGinnis who at a subsequent time brought it into vogue in an op-ed he printed while studying at the Harvard Kennedy Business School.

The antithesis of FOMO, ‘FUD’ means ‘Fear, Uncertainty and Doubt’. It’s what one goes through when the crypto market crashes or sees viral news about how crypto is by and large, six feet under. It is not a form of social anxiety but rather a publicity strategy used essentially in marketing and sales. People who put about ‘FUD’ are called ‘fudsters’, and this notion has existed since the late 1600s but became widely known in the 1970s.

One becomes a ‘Hopium’ addict when he or she has incorrect beliefs about a crypto and gets dependent on false aspirations. This term was first coined by the author Tyler Durden in an article in December 2010 when he stated the abrupt turn in Goldman Sach’s prophesy for the American financial system from bearish to bullish. According to him, this prediction was based off of ‘Hopium’.

DeFi, which is short for Decentralized Finance, is spreading as quick as the market cap of cryptocurrency and is probable to take over the headlines in 2021. A necessary DeFi term one must learn is yield farming, which essentially takes into account a mix of lending, borrowing, and trading across various platforms to maximize the yearly percentage yield. People who yield farm are called yield farmers.

A word as simple as moon in crypto lingo refers to when a token’s price rises drastically. Going ‘to the moon’ means when a coin is  likely to go off the charts, as if shoot up to the moon.

Whale relates to a person holding a huge amount of cryptocurrency. Referring to how big and powerful a whale is, such a person owns thousands in crypto value and is capable of influencing the market. An alternative of this term is ‘shrimp’, which is quite self explanatory, and refers to someone who owns crypto but in a small amount. A shrimp in crypto world owns less than 1 BTC.

Bagholders are among the unlucky crypto holders, who initially wanted to sell at a high price but due to the market moving too fast, they couldn’t do so and now are left with a coin that they don’t want to sell at the price in demand later. These people are ‘left with the bag’.

One of the widely used slang, pump and dumpers are people who tell others to together buy the coin and create demand in the market leading to risen prices. Then, the coins are ‘dumped’ and everyone sells. Pump and dump is assumed to be an open secret amidst many crypto traders.

Short for ‘satoshi’, sats is a phrase that is stemmed from the Bitcoin white paper’s author Satoshi Nakamoto, which refers to the minutest fraction of a Bitcoin that can be forwarded, which is 0.00000001.

Crypto slang is a very important thing to know. There are even more slangs and are very common words such as lambo and shill which have different meanings altogether in context of crypto. New lingo finds its way to the Internet day to day, and there is no need for FOMO as the world at large starts from scratch, even the most exceptional traders!