Snoop, Turning ‘Nothing Into Something’ in the NFT Art World With Generous Art Fund 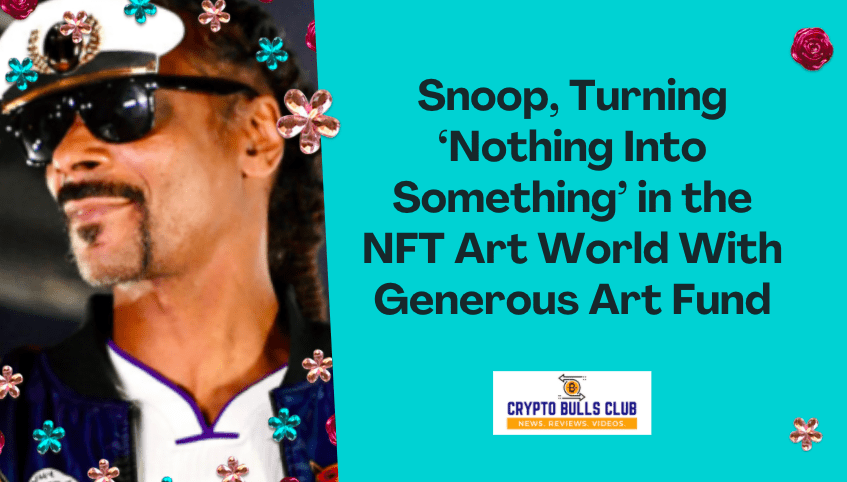 Snoop Dog, the American rapper has been flying under the radar (except for that jaw dropping Superbowl performance) and buying NFTs left, right and center. And yet, he’s been doing it in true doggy style under an alias.

Just a little while ago, Snoop, born as Calvin Broadus Jr. outed himself on Twitter under his alias Cozomo de’ Medici as the one and only Snoop Dog. Since then he has been incredibly active in the NFT art arena as a collector (and an avatar in Sandbox.)

HIs new fund, for only the most promising emerging artists will see 64.6 ETH, worth nearly $200,000, distributed on both Ethereum as well as Tezos and Solana too. The fund will “go to where the art is” and “build a Collection where fantastic new artists can be discovered and supported.”

Tezos and Solana are becoming increasingly more popular as the hub for NFTs with millions of active wallets between the two networks. Solana has had a staggering year with its token up 355%, even following the bearish market that saw it lose 55% since the start of 2022. And the Tezos protocol shot to fame as a result of its abilities to address key challenges inside the industry. Tezos was one of the original networks to use the much-lauded proof of stake model, which it had inbuilt from the start. Its energy efficiency, speed and cost effectiveness when compared with Ethereum has drawn many NFT marketplaces to host on it.

An article featured in NFT Evening talks of how an exhibition  featuring a group of popular Ethereum artists, during Frieze week in Hollywood, The Digital Roots, from ART & NFT will be running its auction component by minting on the Tezos blockchain.

The world’s of digital NFTs and art are becoming ever more closely aligned, as NFT artists can rake in thousands and sometimes millions of dollars for the pieces and the popularity of this niche is picking up momentum. For digital artists, this will help them explore and monetize their talents and propel the industry onwards.