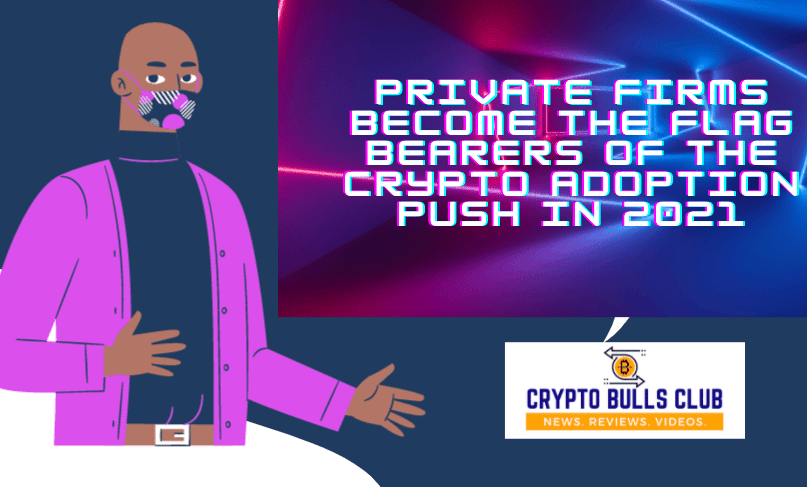 The market capitalization of cryptocurrencies stands at over $2.2 trillion, with Bitcoin (BTC) and Ethereum (ETH) accounting for roughly 60% of the total value. BTC had increased by 60%, while ETH had increased by 378% this year.

It has been a watershed moment for crypto performance and adoption. However, the acceptance and adoption of crypto is still in its early stages and is set to increase significantly in the coming years. Many private giants across industries are getting into the crypto game and rolling out their version of crypto services. In 2021, the crypto-verse experienced several adoptions by tech giants; below are some of the most significant and impactful developments of the year to date.

MercadoLibre expanded its roots into the crypto realm, allowing users of MercadoPago in Brazil to be able to purchase, trade, and store cryptocurrencies using their digital wallets. It is one of the largest Latin American firms that is seeking to diversify its financial offerings.

MercadoLibre was established in 2003 as a fintech solution that gradually expanded its services from a wallet, payment mechanism, credit for customers and sellers to insurance services. The platform reported an overall payment volume of $20.9 billion in Q3 2021, up by 44% from the same period last year. It has since become Latin America’s largest e-commerce company by market value.

According to Tulio Oliveira, MercadoPago vice president, the option was made accessible to a selected number of clients earlier in November, and there are plans to expand in the following weeks. The goal is to replicate the product in other Latin American regions, allowing users to use cryptocurrency to pay directly for things purchased on MercadoLibre. The corporation had already established a roadmap for crypto adoption.

In May 2021, MercadoLibre revealed that its treasury had acquired $7.8 million in BTC. Moreover, Marcos Galperin, its co-founder, and CEO has been vocal about the possibilities of opportunities around cryptocurrency since early 2021.

On Nov. 23, the e-commerce giant announced that the firm would allow crypto investments and related transactions through its digital wallet. This move will push the adoption of crypto in Brazil to further heights. More recently, it was revealed that the company would be integrating with the blockchain infrastructure of Paxos to enable crypto transactions for its customers starting in December this year.

Amazon stoked suspicion when it was preparing to embrace Bitcoin by purchasing several crypto-related domain names back in 2017 and 2018. However, the team eventually refuted all of the claims.

In early 2021, Amazon made waves when it announced on its employment page that it was looking for employees to work on a digital currency project centered in Mexico. The project was focused on converting cash into digital money for its existing customers.

Furthermore, Amazon once again made it to the headlines when they offered a position for a “Digital Currency and Blockchain Product Lead” on their website in July 2021. According to the job description, the role involved working on payments and leading the vision for Amazon’s digital currency and blockchain future.

The job postings raised questions about whether Amazon was said to be working on digital currency. Another speculation was that Amazon might have been working on a blockchain for its supply chain, which will link with Amazon Web Services. However, there was no confirmation on this by the company, and the speculation remained just that.

Similarly, Alibaba has launched its NFT marketplace, which will allow users to trade NFTs as well as license and sell intellectual property. The NFTs will be minted on the “New Copyright Blockchain” operated by Sichuan Blockchain Association Copyright Committee.

The company will enable content creators to copyright anything and sell the rights (tokens) over the blockchain. The platform will also employ tokenization throughout the system, and the content producer, who owns a token, will be able to own the copyright.

The NFT news was a shock to the world as China aggressively banned cryptocurrencies and companies earlier this year. In fact, the company had to ban the sales of crypto mining devices and other relevant products. However, the growing interest in NFTs has pushed Alibaba to launch its own NFT platform while keeping all regulatory constraints in mind. Moreover, the company has also been selected as one of the top five to receive the first Chinese government cryptocurrency.

The Netherlands is one among the nations where there are currently no regulations prohibiting the use or exchange of crypto assets. However, they are still not widely regarded as a kind of digital currency.

Both the sanctions require that providers of crypto services must take steps to guarantee that they appropriately check, at the very least, the identities of the people or legal organizations with whom they do business in their records to comply with the penalties legislation.

Dutch National Bank (DNB) is playing a key role in the regulation of cryptocurrencies in the Netherlands. Its oversight emphasizes combating money laundering and terrorism funding. However, there are no restrictions on the usage of crypto for other purposes.

The country’s rules are so smooth that it has become a hotbed for potential crypto firms. Many businesses have emerged from the region, allowing the nation to further expand its crypto adoption.

Bistroo is one such company that is pushing the adoption of cryptocurrencies to the Netherlands. The company, which was founded in 2018, positions itself as a remedy to the predatory meal delivery businesses.

While the era of food delivery platforms has provided tremendous convenience to consumers, the startup claims that they have made life difficult for restaurants as they are paying commissions over 30% and have limited control over connecting with their clients.

As a solution, Bistroo is facilitating, rather than imposing, a robust meal delivery economy by using their own cryptocurrency (BIST), along with other cryptocurrencies like BTC, ETH, BNB, LTC, and BCH. The platform is also offering restaurants complete control over their own webshops and allowing customers to use their usage data where they can either choose to reveal their consumption patterns in return for rewards or keep them secret.

Since the platform implements a business approach that maximizes efficiency while lowering commission costs, the firm is gradually acquiring market dominance in the Netherlands. It recently secured around €8.2 million in funding. The platform also onboarded New York Pizza, adding the ‘create your own pizza’ feature to the platform.

Moreover, the Decentralized Merchant Financing of Bistroo is an exceptionally creative feature of the BIST token. This feature allows community members to support BIST token advance requests from merchants in order to assist them in receiving the funds they need to make upgrades and stabilize operations. The business and the community sign a smart contract outlining the loan agreement’s terms and conditions. Investors will earn a percentage of future sales income as well as interest over a certain period of time.

The company’s greatest strength is its protocol and community, which have been responsible for most of its development in recruiting new eateries. The incentive model has promoted greater community interaction and has resulted in more eateries being on the platform.

Bistroo, with its B2C model, is benefiting the customers and community. The platform is allowing users to pay for meals using the BIST token at lower rates compared to fiat. It is also rewarding users for being a “Bistroo Ambassador” and getting their favorite restaurants onboarded to Bistroo as a bonus feature.

Further, Bistroo is also rewarding users for rating and reviewing their orders and restaurants. Moreover, they can also earn extra rewards by staking BIST tokens. Even investing in their favorite restaurants is allowed through contributing to a BIST loan with payback and interest as the restaurant generates revenue.

Crypto has already seen a massive boom in 2021. The rise of DeFi, NFTs, and the metaverse is powering the mainstream adoption of cryptocurrencies. Although some countries have completely banned crypto, the majority of them are now realizing the true potential of these asset classes.

Moreover, as more individuals and businesses look to blockchain technology to leverage their financial transactions, it makes sense for companies to promote and facilitate the use of crypto in a transparent manner and in conjunction with existing regulatory laws in order to play a role in driving mainstream adoption.

The history of cryptocurrency reveals a lot about how important it is to the future of finance. Blockchain technology has the potential to disrupt traditional financial institutions, which now rely on a trusted third party to examine, verify, and authorize transactions. As technology advances, more industries will recognize and accept cryptocurrencies as a legitimate payment system. The future is geared towards cryptocurrencies replacing traditional financial systems.