Poly Network faces a hack of $600 million, the largest Defi hack ever 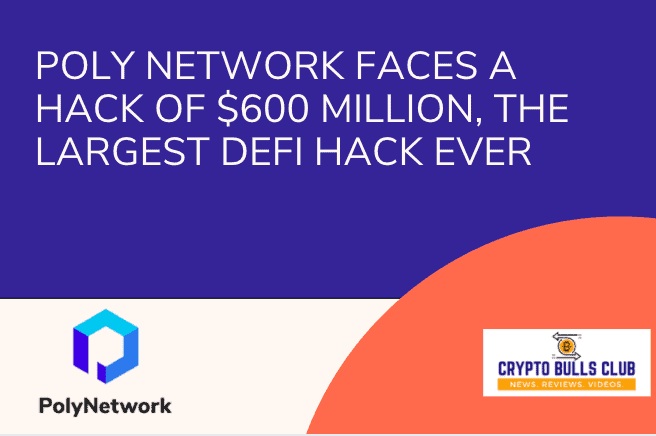 Poly Network is a decentralized financial blockchain platform suffered from a big hit on Tuesday. It reported a loot of over $600 million through its Twitter handle, the approximate estimate is around $611 million USD. This is the biggest DeFi hack recorded in the history of DeFi.

The platform claims that the robbed assets were reportedly transferred to the following blockchain addresses:

Poly Network claimed that their team has traced the stolen assets to these three addresses, and requested token issuers to blacklist any tokens stemming from the above stated addresses.

Tether’s (USDT) Chief Technology Officer (COO) Paolo Ardoino tweeted that the stablecoin company froze nearly $33 million worth of USDT tokens that were stolen in the hack.

The Security firm which is based on blockchain, SlowMist also released a statement just hours after the attack had taken place, stating that the firm has caught hold of the hacker’s email, IP address and device fingerprints, and was working on tracking additional clues related to the hacker’s identity.

An open letter from Poly Network requesting the return of the funds stated :“Dear hacker, the amount of money you have hacked is one of the biggest in DeFi history. Law enforcement in any country will regard this as a major economic crime and you will be pursued. … The money you stole are from tens of thousands of crypto community members, hence the people.

“You should talk to us to work out a solution.”

It was just last week when the Chairman of Securities and Exchange Commission, Gary Gensler asked for new regulations on digital assets such as cryptocurrency and DeFi, warning that the asset class is “rife with fraud, scams and abuses.”

The hackers, then conveyed that they have no interest on the money and may not move the coins. Hackers are also considering returning some money.