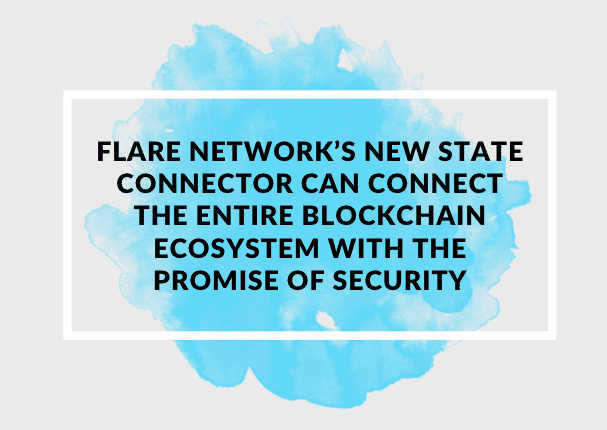 Flare Network, an innovative protocol for connecting all blockchains, with the proposition of safety at its core, has unveiled its State Connector product. This protocol gives the use case of safe transference of value and data across multiple blockchains faster and more securely than existing architectures via models such as oracles of light relay chains.

Flare Network with its State Connector, focuses on the emergence of Web 3 and the safety contained therein. It also emphasizes the ultimate state of decentralization by enacting the security of a full node, rather than the need for the network’s native token gaining value in order to ensure the protocol’s security. The current cross-chain products of today do not effectively address the issue of decentralization. In fact, the best solutions to date are centralized bridges, known as Wormholes, which render the networks and the value contained inside vulnerable to attacks and to a state of centralization, negating the true purpose of the blockchain. Additionally, centralized blockchain solutions are more open to becoming regulated, which does not fall in line with the Satoshi Standard.

Other options, such as Light Client Relays, make the architecture of the networks sluggish and complex to implement, slowing down transaction speeds and rendering a fraction of a full node’s inherent security.

The  architecture of Layer-1 Flare Network ensures that all blockchains can be connected safely, with a free flow of value and data. With its State Connector, many of the problems that arise with interoperability of different chains are addressed by Flare.  It also does not need any code changes to be made in order for integrations to take place.

The State Connector is able to trustlessly read activity on any blockchain and can verify any kind of data and then relay the information to Flare. This enhances the use cases of smart contracts and negates risks arising from oracle architecture. Products using State Connector have far reaching utility and can read in real time activities such as banking transactions, sports results, real world purchases and more. All it takes is for a third party identity system to be built and to send the data through the State Connector.

Where will this architecture lead us?

Hugo Philion, CEO and Co-founder of Flare said, “The launch of the State Connector on Flare’s canary network, Songbird, is a huge leap forward for Flare, as we accelerate towards the launch of our main network. It’s also a huge leap for the blockchain space in general, with the State Connector providing a long needed and compelling solution for secure trustless cross-chain interoperability with any chain. The most exciting part is seeing what developers will build, taking advantage of the combined power of the Flare Time Series Oracle and the State Connector to access the value, information and liquidity on multiple chains via a single deployment on Flare.”

Flare’s State Connector facilitates the transfer of data and value across all the blockchains, opening up a huge wave of liquidity and moving the blockchain one step closer to Web 3.