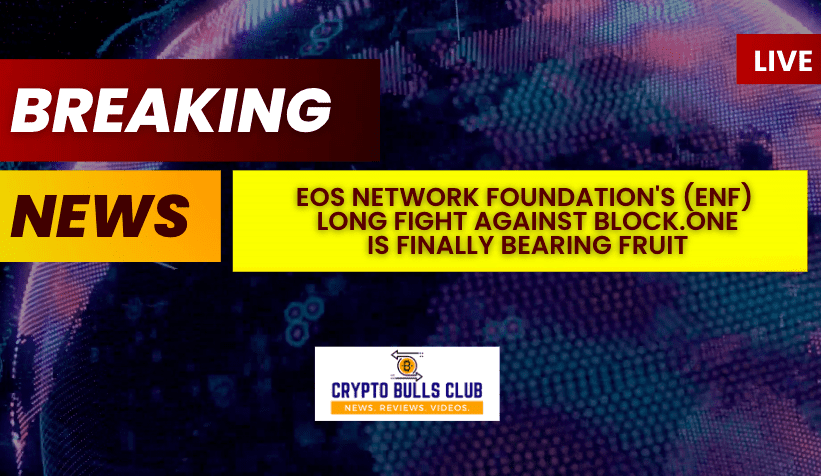 From late 2017 to early 2018,  the crypto universe saw over $20 billion dollars flow into the space in the form of initial coin offerings (ICOs) with hundreds of projects entering the space. A fifth of this figure went to one project, the EOS blockchain, making it the biggest ICO at the time. The team behind the ICO, Block.one, a Cayman Island-based company, EOS promised more efficiency than any other cryptocurrency network at the time, once it launches (in June 2018).

Nearly four years later, the project is a shell of Block.one’s promises and has witnessed a free fall. Once ranked as the fourth largest cryptocurrency, $EOS now languishes 56th on Coinmarketcap’s listings, with a $1.31 billion market cap, a 94% drop from its all-time highs. Additionally, the top developers abandoned the sinking ship, users left, decentralized apps (DApps) relocated to better blockchains, and block producers shrank in number

Despite the downfall of the blockchain in recent years, one group still firmly believes in the supremacy of EOS and is hell-bent on ensuring Block.one comes good on its promises and gives the community value for the $4 billion ICO raise. The EOS Network Foundation (ENF) is a not-for-profit organization that coordinates financial and non-financial support to encourage the growth and development of the EOS Network. Led by EOS developers that are fed up with Block.one’s silence, ENF is finally fighting back for control of the Eos blockchain and to hold the Block.one executive team is responsible for the unlawful use of the $4.2 billion raised in the year-long ICO.

Yves La Rose: “Fight is with Block.one not EOS blockchain”

Since 2020, the ENF, led by EOS community developer, Yves La Rose, have been fighting to bring to light what Block.one promised the EOS community, the mistakes they made, and how the ENF plans to bring back the EOS blockchain to its glory days. According to La Rose, the grievance is not with EOS but Block.one, which he believes has “knowingly misrepresented their capabilities” and is accountable for the project’s decline.

“And this amounts to negligence and fraud,” Yves said in a meeting of Chinese developers working on the blockchain.

Despite his efforts, Block.one remains with the $4.2 billion in ICO proceeds, spending the money with no community output and little on the development of the EOS blockchain network. Here is a short timeline of Block.one’s mistakes that pushed the EOS Network Foundation (ENF) and the EOS community to fight back and try to rebuild the blockchain.

Founded in mid-2016, Block.one came to light in 2017 when the CEO, Brendan Blumer made his pitch to join the crypto industry at a conference in New York. Since, the company has been aggressively marketing the EOS blockchain, with the team embarking on a global roadshow to raise funds via the $EOS token – in what was to be a 341-day ICO sale, raising $4.2 billion in Ethereum tokens.

While marketing was the fad for all crypto projects, Block.one’s marketing stands out as the team, from the very start, did not plan to use the ICO fund for EOS blockchain development. Speaking anonymously to Wired, a former Block.one executive said that the “aggressive EOS marketing campaign, fronted and stage-managed by co-founder Brock Pierce, Block.one did not expect to make so much money from the ICO”.

Additionally, the company’s chairman, Kokuei Yuan, continuously termed the company as a “marketing organization selling a token”, whereby they needed to put out the minimum code and software necessary to raise funds, the executive added.

As it was to be, the aggressive ICO marketing campaign got everyone excited, including American investors, which brought the ICO to the U.S. Securities and Exchanges Commission (SEC) radar. While Block.one strived to keep themselves off the courts, in 2019, the SEC charged Block.one with distributing “unregistered securities” to American investors, triggering a case that took over a year to resolve. The resulting settlement stunned the industry, which had been watching intently given the wider implications for ICOs: a $24 million fine, tiny compared with the $4 billion ICO.

Once again, Block.one was able to play the system to their liking, continuing its operations as usual. La Rose believes the squabbles with the SEC were only a distraction from the main issues surrounding the company.

“Block.one uses the SEC card as a way to distance itself [from its commitments],” La Rose says

Less than two years following the SEC settlement, Block.one was back in the spotlight, announcing the launch of Bullish,  a cryptocurrency exchange whose liquidity derived in large part from the proceeds of the EOS ICO. Registered in the Cayman Islands, Block.one planned to take the crypto exchange public via a $9 billion merger with a special purpose acquisition company (SPAC) called Far Peak Acquisition Corp on March 8, 2022. However, the merger has since been pushed to June 2022.

While all seems fine with the acquisition plans, Bullish paints a clear picture of the division between the EOS community and Block.one supporters. First, Block.one is using its prerogative as the EOS ICO funds holder to use the money as it pleases (it was stipulated in the ICO). While the ENF supports following Block.one’s ideas, the community project states the former has failed to live up to its public pledges.

One of the most prominent pledges made by Block.one’s CEO  Brendan Blumer lies in the promise to invest $1 billion from the ICO revenue to grow the EOS blockchain ecosystem. The funds were to foster budding startups in the ecosystem, improve technological advancements, and boost the marketing of the platform.  But La Rose says that the company devoted much of its funds to investing in unrelated ventures instead, doing little for the EOS ecosystem projects.

ENF is fighting back to reclaim the EOS blockchain

Despite the decline of Eos blockchain, the EOS Network Foundation (ENF) believes there’s still hope for the project to get back to the top. Over the years, the ENF, led by Yves La Rose have been fighting back to gain control of the ICO funds held by Block.one to help build the blockchain, making the EOS community whole. For example, in November 2021, months after Bullish was announced, the ENF announced an ultimatum to the Block.one team to reinvest the ICO money to the blockchain. Additionally, Block.one should gift the intellectual property of EOS to ENF or else block producers would put a halt to a process called “vesting,” which granted Block.one 100 million EOS tokens (~$120 million) staggered over 10 years.

Finally, the ENF also announced they had hired a law firm, which will follow up on Block.one’s actions. The announcement stated ENF aims to “hold  Block.one accountable for its past actions and broken promises”. Notwithstanding, it will review all possible legal recourse to recover the $4.2 billion collected during the ICO.

While it will be tough to convince Block.one to return the ICO money, La Rose and the ENF believe the steps they are taking are in the right direction. According to the community, letting Block.one launch the Bullish exchange could spell the end for any of the ICO money actually being used to develop the EOS network.

In La Rose’s opinion the $9 billion merger of Bullish “ is Block.one’s greatest coup” given they were able to do it legally.