EIP-1559 Activated: What is next for Ethereum?

In the Ethereum’s London hard fork, EIP-1559 has been activated. It is an Ethereum Improvement Protocol which seeks to shine light on the blockchain network’s constant issues with the fees charged for transactions. In simpler terms, EIP-1559 aims to reduce the volatility of the transaction fees, making them more predictable preventing the over-payment of fees from the user’s end.

“1559 is definitely the most important part of London,” Vitalik Buterin, founder of Ethereum stated in an interview with Bloomberg News (from Singapore). The London upgrade is “proof that the Ethereum ecosystem is able to make significant changes”.

The Ethereum Improvement Proposal is centered around two key elements. The first element is the BASE FEE which is a minimum value for the fees gas needed for processing the transactions on the network. This will serve as a new model for the regulation of the transaction fees. This will face an increase if the crypto market is bustling and reduce when the market is calm.

The second core element is the introduction of the inclusion fee which involves a tipping system that is optional, that users can add to the base transaction fee.

If they choose to pay the inclusion fee, miners are allowed to prioritize their transaction over others in the blockchain network. 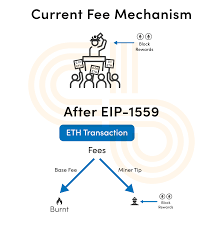 So, what happens next?

Ethereum is planning for its next big upgrade: ETH 2.0

The introduction of the protocol, EIP 1559, does not guarantee users a reduction in the gas fee as the Ethereum blockchain can only manage a limited number of transactions at any given point in time.

With EIP-1559, the fees can rise or fall only by 1.125x per block, which allows for a higher level of stability as well predictability for transactions on the blockchain. This adds restraint to the ETH killers’ appeal towards Ethereum such as Polkadot, Dfinity, and Solana, by cutting down the USP consisting of lower fees and quicker speed.

To summarise, extra transactions fees that used to go to the miners during a network congestion is now being burnt, which reduces the supply of Ethereum. Though it is still not deflationary, it certainly reduced the inflation rate.

With ETH 2.0, Ethereum will be moving to POS model from POW, where miners will not be receiving any gas fee. It will go to stakers who would be staking their Ethereum, and they would be getting a yearly interest of anywhere between 5-7 percent.