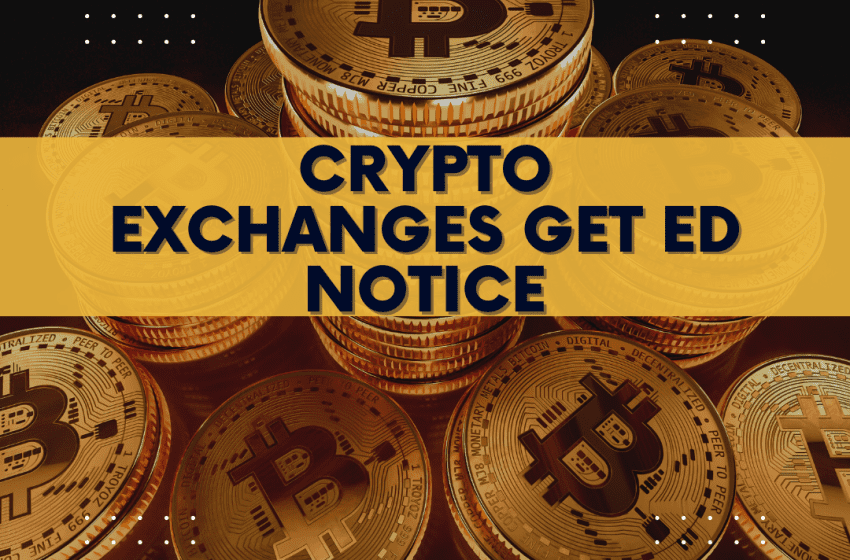 The Directorate of Enforcement has requested additional information and supporting documentation from the cryptocurrency exchanges CoinSwitch Kuber and CoinDCX, an anti-money laundering department of the Indian government. A number of cryptocurrency exchanges have received letters from ED in the course of its ongoing investigation into the alleged cases of foreign exchange irregularities.

The development is part of ED’s ongoing inquiry into money laundering cases using cryptocurrency. One of the most prevalent crimes in the bitcoin sector is Money laundering, and in 2021, thieves laundered $8.6 billion worth of cryptocurrencies, so it is important to keep this in mind. Criminals now have a quicker and safer way to move their illegal money without having to reveal their identities because cryptocurrencies are decentralized assets. Cryptocurrencies were being used unlawfully for commerce, according to RBI deputy governor T. Rabi Sankar, who made the observation in February of this year.

Foreign Exchange Management Act of 1999 is referred to as FEMA. Under FEMA, transactions involving foreign currencies, the sale of foreign securities, payments to or received from persons outside of India are all forbidden. The Act’s goals are to promote the orderly growth and preservation of the Indian forex market as well as to ease international trade and payments.

Even though the cryptocurrency exchanges have not been accused of providing assistance with money laundering, the very nature of cryptocurrencies has drawn attention. Thus, a number of organizations, various government agencies, such as the Income Tax Division and the Narcotics Control Bureau, are investigating crypto businesses. In fact, a recent Chain analysis research went as far as to claim that in 2021, terrorist groups like Al-Qaeda, the Islamic State, Hamas, and Merciful Hands attempted to use bitcoin to provide the money for their activities.

In a similar manner, ED had summoned WazirX a year prior to ask for an explanation of nearly INR 2,800 Cr worth of crypto trades that allegedly violated FEMA laws. Investigations revealed that Chinese people used Tether cryptocurrency to convert INR deposits, and the funds were subsequently transferred to individual Binance wallets to launder proceeds of crime totaling INR 57 Cr., according to the investigating agency. When asked if it had received a show-cause order issued by the investigating body, WazirX had stated that it had not. The Karnataka High Court is currently hearing the case after the company and its director filed a writ petition, and the court issued an interim order. The directive has been followed by us. The case is now pending. Not just WazirX has received a summon of this nature.

According to reports, ED is continuing to look into data on offshore transfers as part of its ongoing investigation into the characteristics of crypto transactions. Under the FEMA, transactions involving foreign currencies, the sale of foreign assets, and payments to or received from anyone outside of India are all forbidden.

A lot has changed in the cryptocurrency industry over the last six months. The ecosystem and its players have been inconsolable since the collapse of Terra’s LUNA, when Bitcoin dropped to one-third of its peak value, when tax legislation on cryptocurrencies were introduced, when CBDC was launched, and when PCI was introduced. The government’s concern over the growing problems with cryptocurrency is understandable. Only last week, Shaktikanta Das, the governor of the RBI, described cryptocurrencies as a significant hazard. Additionally, it is a regular activity for ED and other agencies to contact the cryptocurrency exchanges and conduct investigations or even have conversations about the safety of consumers because they are relatively hard to trace and provide online anonymity.