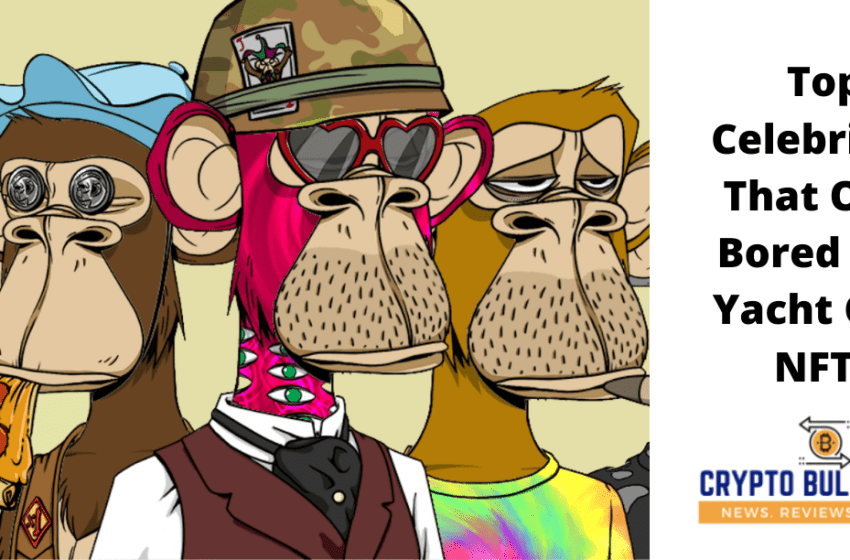 The Bored Ape Yacht Club is a set of 10,000 unique Bored Ape NFTs, which are one-of-a-kind digital collectibles which operate on Ethereum block-chain technology. The Bored Ape also functions as the user’s Yacht Club membership card, effectively giving access to different benefits of membership including the BATHROOM, a form of collaborative graffiti board. By activating the road – map, the community could very well initiate future areas along with additional benefits.

Its own celebrity-studded list contains Jimmy Fallon, Steph Curry, and Post Malone. Users can currently pay for a Bored Ape Yacht Club NFT for 52 ether, or $210,000, which is the lowest price.

The Tonight Show host, Jimmy Fallon, disclosed how he had aped into the collection. He then announced the purchase of Bored Ape #599.

In November, Fallon declared to his 51 million Twitter followers that he had purchased approximately $224,000 in ETH as well as captioned the picture, ‘Permission to come a bored?’ He announced recently that he’s been branching out into Mutant Apes too.

Fallon’s ape has a blue background (12 percent of Apes), a navy striped shirt (3 percent), heart sunglasses (4 percent), cream fur (6 percent), as well as a sea captain’s hat (3 percent). Jimmy Fallon purchased his Ape for 46.6 ETH through the cryptocurrency app Moonpay. Moonpay is a platform that lets people easily purchase NFTs without any need for DApps such as Opensea.

Stephen Curry is one of the most well-known athletes to have purchased the BAYC NFT. When Steph Curry joined the Bored Ape Yacht Club in August 2021, he was one of the greatest influential sports icons to have managed to enter the NFT world. Even though he wasn’t even the first sports celebrity to buy an Ape, his investment sparked a wave of enthusiasm among the NFT community.

The co-creator of the Holey Moley TV show as well as three-time NBA champion purchased his Board ape NFT for approximately $180,000 in ETH at the moment of purchase. He was spotted on the project’s official Discord server immediately after the purchase.

Post Malone, a recent addition to this list, has changed his Twitter profile image to a Bored App. Post Malone, a singer as well as songwriter, purchased two Bored Ape Yacht Club NFTs for more than $700,000. Post’s ape has zombie fur as well as a cowboy hat, among other distinguishing features. MoonPay, a cryptocurrency payment processor, trolled the Weeknd with a tiktok video, mocking him for purchasing a Bored Ape as well as conversing about it.

Fallon’s purchase was also handled by the cryptocurrency payment processor, possibly as part of a celebrity marketing campaign. Malone appeared pleased in the video, but he has yet to comment on the purchase.

Timbaland, the iconic hip-hop producer, also has joined the bored ape yacht club by introducing his own Ethereum music NFTs which can be mixed as well as matched.

His profile picture on Twitter disclosed that he really is Bored Ape #590. He officially unveiled Ape-In Productions, which will also create virtual music groups as well as animation with avatars from BkrBkred Ale NFTs.

For a long time, the chaimsmokers had also made an investment in many startups as well as being involved in the cryptocurrency world. The DJ generating duo aped into the Bored ape NFT in September for around $210,000. They’ve been on such a Twitter hiatus since early 2020, but that hasn’t stopped them from adding their Twitter profile pic to the Bored Ape NFT.

The DJ, recognised for his mask-wearing looks, entered the crypto space in September with the acquisition of a rainbow-teeth NFT for an approximate $220,000 in ETH at the time. Marsh has indeed tweeted about CrypToadz, implying that he may be experimenting with some other NFT projects.

Logan Paul, a social media vlogger, is investing heavily in NFTs, as is his brother, Jake. He remains limited to CryptoPunks, owning a few and even transforming one into jewellery. But even so, he also has a Bored ape wallet including several knock-offs that were most likely delivered to his wallet without his knowledge.

He has over 4,000 NFTs in his wallet, with a steady stream being sent in by partners looking to expand their projects.

Mike Shinoda, a Linkin Park rapper as well as solo musician, not only collects NFTs as well as displays them on his Audius profile (which also includes several Mutant Apes). He also invents his own. He has issued a number of NFTs, most notably through the Tezos marketplace, Hic et Nunc, which was recently shut down.

Shinoda commonly streams on Twitch as well as releases NFTs of artwork created live. He is also very excited about the future of cryptocurrency.

Shaquille O’Neal, a former four-time NBA champion, does own an NFT from the Mutant Ape Hatch Club spinoff collection. In September, he paid a relatively low price of $14,000 in ETH for the Mutant ape. His OpenSea wallet title is ‘manofdominance,’ which reflects his renowned bigger personality.

Shaw temporarily used a Creature World NFT as his Twitter avatar even while launching his own NFTs via the Eternity Chain launch pad.

Shawn Yue, an actor, singer, as well as former model, has consistently flown under the radar as among the most renowned Bored Ape Yacht Club members. With such a large NFT collection that includes Apes as well as CryptoPunks, it’s no shock that perhaps the Hong Kong talent has had an Ape as of June 2021.

Dez Bryant was the only one of a few NFL players who has decided to join the Bored Ape Yacht Club. The Baltimore Ravens wide receiver was just an early adopter of BAYC, buying his Ape in July, before so many other celebrities displayed involvement in the project.

Dominique Armani Jones, better known as Lil Baby, is indeed an American rapper who does own both a Mutant Ape as well as a Bored Ape in his NFT collection. He tweeted about his purchases to his 5.8 million Twitter followers, as well as he presently has his Mutant Ape as his profile picture. Lil Baby paid 38 Ethereum for his Bored Ape, which is now worth an estimated approximately 70 Ethereum, or $300,000, just at the moment of typing.

Adam Draper, Managing Director of Boost VC as well as Venture Capitalist, bought Bored Ape #9132 as well as seems to be using it as his Twitter profile picture. He wrote on twitter that he wants to support the founding members of Bored Apes in order to show his assistance for the community. Draper’s Ape has been bought for 54 Ethereum, which really is equivalent to more than $200,000 USD.

Danny, also recognised on Twitter as @seedphrase, recently bought his first Bored Ape. Danny is an eager NFT collector whose collection is valued in the millions of dollars. Danny’s standout feature is his CryptoPunk, the collection’s most rare Punk. Danny was provided $20 million for his NFT as the only Punk with all seven traits, and yet he turned down. He paid a premium because he bought an Ape with seven attributes. Danny purchased his Bored Ape Yacht Club NFT for 100 Ethereum ($420,000).

Steve Aoki, an EDM artist, seems to own numerous NFTs, along with a CryptoPunk as well as a Bored Ape Yacht Club. He’s as well announced his own NFT collection which has been a part of the NFT community for way too long than that of the majority of celebrity Ape holders. Aoki paid 49 Ethereum for BAYC #8716. Aoki’s ape has notable features such as the aforementioned eyes, a lumberjack shirt, as well as a fisherman’s hat.

You may think NFTs are bizarre and harmful to the environment, but the Bored Apes aren’t going to stop anytime soon.