Bitcoin trades below $24,000; BNB, Polkadot, and Uniswap all experience a 2% decline 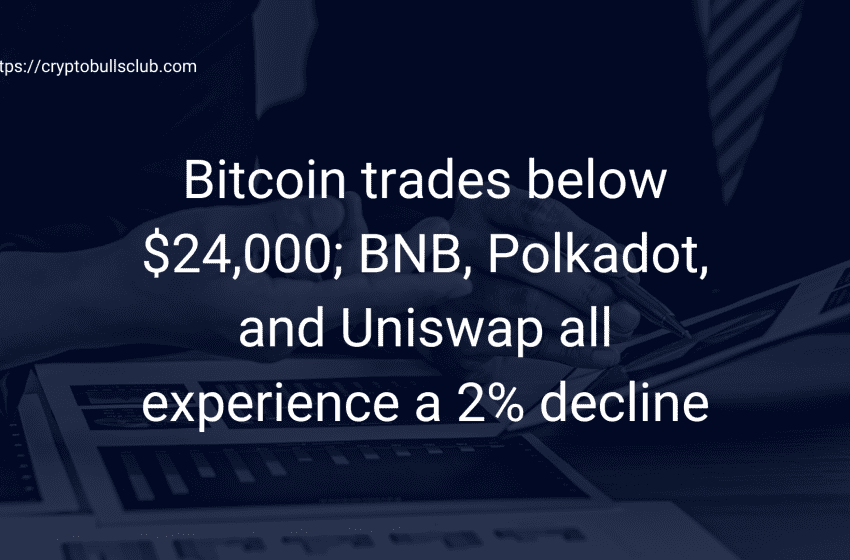 Leading cryptocurrencies traded in negative territory on Friday, a day after they had rallied, as some investors booked profits. While Ethereum maintained steady at $1,900 in advance of its eagerly anticipated merger rumors, the most widely used cryptocurrency in the world, Bitcoin, was trading below $24,000. The overall volume of the crypto market dropped by 1.57%. Avalanche and Solana fell 4% each, while Polygon, BNB, Cardano, Polkadot, and Bitcoin all fell 3%. These two tokens were among the top crypto assets. Less than 1% was lost in the previous day, with the market capitalization of all cryptocurrencies trading slightly lower at $1.15 trillion. The entire trading volume, however, was close to $84.03 billion, or more than 4% of the market.

Is there any reason to be concerned?

The latest humiliations for the cryptocurrency sector included news that Indian regulators were looking into at least 10 exchanges for allegedly helping foreign companies use cryptocurrency to launder money.

May and June saw a sharp decline in the value of cryptocurrencies as investors fled riskier investments due to concerns over soaring inflation and Fed Reserve interest rate rises. Some cryptocurrency lenders blocked customer withdrawals in the wake of the demise of a significant pair of coins, and several crypto businesses made employment cuts. Bitcoin saw a 17% gain in July, suggesting a partial recovery in price. From a low of $880 in June, ether has surged to over $1,900.

The price of bitcoin surged up to about $25,000 on the cryptocurrency markets. The developer community has made rumors about an Ethereum merger taking place earlier than intended. With the debut of direct Bitcoin spot exposure, BlackRock, the greatest asset company in the world, demonstrated that institutional investors still have a sizeable amount of interest in digital assets despite the market’s sharp decline. The pace of recuperation is anticipated to increase over time.