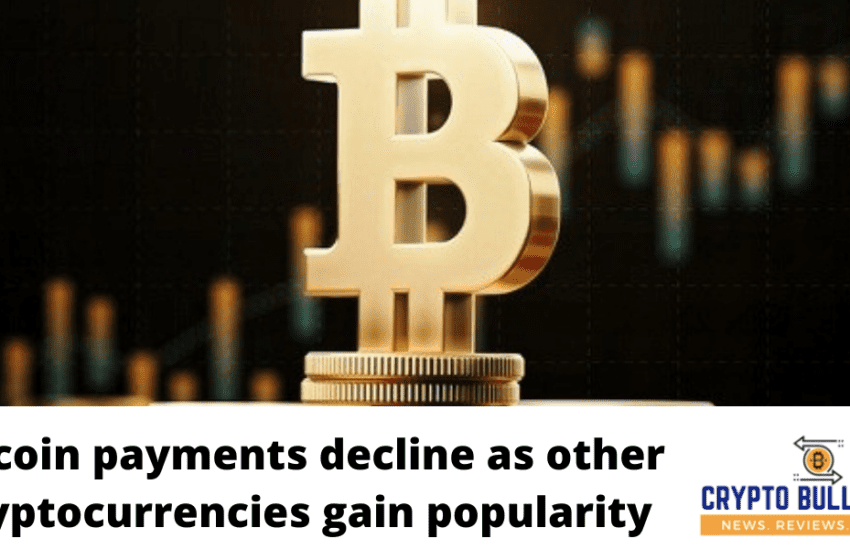 Bengaluru,  January 18th, 2022: As per the BitPay Inc. which is among the world’s largest crypto payment providers, users as well as companies are rapidly turning to digital tokens apart from Bitcoin for payments. Such huge fluctuations in bitcoin which have also been pummeled recently, are increasing concerns about the hazards of investing in them and their long-term viability in the form of financial assets. Read more to know why the bitcoin payments are declining.

Businesses have started to replace giant cryptocurrencies such Bitcoin with stablecoins, particularly for cross-border payments, due to the volatility nature of the cryptocurrency industry. Alternative cryptocurrencies to Bitcoin are known as “altcoins.” Altcoins like Ether, Litecoin, as well as Dash are experiencing exponential growth among investors.

Bitcoin’s being used at BitPay merchants fell to roughly 65% of processed transactions the year before, dropping from 92% in 2020, according to the firm. Ether purchases made up 15% of the total, stablecoin purchases made up 13%, while new coins launched to BitPay in 2021 — Dogecoin, Shiba Inu, as well as Litecoin — made up 3%.

What Exactly are Stablecoins?

The uncertainty of the bitcoin market is well-known. That implies that coin prices can quickly move up and down, making it extremely difficult for consumers to decide whether or not to invest or buy a particular coin or not. Stablecoin, on the other hand, overcomes this problem. Stablecoins are virtual currencies supported by fiat currency, other cryptocurrencies, or gold. These coins’ prices remain consistent due to their stable holdings, which make them less sensitive to price fluctuations. A computer programme is also used by certain stablecoins to keep its value relatively stable.

Stablecoins have the benefit of being constructed to endure instability in a manner that some other cryptocurrencies are not. It might provide access and mobility. It’s a much more stable and decentralised cryptocurrency. This means that it is not a part of a centralised system or organisation. As a result, it gains authority.

Stablecoins should be considered as a sort of digital cash. It is, nevertheless, still just a cryptocurrency, despite its stability. As a result, it would still be a relatively new entity with unknown risks.

The growing importance of stablecoins has aided in the adoption of alternative coins as methods of payment. Dogecoin (DOGE), for instance, rose to prominence the year before due to its supporters, including Tesla CEO Elon Musk, who revealed that DOGE can be used to purchase Tesla-related items.

Individuals are hoarding Bitcoin instead of spending it, according to the trend. Irrespective of the instability in the fourth quarter, Bitcoin prices surged by 60% in 2021. The large portion of last year’s cryptocurrency purchases, according to BitPay, were all in luxury commodities including such jewellery, watches, as well as automobiles.

BitPay is the world’s first and perhaps the most professional bitcoin payment organization, and it creates strong tools for spending, receiving, as well as building with bitcoin. BitPay was established in 2011, when Bitcoin was in its early stages. We recognized bitcoin’s potential to revolutionise the banking system by making money transfer faster globally, more safe, and far less costly. It is developing blockchain payment technology to revolutionise how companies and individuals transmit, receive, as well as store money globally.