Is the Bitcoin Dump coming in August? Mt. Gox Bitcoins to be distributed? 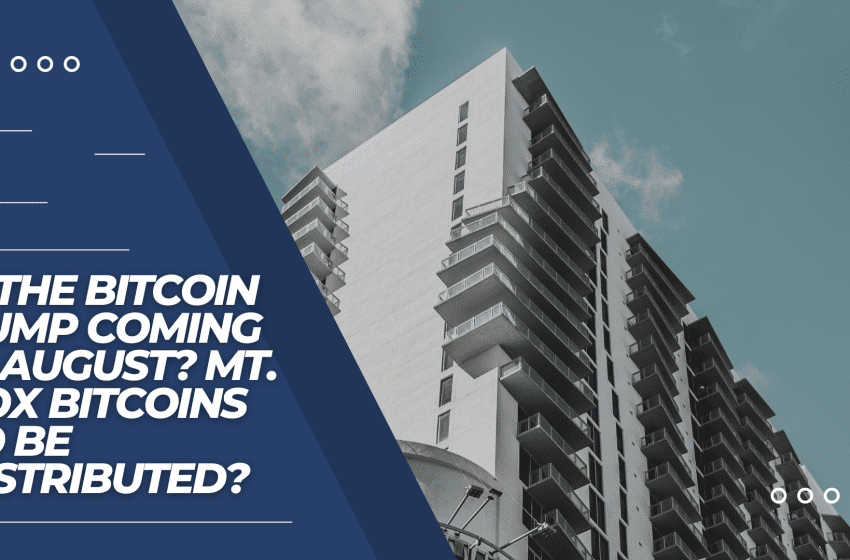 Near-term customers of the Mt. Gox trading platform are about to receive their Bitcoin back, posing a new threat to the cryptocurrency. Nobuaki Kobayashi, an attorney who was named trustee in the Mt. Gox, said in a fresh letter dated July 6 that he is getting ready to reimburse the exchange’s account holders. 137,000 BTC, or around $2.8 billion, will soon be made accessible on the market in reaction to the 2011 Mt. Gox attack, which led to the loss of 850,000 BTC valued at about $17.8 billion at the current pricing. 200,000 Bitcoins were discovered by Mt. Gox in 2014, however as of this writing, those coins are still being held captive by legal proceedings.

In addition to the mode of payment, creditors should also decide whether or not to accept an Early Lump-Sum Repayment. The payback schedule has not been determined.

Just what is Mt. Gox?

Tokyo, Japan is home to the bitcoin trading platform Mt. Gox. It was established in July 2010 and, as the largest bitcoin middleman and exchange, facilitated over 70% of all Bitcoin payments globally in 2013, 2014, and 2013. world’s best. Mt. Gox filed for bankruptcy protection from creditors in February 2014 and immediately halted trading, closed down its website, and provided exchange services. A bankruptcy case was filed by the business in April 2014.

Will the Mt. Gox coins impact the price of bitcoin?

According to analysts, a lot of investors are worried that the dispersal of 137,000 BTC can create a catastrophic decrease in the price of Bitcoin due to increased sell pressure. Even those who believe that the Ethereum merger and a drop in the value of Bitcoin will lead to the fulfilment of the Flippening have put out this notion. If the price of Bitcoin falls to $10,000 while the price of Ethereum rises by 30% from its current level, a hypothetical event known as The Flippening could take place.

When the coins are sold, that may have an impact on the price of Bitcoin, which has dropped significantly recently as a result of the Terra blockchain failure and the bankruptcy of crypto firms like hedge fund Three Arrows Capital. Additionally, the trustee stated that beginning at the end of August, it will not accept any claims or transfers until all or a portion of the initial repayments made for secure and safe Repayments has been fulfilled.

If rehabilitation claims are transferred throughout the Assignment, etc. Restriction Reference Period, both transferors’ and transferees’ access to the System will be suspended. It might prohibit you from completing the Choice and Registration, make your repayment date much later than that of other rehabilitation creditors, or, at worst, lead to your repayment amount being deposited with the Tokyo Legal Affairs Bureau in line with relevant rules and regulations.